What with the British winter being well and truly with us there will, no doubt be quite a lot of indoor shots in my posts for the next few months. But if they are all as much fun to take as this selection shot at Empire Skatepark in Colchester, Essex on a skate only night, I'll have a great winter! 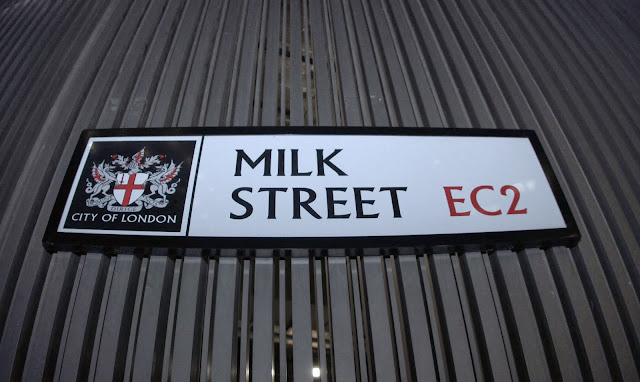 This Sunday was a little different to the now familiar skate mission format, as this week I had a brief.
Milk Skateboards were looking for a shot taken on Milk Street, EC2 to accompany a new board design in the latest catalogue.
On arrival in London, we parked in the usual spot and on leaving the car park, met Nate who was shopping with his wife and just happened to be passing. We skated straight to Milk Street.
The streets of St. Paul's were eerily deserted, we had rarely gifted freedom to skate around in the roads which was a novel experience as this part of London is usually rammed with busses, taxis and the inevitable swarms of tourists and cyclists. Still, I have no idea why it was so quiet.
The shoot went off with little trouble. Once Harley & Sam had worked something out I placed myself as low and close as my lens would allow.
Both Sam and Harley pulled some fun wallie variations out of their respective bags. I got the shots and away we went.
We spent the rest of the afternoon skating around, finding spots and pretty much immediately getting ejected from said spots by the usual rent-a-jobsworths. One rail in particular deserves a return visit. I hope I'll get to show you that soon.

So, dear reader, as you will see from my last post I have learnt something new this weekend. This means that I can show you some previously unseen sequence shots taken on the Milk Skateboards spring trip to Copenhagen.
First off is Mikey Joyce (Witchcraft).
This was the pretty much the first spot we visited on arrival in Denmark. Mikey got up top early and pulled this out of the bag. The roll out was absolutely covered in predatory pebbles just waiting to pounce under the wheel of an off balance skater. Surprisingly we all escaped capture.

This next spot has to be credited to Sam Hayter & Fuller.
We stopped, late in the day for pizza and drink at the end of a block of pretty under-developed residential streets and decaying uninhabited industrial areas.
Sitting on our boards eating slices from our knees we noticed that both Sam and Fuller had disappeared.
Moments after commenting on this, we saw both their grinning heads poke through a hole in the fence a few metres up from where we were sitting. "We've found a spot!"
Tucked behind a high fence were a number of overgrown concrete bases and loading bays, all that remained to show that once, life was lived and work done in this space....
And someone had kindly made us a ledge!

The final sequence was shot late in the trip. Some of the crew had expressed a wish to visit this apparently famous spot. I have to admit, I wouldn't be able to name either a trick filmed here or a video the spot has appeared in.
You will however be able to see some more of Charlie at this spot in the full length Milk Skateboards Video due mid next year.
Petty told me that the rails were new and larger than in the clips he'd seen but Charlie managed fine, rolling away from a number of examples of tech sorcery. 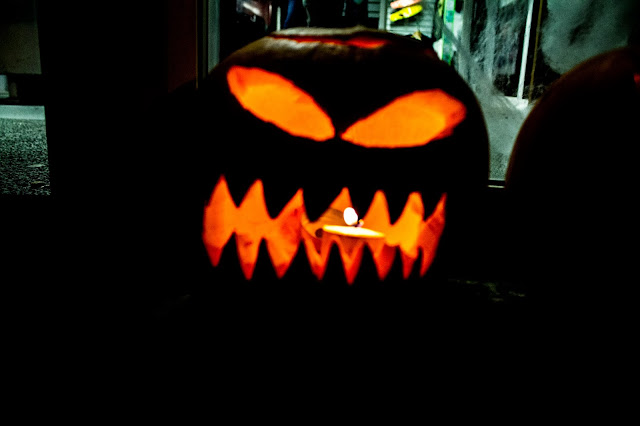 A festive feel to this post as on Saturday Empire Skatepark in Colchester, Essex hosted their annual Halloween jam.


With refreshments provided by amigo Mikey Joyce at the Kiki cocktail bar and decorations of quality by the park staff and friends. Fancy dress was not compulsory, but some excelled all the same! 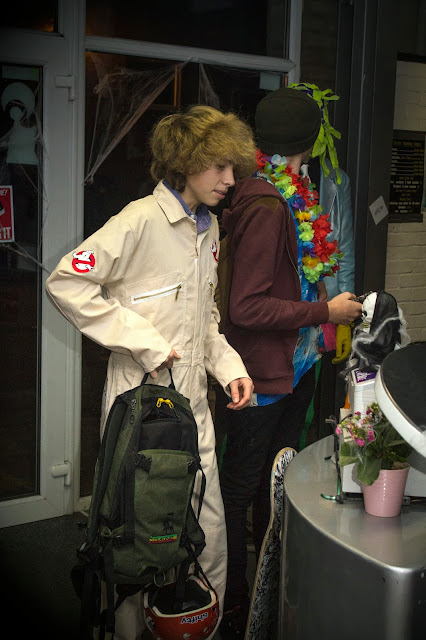 One of the park staff, Harry Wilson decided to dress as Blackwell for the night. This led to a surreal scene as Mikey, dressed as a Mexican bandito proceeded to apply as many of Lee's tattoos as he could to a regularly dressed Harry using a photo as reference with a permanent black marker, sitting next to a crocodile and The Joker on the sofa.
At the mid point of covering one of Harry's forearms, Blackwell turned up dressed as Brandon Lee (off of The Crow). He immediately picked up a second marker and attacked Harry's other arm and neck using his own tattoos as reference. As I say, surreal.
After changing into some Blackwell-esque gear, provided by the man himself, Harry emerged from the kitchen in a long black wig, the transformation was complete. I laughed my arse off for a good minute before I could focus a descent photo! 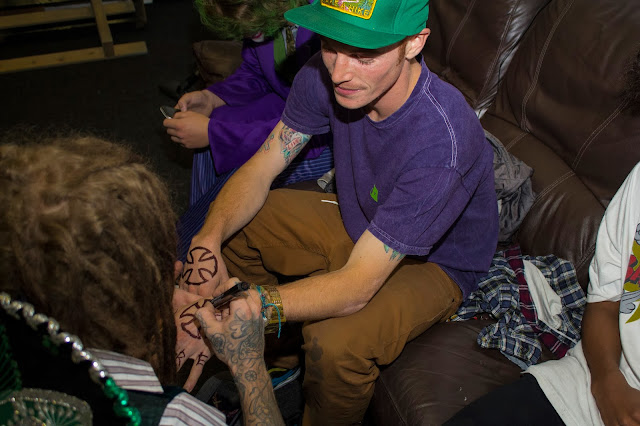 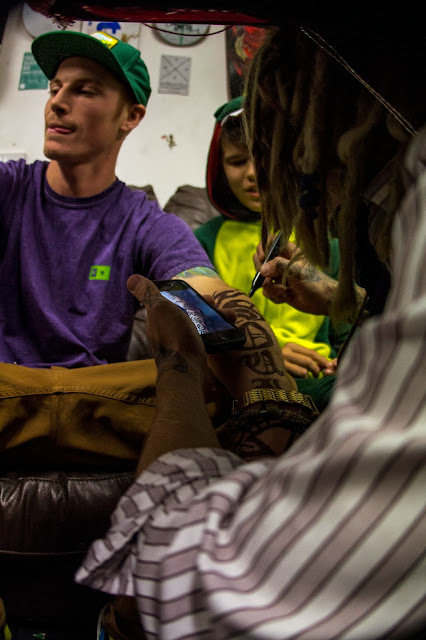 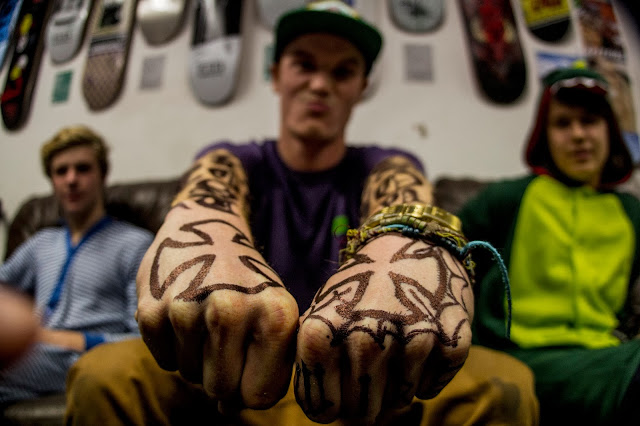 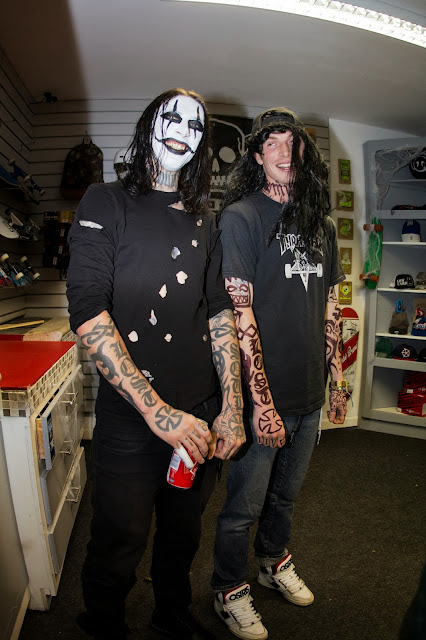 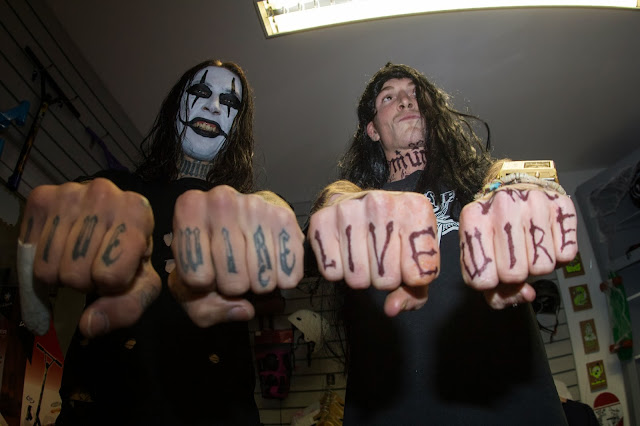 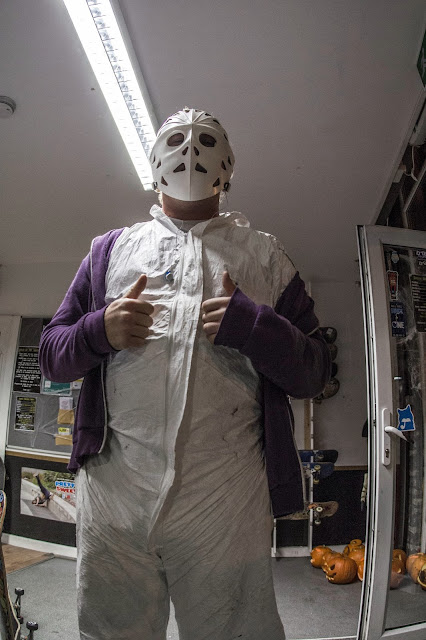 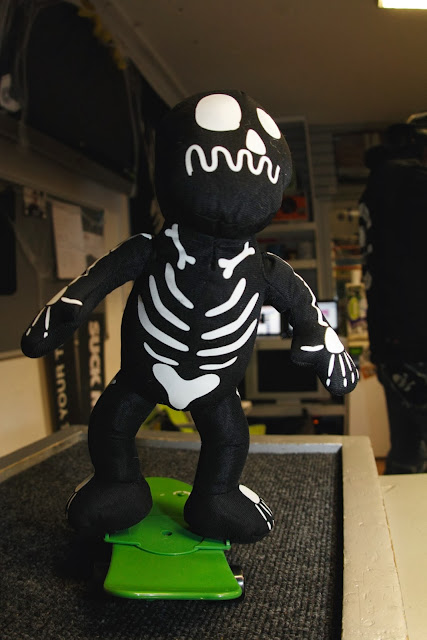 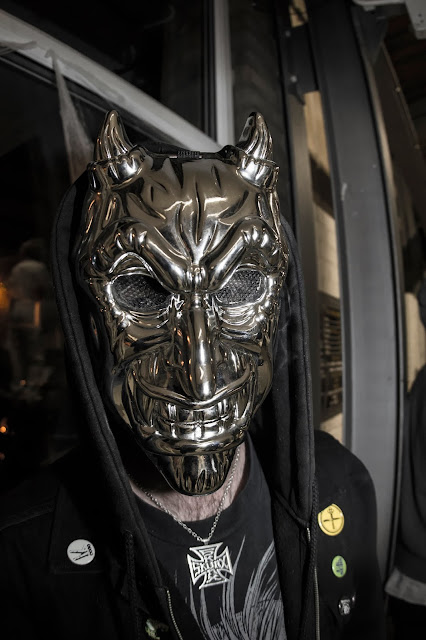 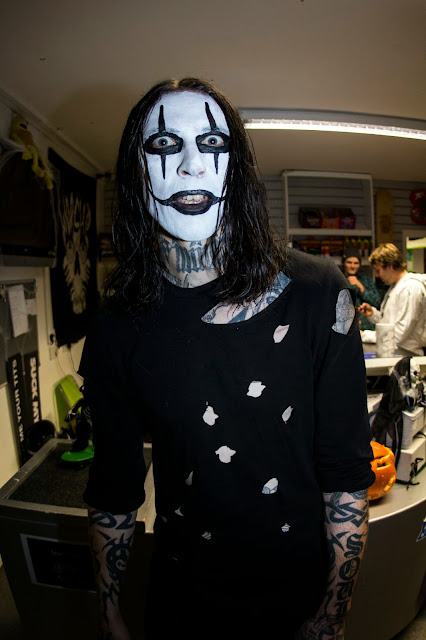 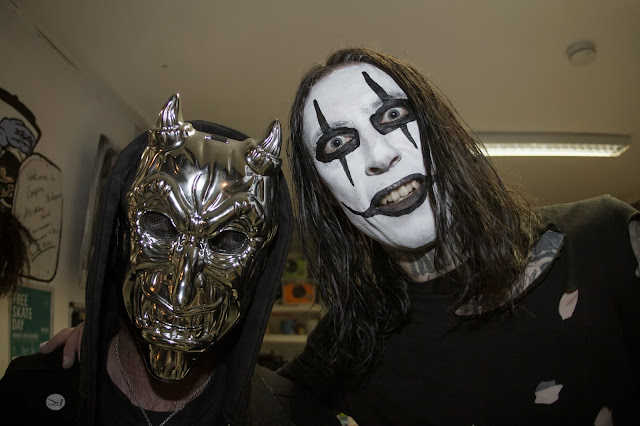 After a good amount of booze had been consumed and everyone had upped their games with the effects, a best trick comp went down on the micro mini in front of the kiki bar. I'm not sure if there was an overall winner, but prizes were given, rewarding some tech trickery and wall associated gnarliness alike and many a spectator's shin were hit. 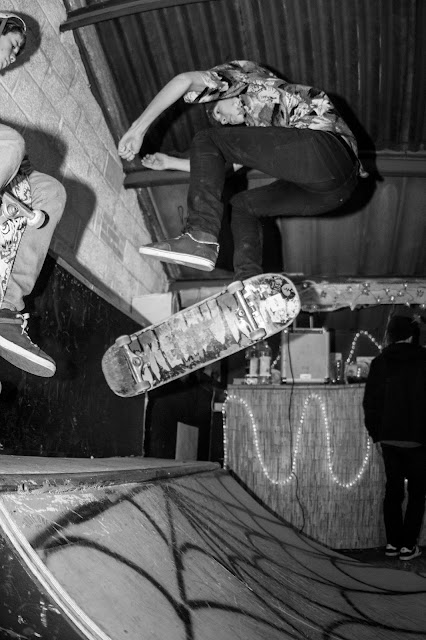 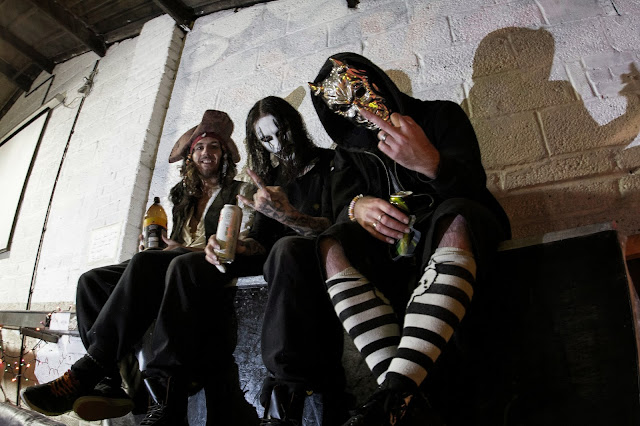 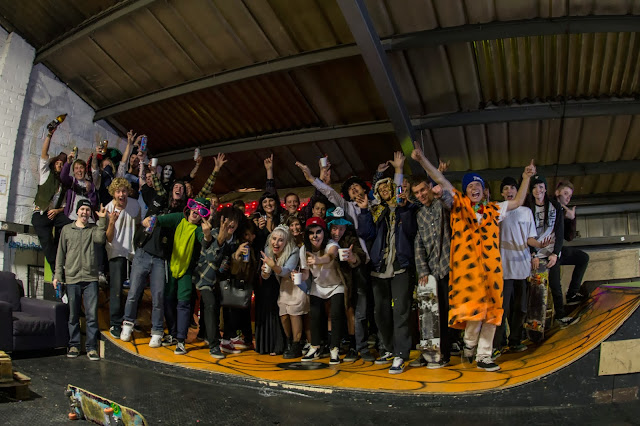 Empire Skatepark in Colchester, Essex was one of four parks across the UK to take part in this great annual event. Now in it's fourth year, this event is a great opportunity for skaters to get parks to themselves for the day with no entry fees. And Route One were giving away prizes for the usual random acts and gnar.

I popped down for the afternoon and evening, skated a little and shot some frames. 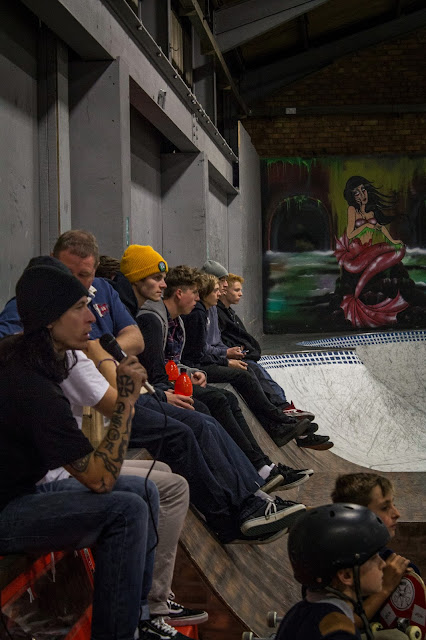 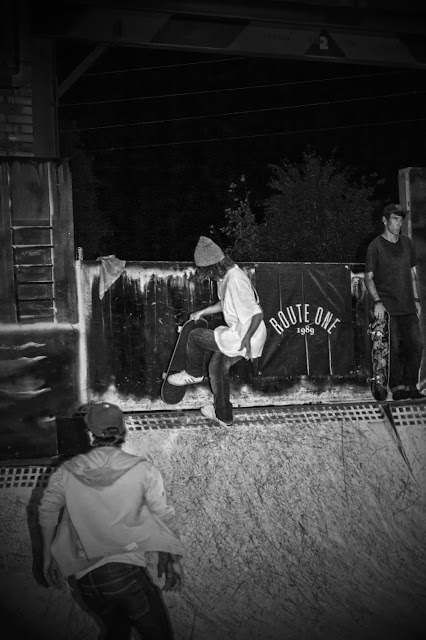 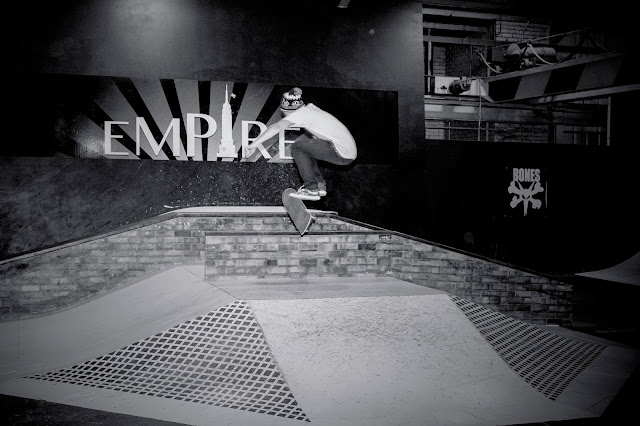 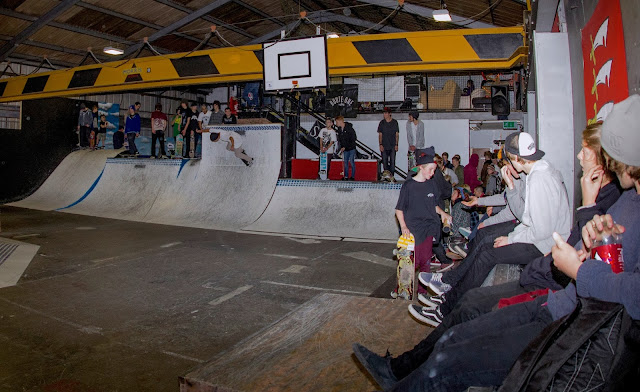 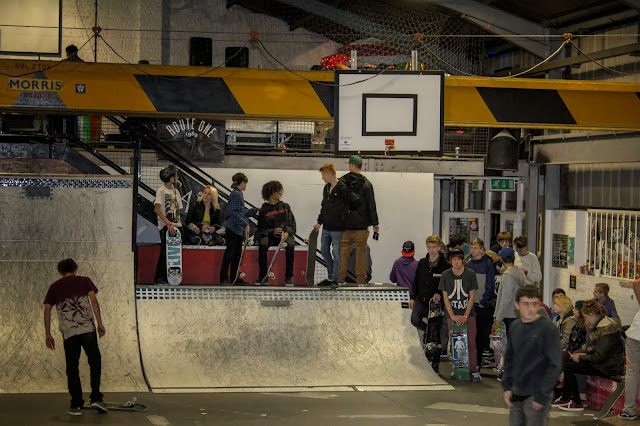