Some Friends of Mine

I've been digging around in the attic that is my hard drive and uprooted some little beauties.

First off, a couple of Mikey Joyce.
Since the opening of Empire Skatepark in Colchester (formerly RampRage), I've got to skate with Mikey a little. He's a legend, an all out machine. And he'll b/s smith pretty much anything! He came along for the ride on the recent Milk Skateboards CPH trip.

These two were taken at what's known as the Hullet bowl. Hidden in an isolated wood on a busy intersection in Copenhagen, Denmark, this place is a huge DIY concrete monster. It was built with help from the designers of Faellenparken, also in CPH, so it's smooth and steep. Worth a visit if you can find it.
Just remember to bring beers for the locals!

This next one is of young skater Jake Royal. He's a Bury St. Edmunds local and a little ripper!
Taken at a now shutdown DIY project in an empty unit in Bury.


These three were taken on a doomed mission to Lowestoft early this year.
We arrived at the concrete park to find soaked transitions, so we went searching for spots around the town.
The temperature was near zero and the sea fog closed in around us before long. We ended up at the sea wall and this bank.


This guy is always a pleasure to skate and shoot with.
Long-time Bury local Harley Miller skating his local park in the sun.
This park is soon to be demolished and replaced with a concrete construction. Local skaters & riders, coordinated by local skater/rider owned shop Hardcore Hobbies worked in partnership with West Suffolk Council to secure funds and design the park which is  scheduled for completion in October 2013.

(This one was used for a poster ad. by Empire Skatepark recently.)

I love the shadows in this one. Night shoots are my favourite skate shoots.
This was taken on a rail under the Westway flyover between sessions at the nearby Bay Sixty6 skatepark in London.
Charlie destroys rails and stairs and this one was no exception.

These last three are the most recent in this post, taken last week.
This spot is known as The Blue Bowl. It is blue, but it's not a bowl.
It is however located on the edge of a small play park in one of the less impressive residential estates in Cambridge, and always covered in broken glass.
This is about as getto as my local skate scene gets.

Some photos of Fuller getting in the air a few weeks ago on a 20+ year old metal ramp (RareUnit) in Bishop Stortford, UK.

I grew up skating a ramp just like this a few miles down the road in Chelmsford. I never got as far above the extension as this...

Since the recent coverage on the BBC openly named the location, I feel I am now able to share an experience I will never forget.

I work in a Norfolk town which has had it's fair share of fame over the years; Known traditionally as royal residence of Iceni Queen Boadicea, steam engineers Charles Burrell & Sons produced engines and agricultural machinery in the town from the 1700s through until 1928 and it became the fictional town of Walmington-on-Sea in the classic BBC comedy, Dad's Army. Not to mention Grimes Graves, a neolithic mine found close to the town lifting the materials for the manufacture of flint tools some of which have been discovered as far afield as the Outer Hebrides and the ancient gold hoard found in 1979.

Now, there is a whole new reason for this small Norfolk town to hit the news, wild otters.
Since moving to the area from Essex around 13 years ago, I have always heard whispers of this illusive animal in waters in and around Thetford, but until February this year I had yet to sight an otter anywhere in the wild and considering the persecution the species was subjected to in the 50s to late 70s and pollution - devastating declining their numbers, I was not wholly confident that a wild sighting was ever going to be a reality - These animals are usually very secretive and generally nocturnal. However, Otters are now known to be breading in every county in England...

My route home from work takes me through the old part of Thetford - round Castle Hill (ancient castle mound), across the three Nuns Bridges, past the BTO (British Trust for Ornithology) centre and the riverside car park frequented by dog walkers, bird watchers and alike.
On this particular day, as I passed the car park I noticed it was brimming with cars, and a number of camouflage adorned bodies with long, grey lenses hanging from their necks. A sure sign that something was going on!
I quickly U-turned and grabbed a lucky spot in the now rammed car park as one of the aforementioned dog walkers vacated a space, fitted my walking boots, coat, scarf, hat, gloves and unpacked my camera, imagining that, as with most wildlife photography (from my experience), I was unlikely to get very close to what I was shooting and fitted the longest lens I own.
Once batteries etc. had been double checked, I had a chat with one of the camouflaged brigade and found out that there was a new arrival by The Bridge pub, on the pedestrian bridge, a Black Bellied Dipper. I scurried off up the road to the area he'd mentioned and spotted a number of grey lenses in the distance as I approached the bridge.
To my surprise, on my arrival I could see a small black bird, with flashes of white on a small cement outcrop at the base of the ancient bridge, bobbing up and down and occasionally diving into the fast lowing, rain-swollen river and a very excited bunch of birders. 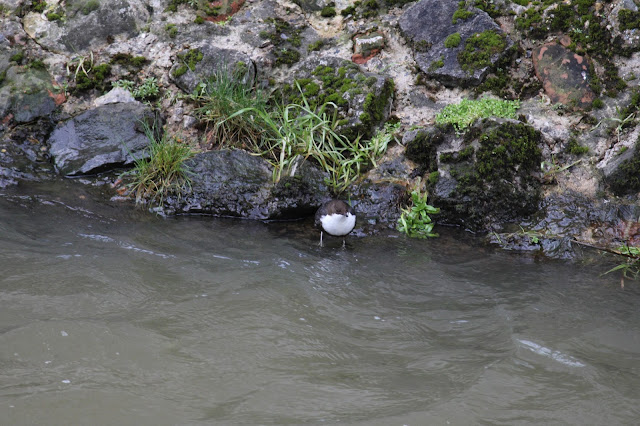 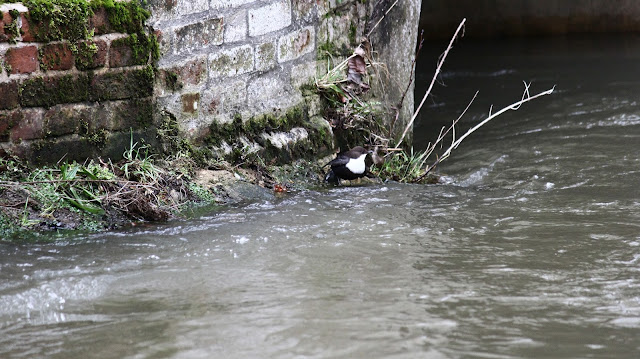 After watching and shooting for 15-20 minutes, one of the great grey lens wielders asked casually if I'd seen the otters, pointing down-stream.
Following a short conversion about how rare it was to see this bird on english soil and that it had presumably blown off course (I admit that this was solely out of politeness as I had completely lost interest in this little winged visitor on the mention of the 'O' word!), I carefully picked my way down-stream along the path littered with last years nettles, tall grass and cow parsley stems, back towards my parking spot approximately a mile away.
Only just out of sight of the bridge I found a group of 3 men in camouflage and a lady with a heavily breathing springer spaniel straining at the lead standing on the bank, pointing. I followed there line of sight, and to my absolute astonishment spotted two long, brown humps moving along the opposite bank towards us. Otters.
I took my lens cap off and raised my camera to my eye and for the first five minutes I shook with excitement and didn't get a single decent picture! But eventually, I calmed down enough to record a genuinely memorable 30 minutes. 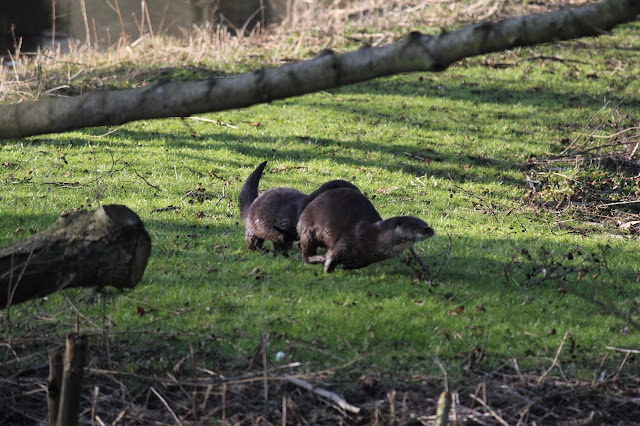 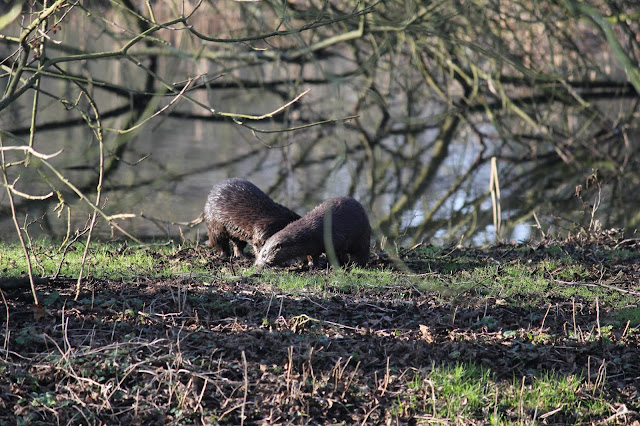 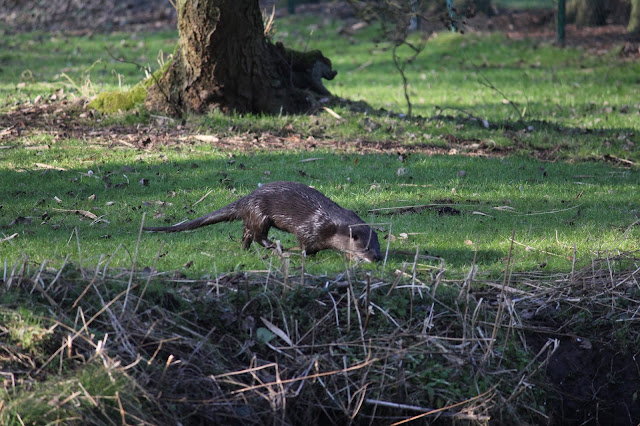 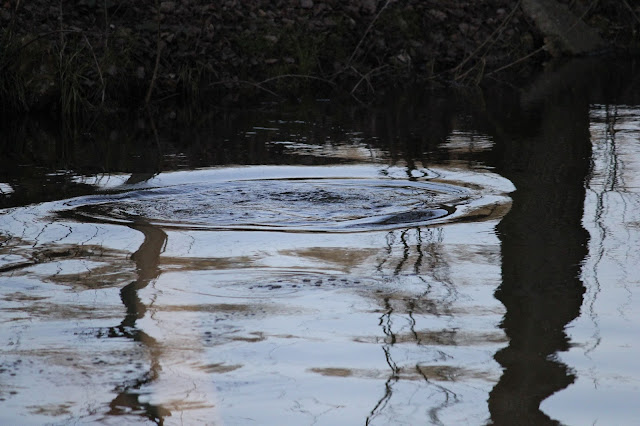 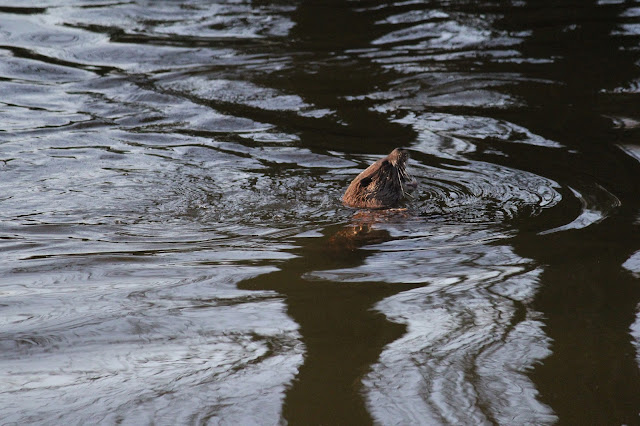 It was at this point that I realised I was in no need of a long lens.
One of the otters swam right up to the bank I was perched on, dived, came up with a fish and proceeded to roll onto it's back and swam past, no further than 4 feet from me, eating it's catch.
My camera was switched off and I watched greedily for another 40 minutes or so as the pair played, groomed and ate right in front of me before disappearing up stream, meaning not to be followed.

Since this chance encounter I have made numerous visits back to watch further this amazing pair and what I am told is a separate male in their natural habitat with varying levels of success.
On one occasion they completely eluded me for 4 hours, on another I walked up and down stream with the pair for more than 2 hours. In broad daylight, with no camouflage.
The need for camouflage and a big long lens (with camouflage fabric liner as is the trend) seems to be essential to the hardcore enthusiasts of wildlife photography, but that is a subject for a whole different post.

There is continued interest in the otters from local residents and further afield, and efforts are made by BTO and other organisations to sustain the environment required to support them. But recent events have put the otters at risk.
A bungled diesel theft resulted in a large quantity being deposited in the river. Immediately the BTO attempted to reduce the level of use in the areas affected - public feeding of birds was stopped for a short time on and around Button Island and the Environment Agency were seen clearing the affected waters for a sustained period in May/June.
Hopefully, this incident has not detrimentally affected the otters or indeed any other wildlife reliant on the rivers of Thetford.

What follows is a selection of shots from different areas of the river(s) in and around Thetford of these incredibly graceful and beautiful animals that I continue to visit and watch for endless hours. As these animals have many holts up and down the river it's never a sure thing, although once you find them they are never camera shy! 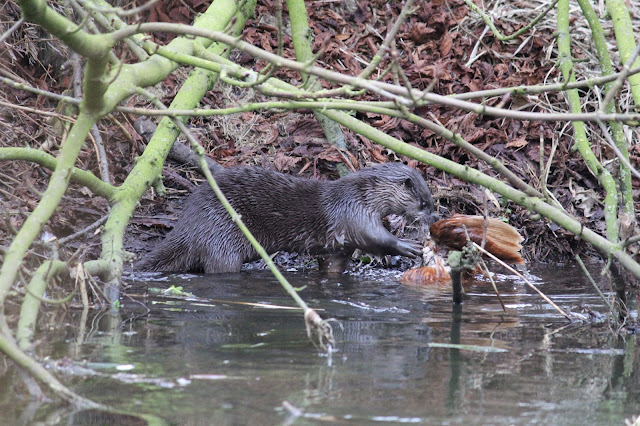 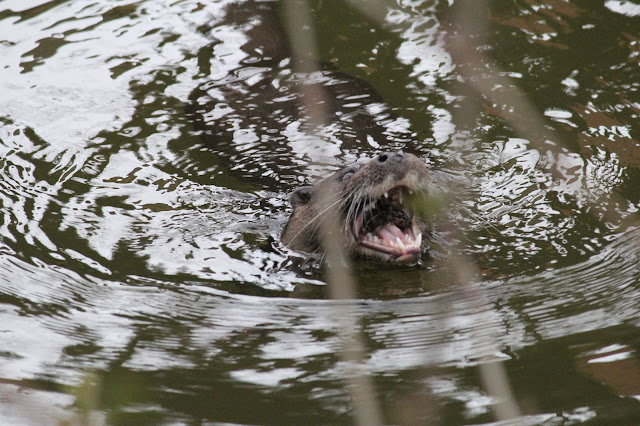 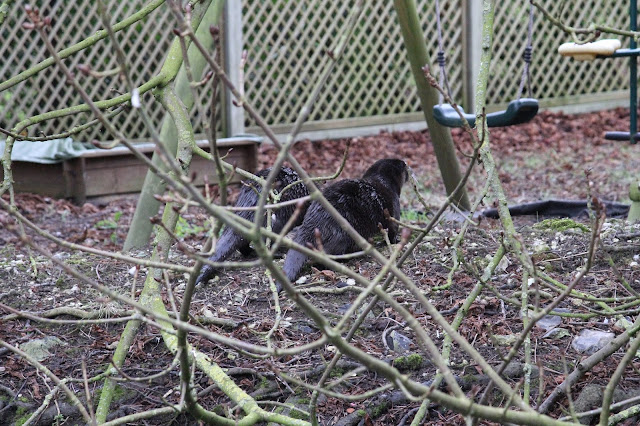 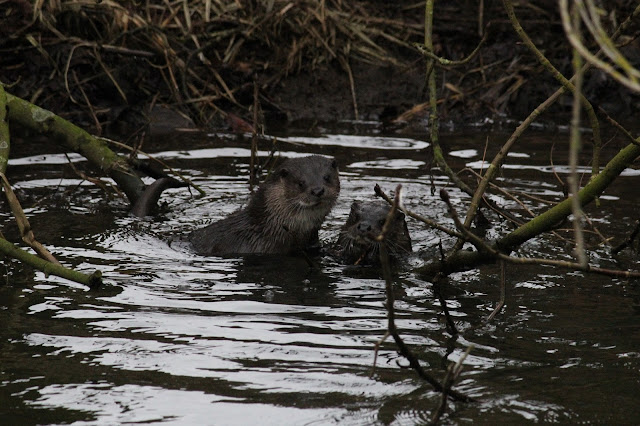 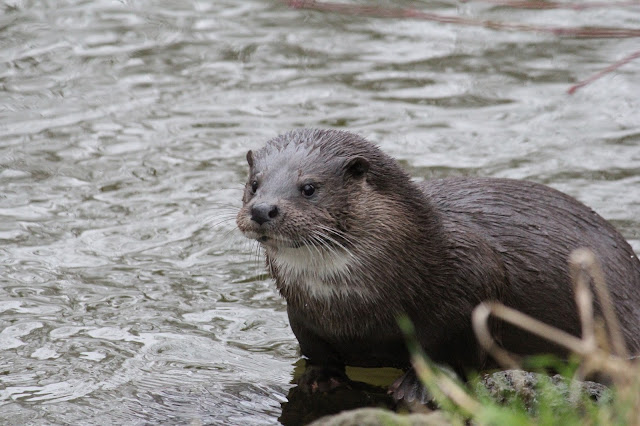 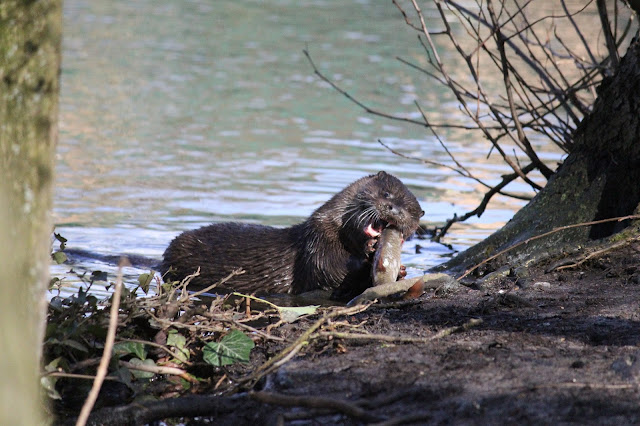 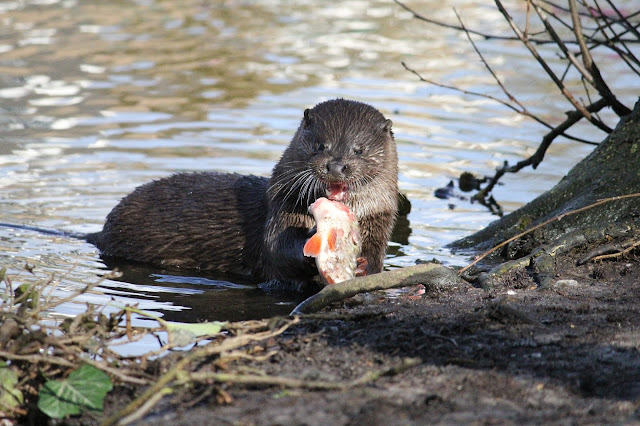 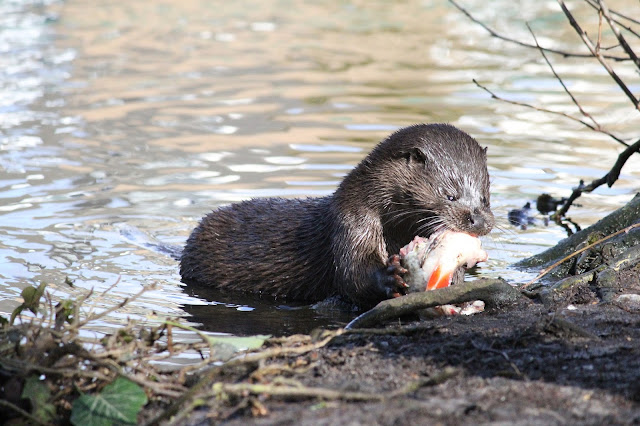 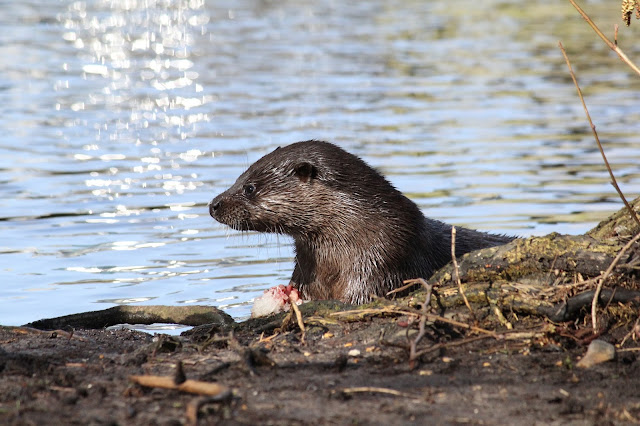 Email ThisBlogThis!Share to TwitterShare to FacebookShare to Pinterest
Labels: Wildlife

A few photos featuring some of the Milk Skateboards crew and friends taken on a recent filming mission in Harlow, Essex. 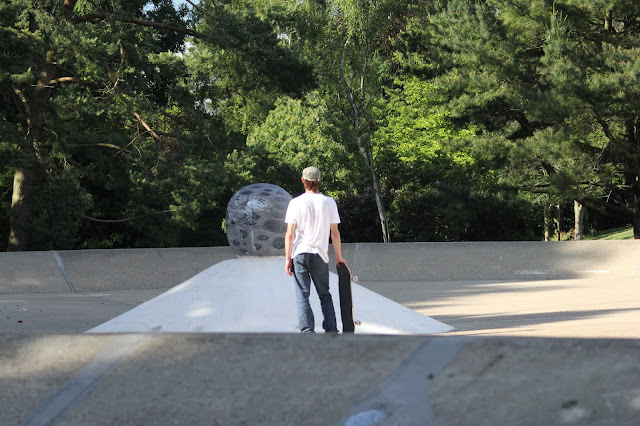 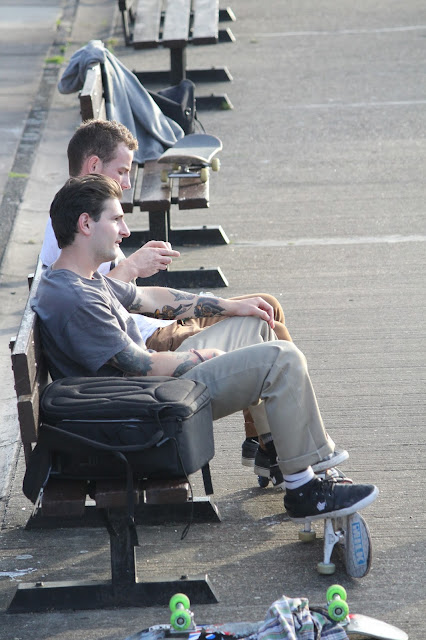 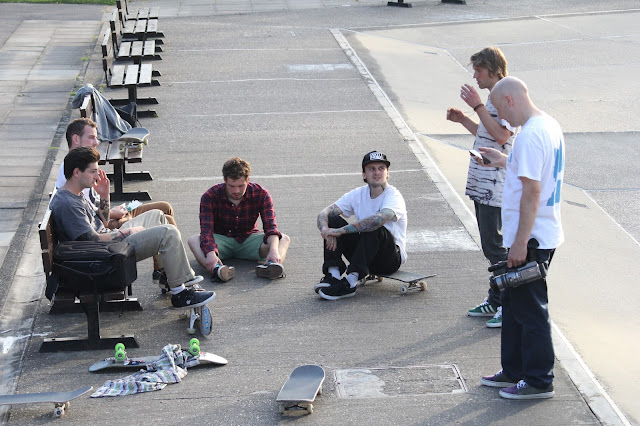 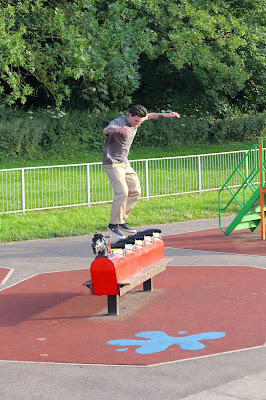 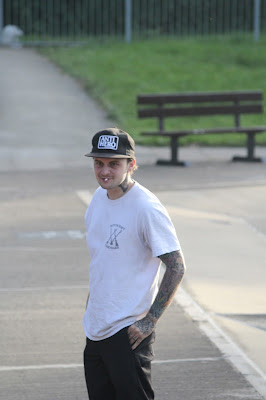