I haven't been to a skate park birthday party for years. It was great fun! I learnt something new, I tried to teach a reluctant Zak some f/s tricks and took some rad photos of the birthday boy and others. Mates, skates & 'soups. Just what Harry wanted. 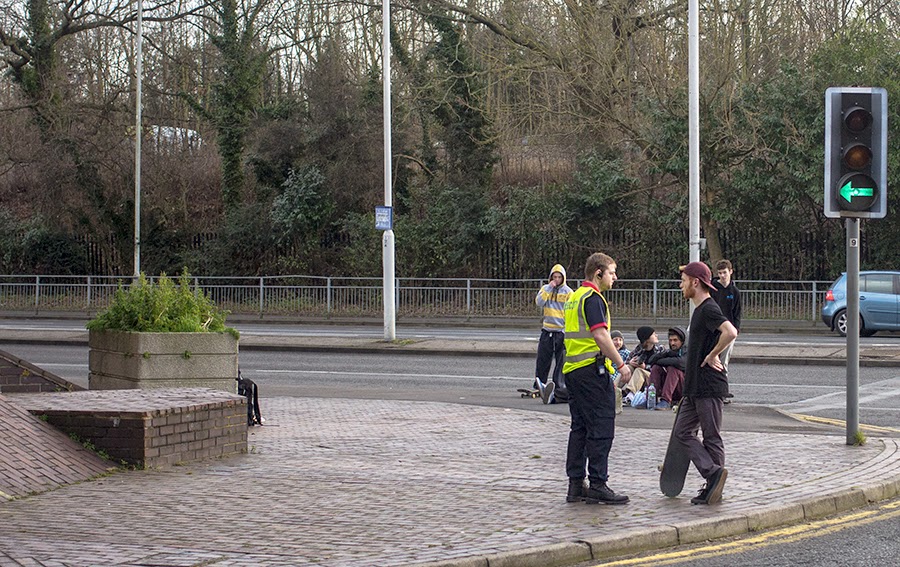 A large group descended on Basildon to clear up some previously unfinished business a few weeks back. We arrived to find a good group from Empire Skatepark languishing in the sunshine of early February in the concrete wastelands surrounding the Eastgate Centre.


Plans were to revisit a couple of spots to catch the elusive tricks from the last mission back in February '14.

First spot of the day was to be the banks outside the car park exit of Eastgate Shopping centre. Not the easiest thing to skate, although round the corner there's a nice bank to wall that didn't have a run out into a constant stream of exiting Sunday shopping traffic! Doubtless to say, after a while a security boy arrived in his high-viz and walkie talkie and asked us politely to move on. Charlie managed to get a couple of goes in as others distracted the guard. We promptly moved up the road to the next stop.

As we skated, Charlie skidded to a halt next to a round, low brick construction outside the gates of a office block redevelopment. The circle turned out to be filled with a smooth wooden base.
The group paused on the low wall on one side of the gates and as Charlie warmed up, a security guard with a BIG German Shepherd exited the small porta-cabin by the gate and proceeded to walk up and down the fence shooting stern glares at the group pausing to chat to the builders. I'm not sure if he was in fact glaring or if the fella just had that sort of face. A big angry face.
An ollie in to manual across the wood to a kickflip out was achieved after a short time and we left the man to his face. 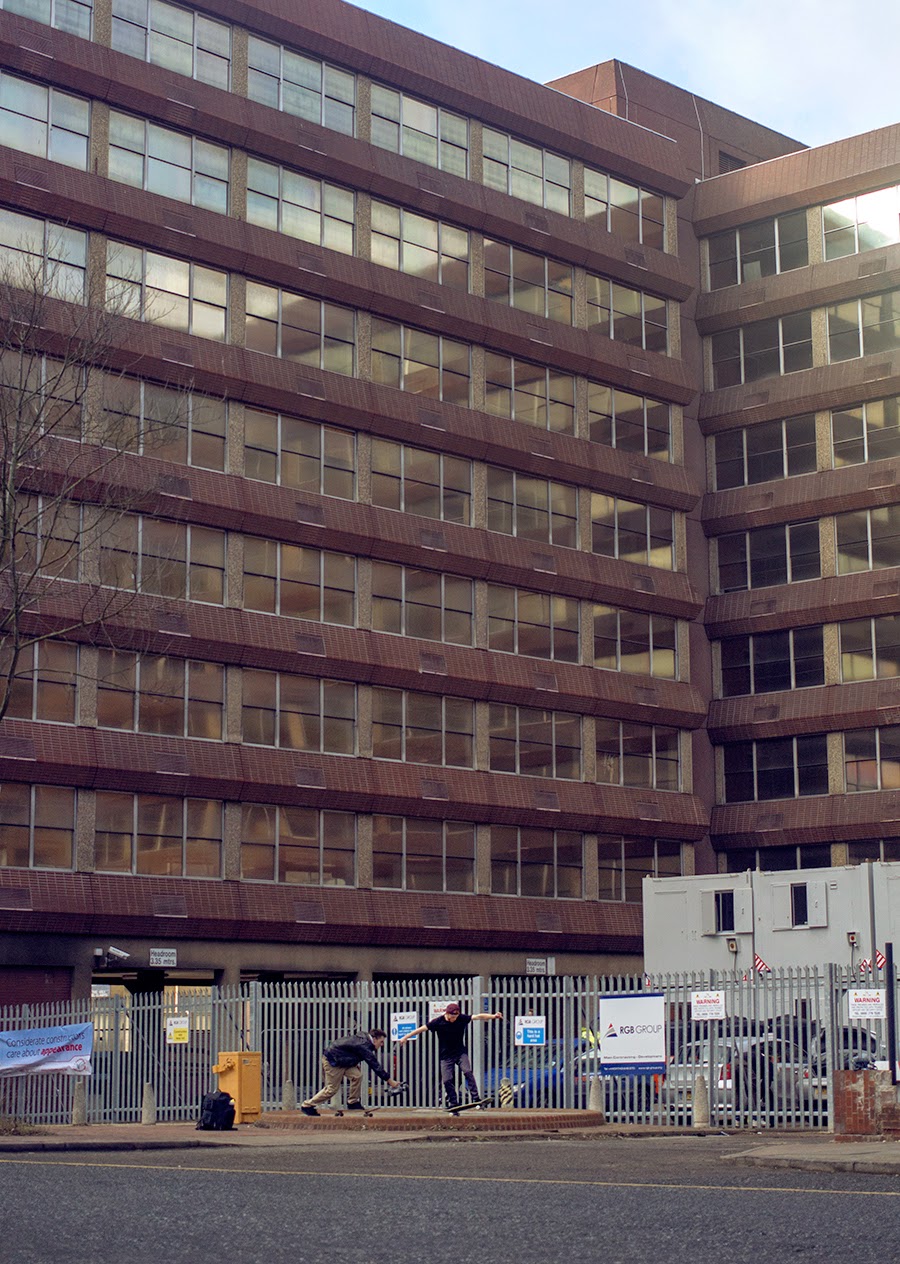 We found two from the bottle red wine drinkers at the next spot. They were happily glugging away wrapped in thick coats as Remon, Harley, Charlie and Carl got to grips with the hubba one side of the steps. Positioning myself on the central reservation of the dual carriage way adjacent to the spot I was soon joined by Luke with the VX.
Within a few minutes, the same boy in florescent yellow bowled up the pavement with his authority and asked us to move on informing us that he'd be back if we skated anywhere along this street. As he spoke, Remon rolled away from a board slide. To the protests of the two winos we all rattled off to the steps at the back of Argos, well away from Security Boy's patrol.
These steps had alluded a couple in the group on our last visit. This meant that the whole group were vocally behind each attempt and after a few bails, both rolled away with happy endings.


A short skate back to the cars and after negotiating our way out of the mobile soup kitchen that had sprung up in the car park, with volunteers feeding the homeless & needy of Basildon, Harry guided us to one of Paul Carroll's DIY creations by Tesco Extra on the A13/A132 interchange.  A small bank to ledge right by the main road. It was dark by now and the guys skated the ledge lit by three LED camera lights for a while until Nate returned with a KFC. We hadn't noticed him leave in the first place, he just appeared with a small box of chicken.
Once his box of delights was noticed by the group the want to eat quickly outweighed the want to skate so, all back to the motors to hit the fast food joints.


This is the second time we've hit Basildon. The first time, it turns out was at almost exactly the same time last year, and somehow we blagged another fine, sunny day. Not sure how that happened! Maybe the sun always shines on Bas Vagas...

In my opinion, Saff Wads' One Minute Park is one of the best lit parks in the UK. I wish my local's lights were as pleasingly bright to skate under!
A Sunday session threw out these beauts a couple of weeks back.

Closing for three days is not something an indoor skatepark takes lightly, especially in the midst of a British winter. But repairs to Empire's floor were necessary and quickly becoming more critical.
This closure was synchronised with the delivery of a large amount of the wood from the lost but not forgotten Zombieland Skatepark and the construction of a new micro mini to replace the very mellow, thin ramp which in my opinion was in many ways a hindrance rather than a help to newcomers to the transition.

Note: I should explain at this point, as some people may be thinking "hang on, that's not news. I  skated the new ramp three weeks ago!", that my MacBook's logic board decided to throw its chips to the gulls a couple of weeks back and I've just received it back from a fortunate free repair, but that's another story.
So this is really the first chance I've had to write this up...

The Zombie Brand boys were deep into sorting struts and marking out templates when I arrived on the second day of closure and large, deep trenches littered the floor of the park and the Empire crew were finishing off preparation of said trenches before filling commenced and Lewis furnished me with a lollypop* within a few minutes  (*Empire Skatepark standard issue construction aid #1). All was looking positive for a straightforward build.
The mezzanine's previous occupant had been taken away by a park customer so a large inviting space roused imaginative thoughts of design.
As I snapped away from a corner I noticed Lewis & Ray were getting ready to tip a bag of cement powder into a bucket. Sure that this was going to result in a dust cloud of some proportion I moved in and sat waiting for the pictures to come forth. I waited ages for the laughter, but none came. Disappointed.
The tentatively power blended concoction was poured into the waiting gullies and levelled and full attention was then paid to the new ramp.
After a two verses one quarter pipe building race and the flat bottom was well on the way, I left them to it. 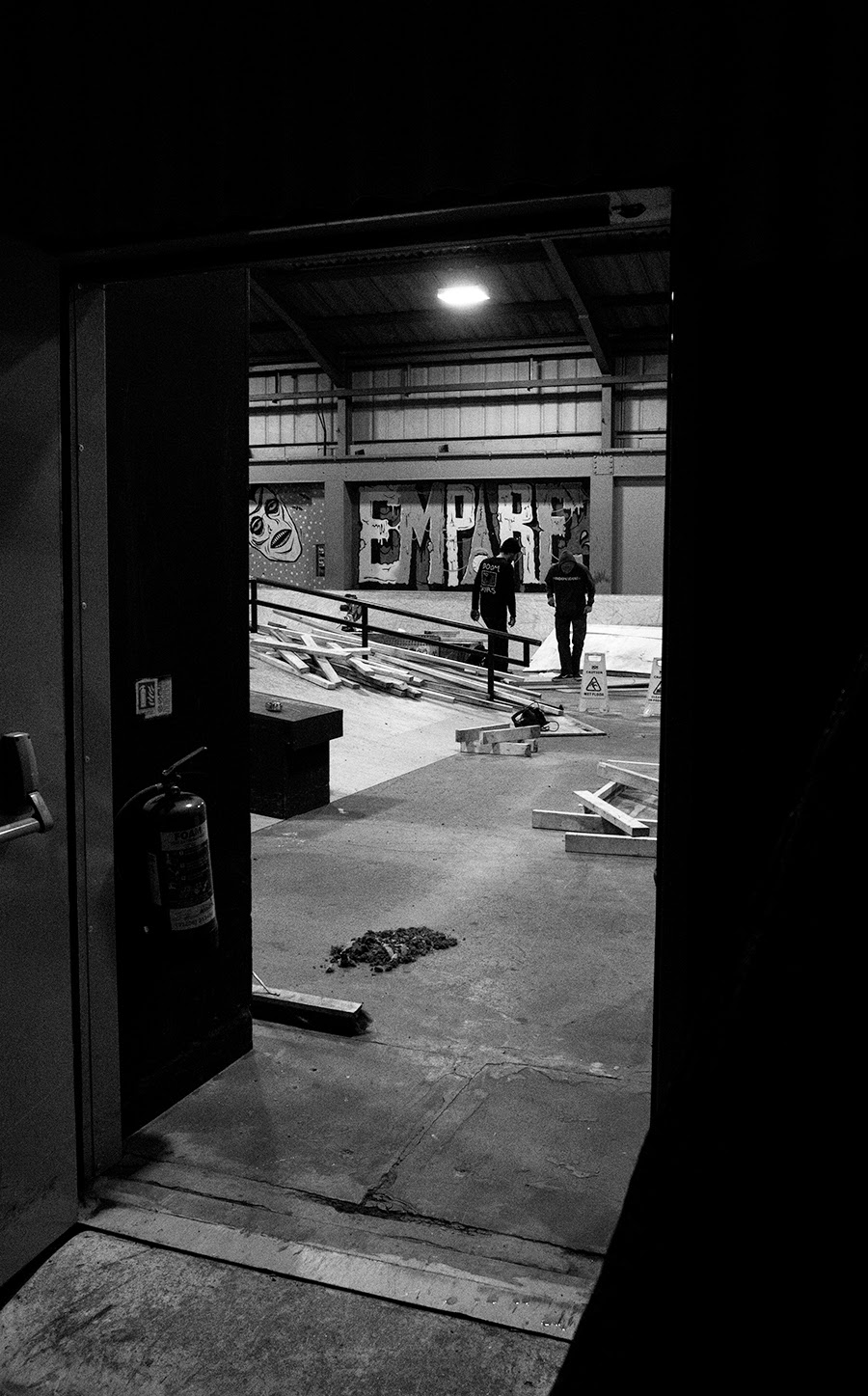 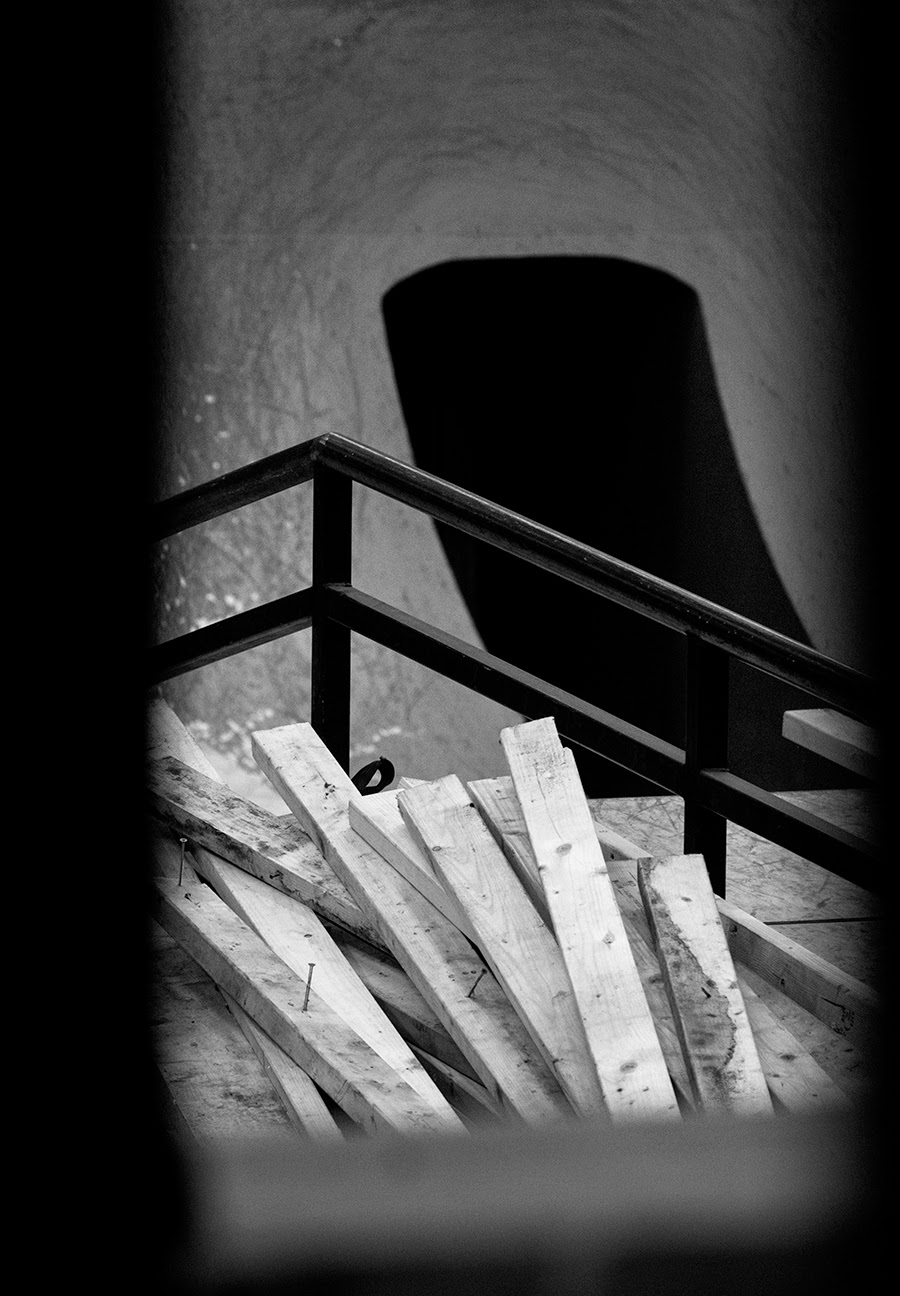 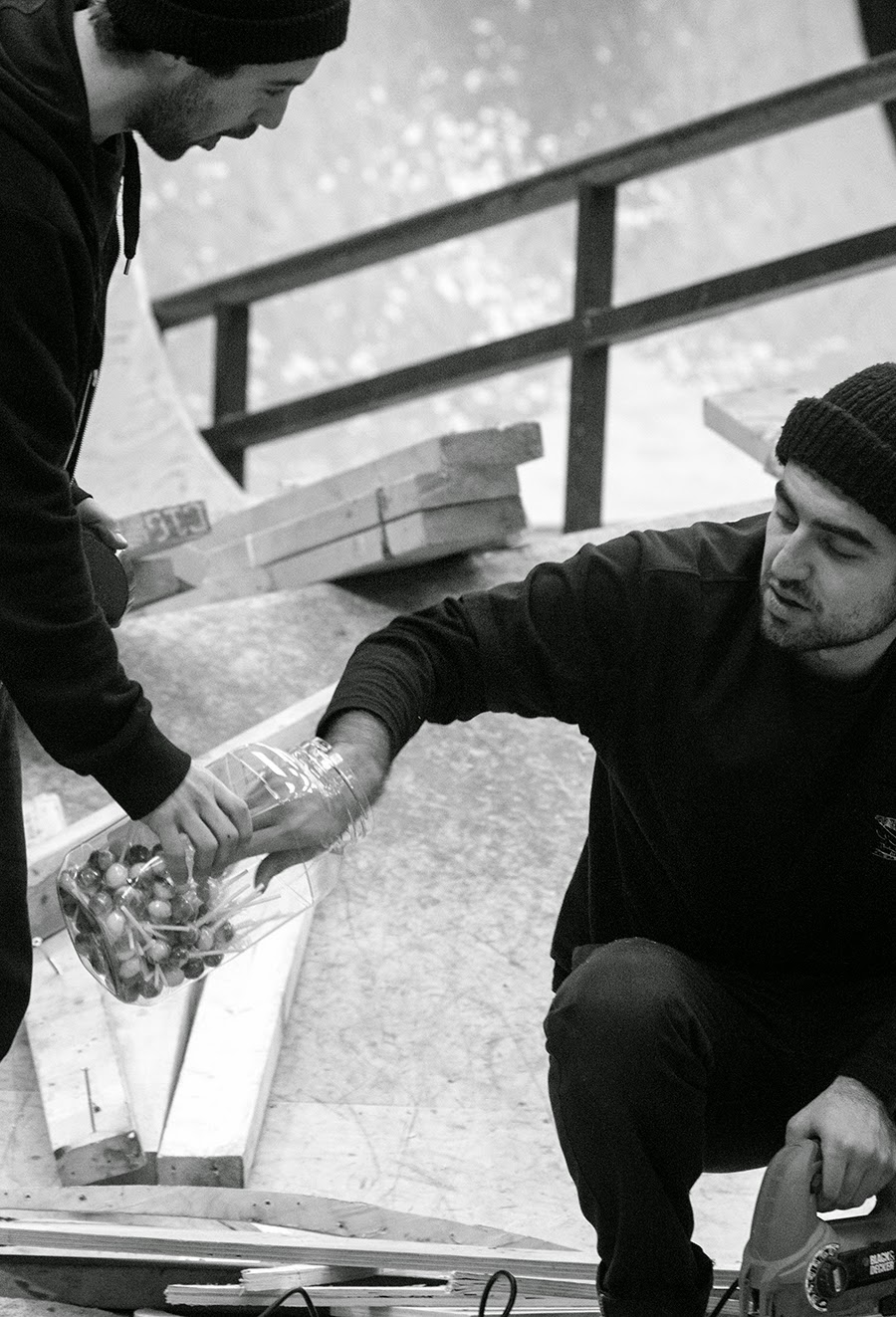 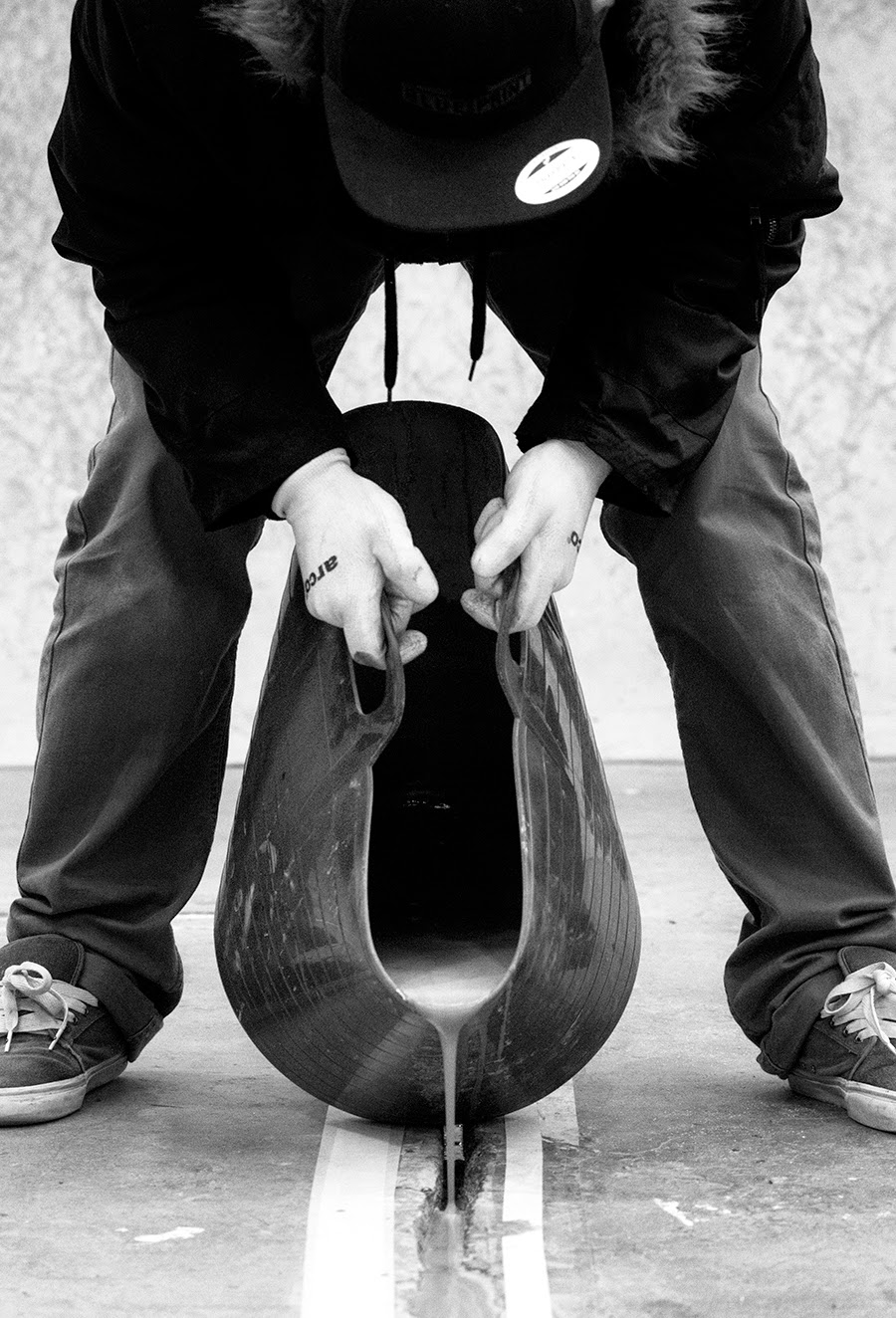 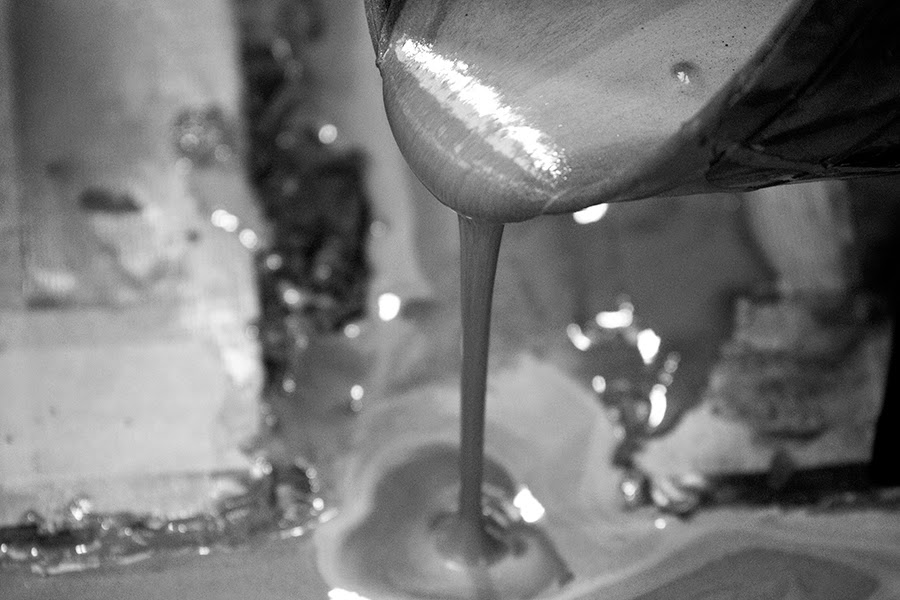 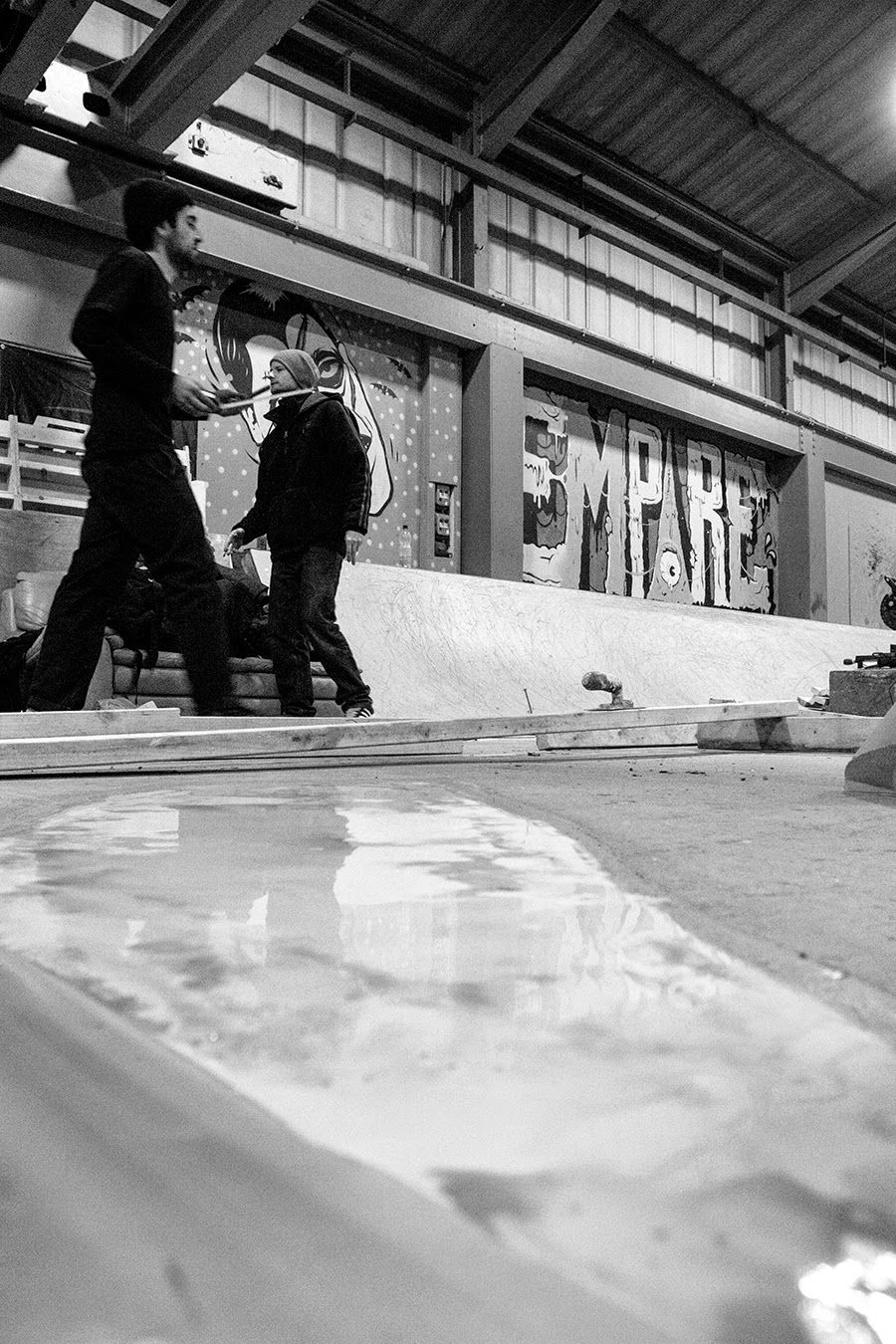 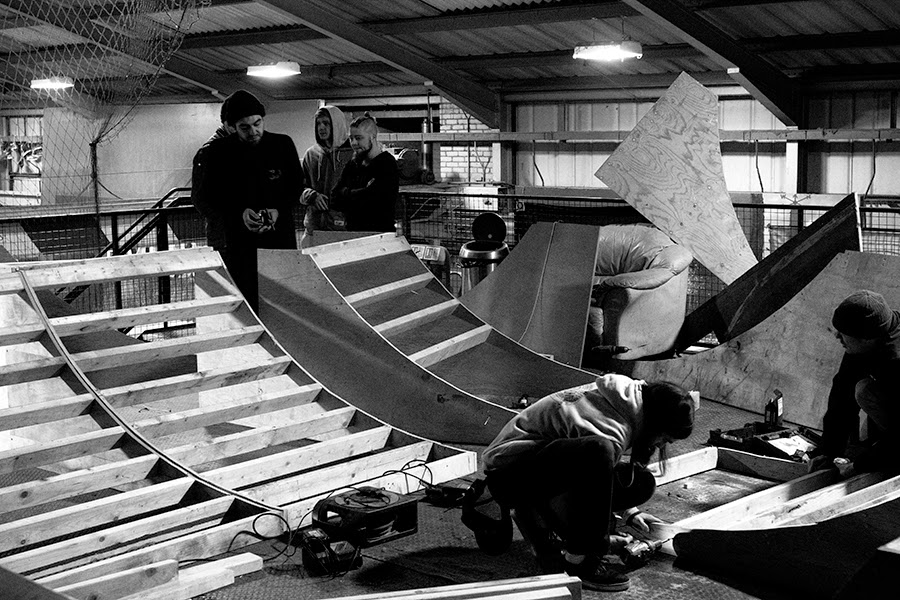 Although the park remained closed for a couple of days to allow the floor to set, Jordan had already got the ramp worked out and spent some time when I next visited, attacking the extension as I sat on the other side of the park. 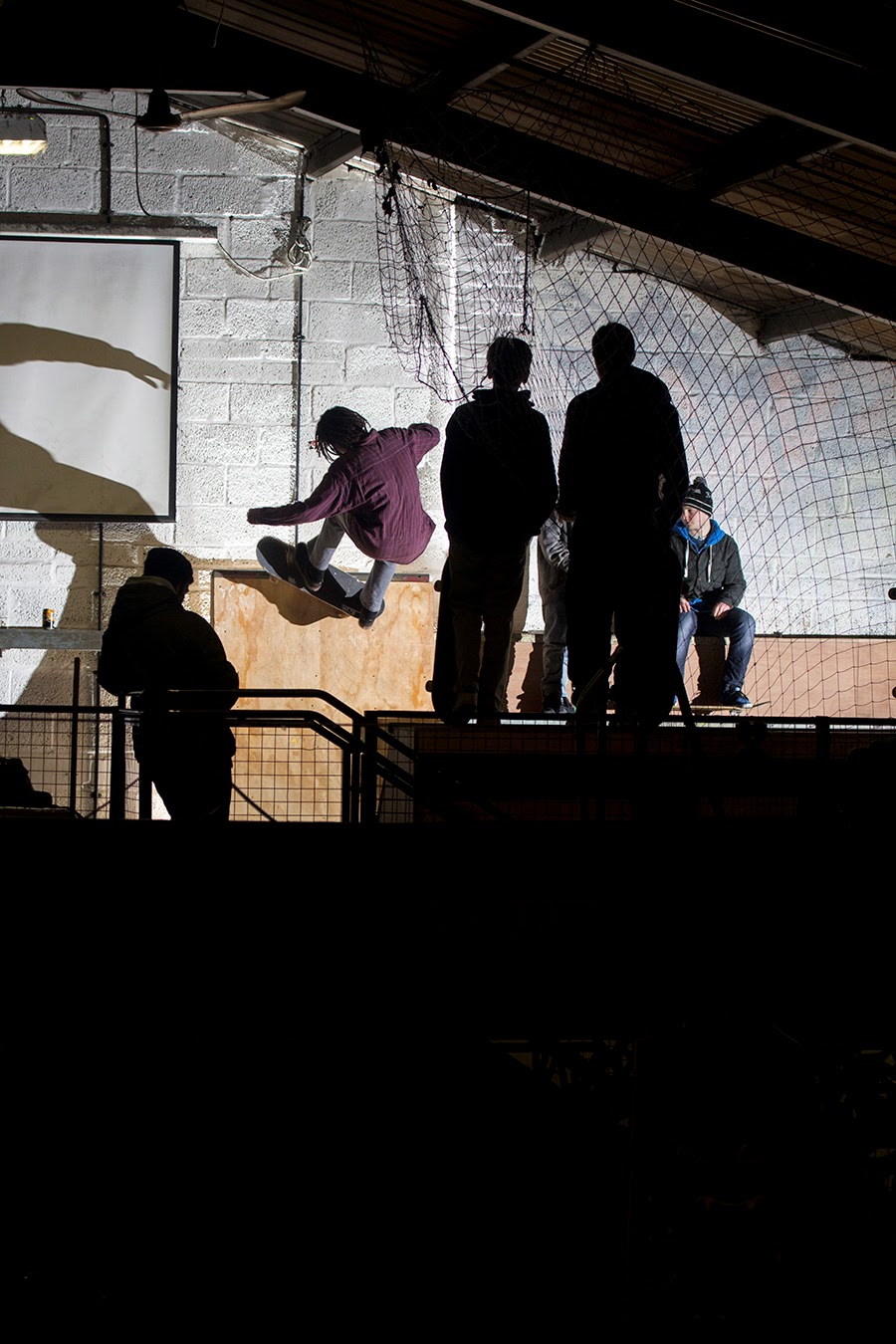