Finally I can show you one of the photos we held back from our trip to Paris earlier this year. The first photo I have had published.
It was used for a Milk Skateboards advert placed in Sidewalk Magazine in the July edition promoting the new Full Fat decks featuring artwork by Rob Mathieson. This is the Hobo.

As I said, this was taken while skating around Paris earlier this year with a few of the Milk crew. These steps were not a planned visit, we skated past them on the way to another spot and Harley just veered right between two shops. As with the rest of Paris, it stank of piss so we were careful to check before placing any bags or lights! I didn't notice the no roller-skates/bikes/mopeds sign on the wall but it kind of adds to the image and the locals that stopped and watched didn't seem to mind.
This was a tight line with a terrible landing surface before having to duck down under the second rail and squeeze between the trees and out into the street. I took two photos from different angles but the lower shot came out best.

So, here's the best quality version of the ad I could get hold of.

And the second angle.

Thanks to Dan at Milk Skateboards for using the photo and Harley for going to work.

So a couple of weeks back I gathered some faces from the local scene and headed for Norwich to meet Dan and the Milk Skateboards crew for filming duties.
The band of degenerates I delivered to the county town of Norfolk are collectively known as the Dirty Boyz. This tight knit crew consists of skaters from Bury St. Edmunds and the surrounding area although Louis Meyers-Bickel a founding member now lives in Austrailia, still getting dirtay in the sun....apparently.
(Dirty Boyz can be found on instagram @therealdirtyboyz) 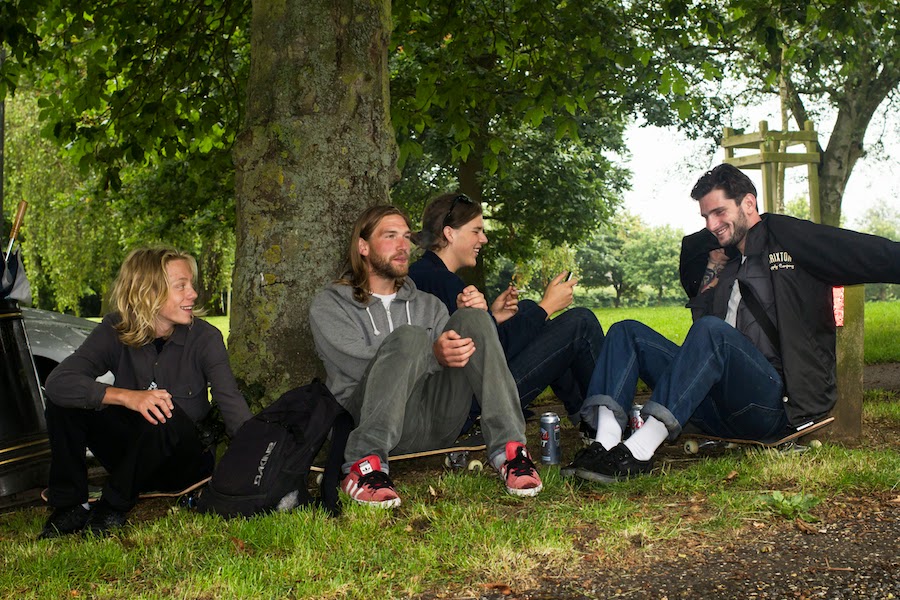 Arriving at Eaton Park in a fine drizzle, we decided to walk and check out a spot at the other end of the park by a model boating lake as Dan & co were still en-route.
Shortly after our return to the car, Dan arrived positive that the rain would pass shortly to leave a dry and sunny late afternoon. He was to be proved correct.
As the first spot of choice came into view - the well known and newly revitalised rail in the corner of the Toys'R'Us car park the realisation that our day was not going to be as straight forward as first hoped hit. A street fair on the adjacent St. Benedict's Street had filled the toy store's car park to the brim leaving the rail surrounded and obstructed.
Quickly moving to the front car park the now three cars full plotted their next move using the local knowledge of skaters living in the city.
Skating to the first stop we found a nest of wet ledges on Exchange Street opposite Cafe Rouge. One sacrificed T-shirt later, the session got off to a tentative start.
I shot from a few positions and the long results are very pleasing. Especially Jasper's b/s tail slide which was taken before I'd had time to set any lights up. 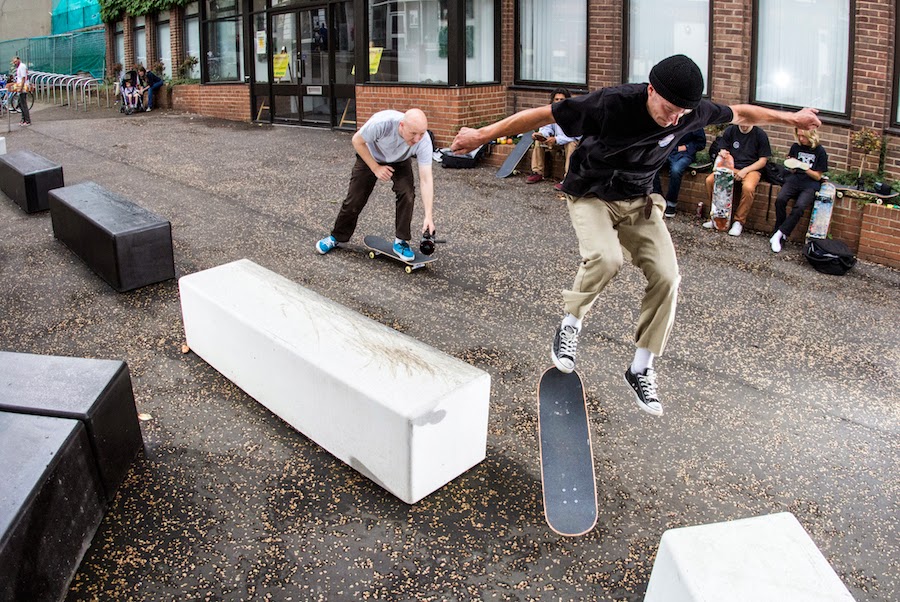 Moved on by PCSO's after half an hour, we chose to skate back to the cars and head to the magistrates courts to skate the red brick bank to wall.
Harley got busy along with Jasper and Charlie with the VX and after a few minute, I noticed Jake Royal frontside flipping on the bank. I told hime it would look great round the tree at the end of the bank and second go avoiding steps and debris, he smashed it! 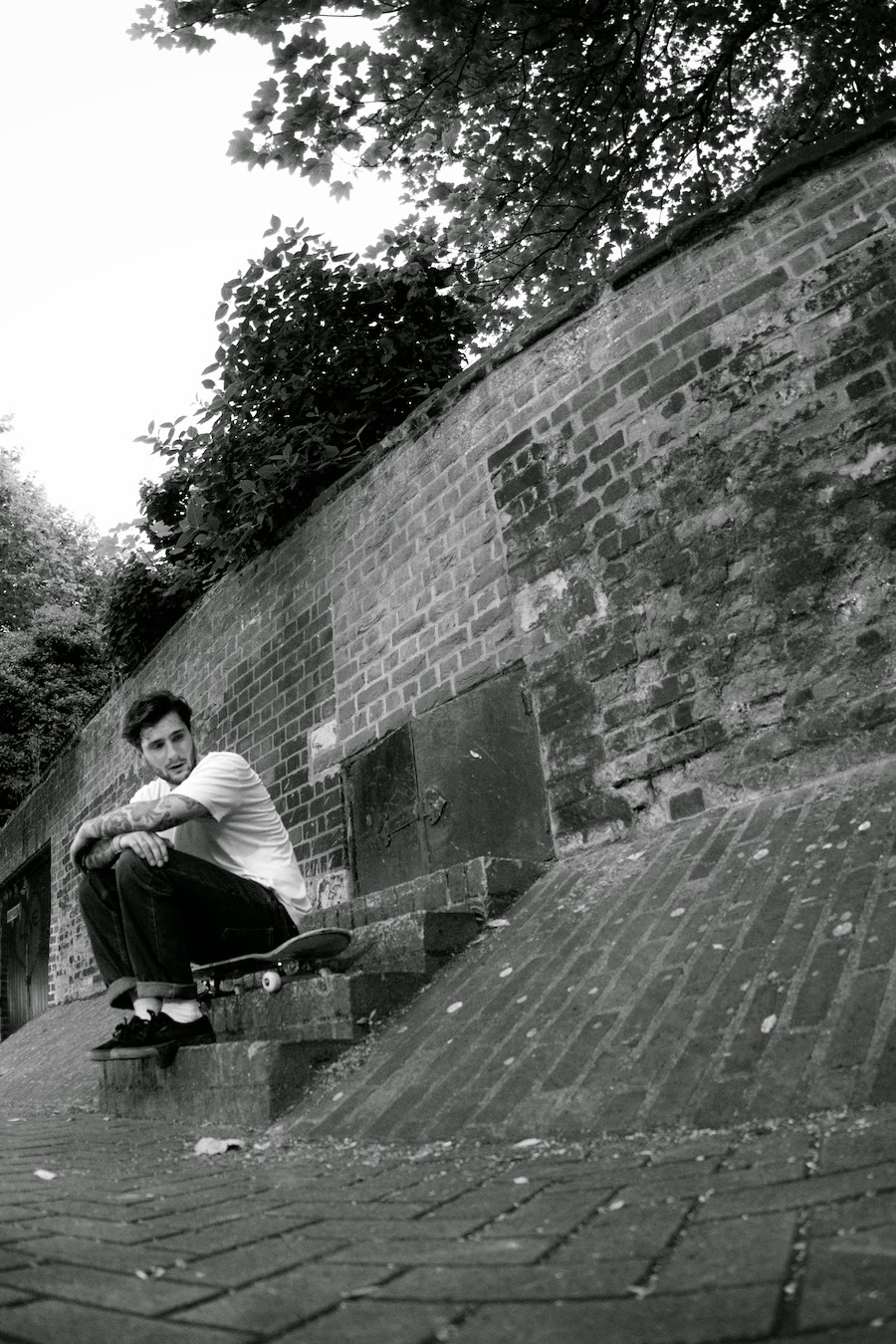 Satisfied with the clips we had in the bag, we headed back to Eaton to skate the spot checked at the start of the day. All model boat related activities had ceased and the club house was deserted apart from another group of skaters who had the same idea as us.
The club house made a nice backdrop for these next few. 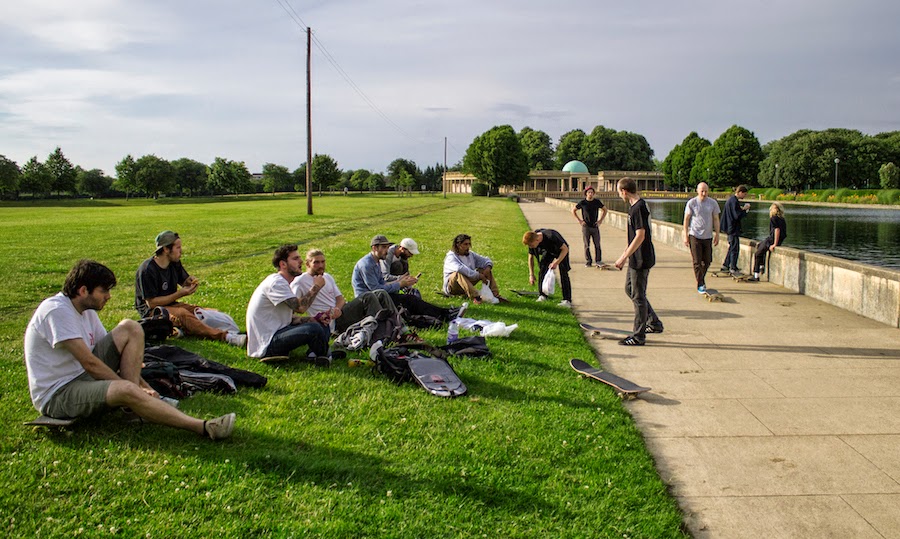 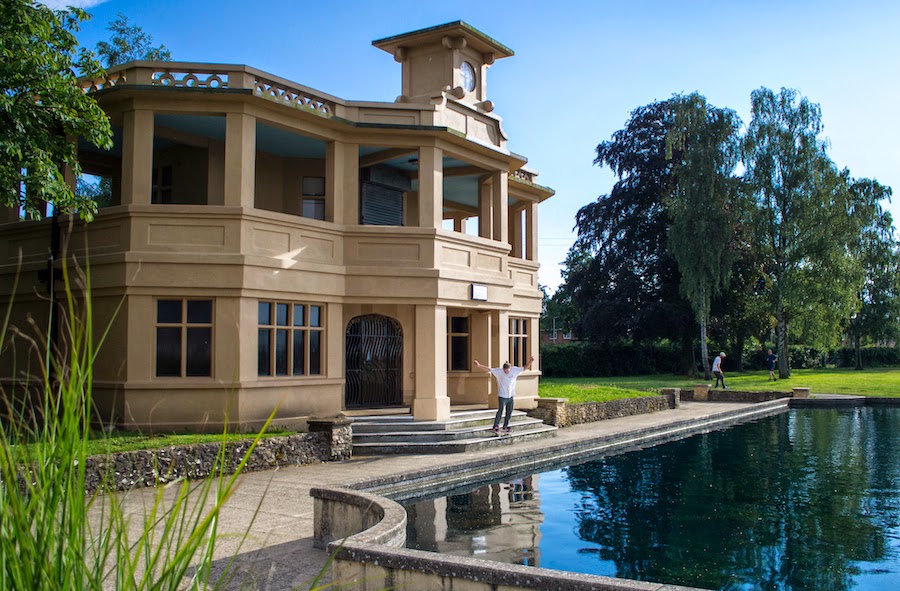 Again, whilst shooting the steps I noticed Matt trying something else and decided to shoot it.


Matt got one or two he was happy with but still managed to get wet by telling me he wanted "one more go.". Never ends well! 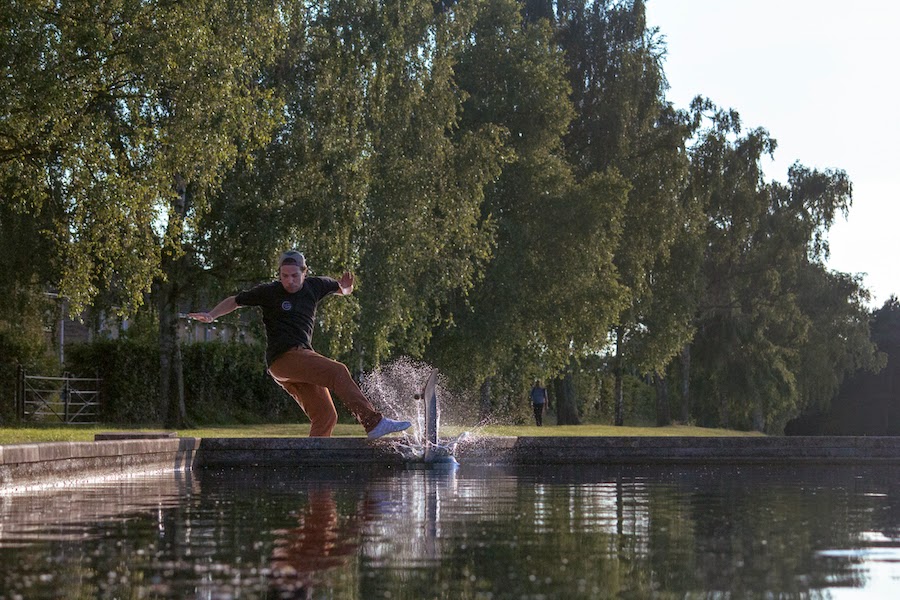 A clear-out of my hard drive has brought to light a few photos I haven't posted for some reason or another.
First, two from Southbank. The UK's most famous and longest standing skate spot.
And it's still as grimy as I remember it being on my first visit over 20 years ago!


This next one was recently used by Milk Skateboards to promote International Go Skateboarding Day on June 21st.

This one of Harley Miller looking all cool I took at an old metal ramp I remember skating in Bishop Stortford as a kid. Even after all the years it's still standing, nestled amongst trees hidden from the later small concrete park.

The next two were taken a couple of weeks back in London. The first right behind the MI6 building on the south bank of the Thames. The second on the steps of Pimlico Tube station. This one was not easy to get due to old ladies and expensive Mercs.

This is another one of Mr. Miller in London. On the steps of the National Crime Agency building near Westminster Bridge.
I had no time to set up or pick a spot so this was taken as soon as the camera came out of the bag.
This has already appeared on Facebook & Instagram but I thought a larger version was worth an airing.

More to come soon, but for now, that's ya lot.