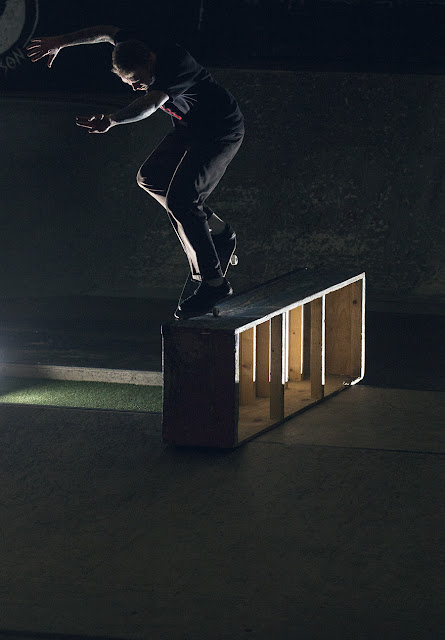 Since my return from Australia in August I have been skating with Jay & Sean of Hardcore Hobbies and John Bird more frequently which I am enjoying a great deal. This has also brought a couple of others back to the concrete wave on frequent occasions through September & October which is always great to see.
As we sidle through late November and onto the new year, the core group, the A Team if you will of John, Jay, Sean & I has now been expanded to include Harley on a more regular basis. And when it's the turn of winter to cast a shadow over our lives, the word Empire is uttered frequently once we've swiped and tapped our way through the next few days on our chosen weather app on any given Tuesday evening.
Although not holding exclusivity, Wednesday nights are skate night. It's been that way for years. After 3 days of trouble and stress, a session down the local with your bros splits the week nicely. Skating past a time which is conducive for a good Thursday morning or just chilling with the boys and chatting shit for a few.


NOTE: That's not to say there is any rule stating that I can only skate on Wednesdays. All other days are still & will always be potential skate days.

The journey to Empire Skatepark is an enjoyable hour give or take 10 minutes, of hilarity.
Jay always sings a song when he and Sean get in the car. Usually about taking crack. And we head out to Rougham to pick up John in high spirits. Although John wasn't playing so this week the excitement began as soon as the crack song began and we hit the A14 at full steam and headed for Copdock and the A12 to take us to the three swords.

The guys at Empire have recently replaced the top ply on the mini ramp which has made it a much more pleasurable skate and this is reflected by the now quite heavy sessions that have gone down on the ramp in the past weeks. This week was no different.
Later in the evening as I stood on the mini ramp platform, waiting for another run and chatting I noticed some guys dragging a large ledge section on to the driveway in the centre of the park and after a few experimental positions decided on placing the box on the flat top, spanning the grass gap. With all the rails removed from the driveway for an event at the weekend the lines were opened up to get the best out of the ledge.
My skate wasn't bad to start with but after annoying myself with something simple I took a break and went and had a closer look.
John, Dave and Jordan were gradually wearing the angle iron down and just kept raising the bar as Harry joined them before banking some instaclips of the others.


Come down and enjoy the friendly and encouraging atmosphere that is Skate Night every Wednesday at Empire Skatepark in Colchester from 7 until 10. 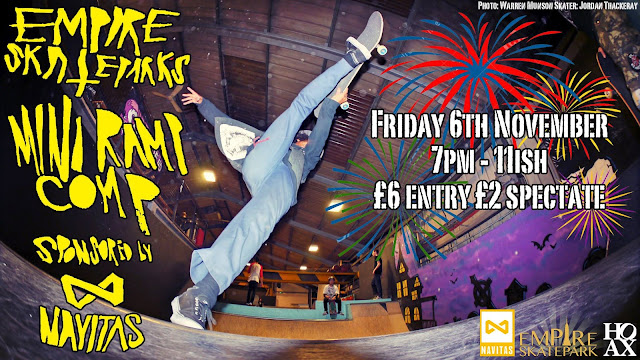 The usual drill - Empire Skatepark, a bunch of eager skaters, Harry Wilson with a megaphone and a box of prizes donated by Navitas Outdoors.
As I arrived, Harry was in a bit of a fluster. He asked me if I had any spare batteries. I had, but only a few AAs. After briefly explaining that the megaphone needed new 'D' batteries and he didn't know if he had time to get them himself I suggested he send someone out for them and instantly he calmed and sent someone out and thirty minutes later, the platforms were jammed and the siren sounded.
Things kicked off with the under sixteens category. 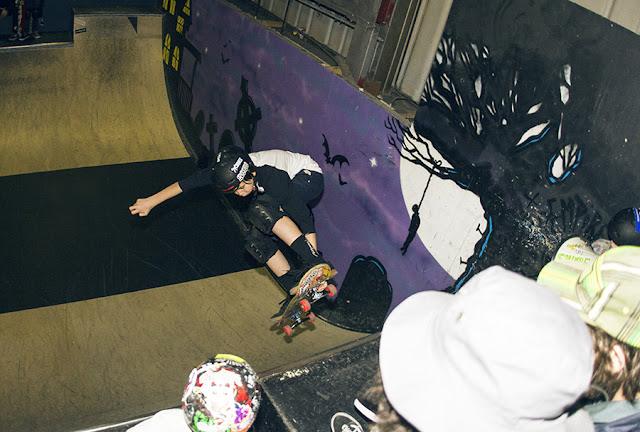 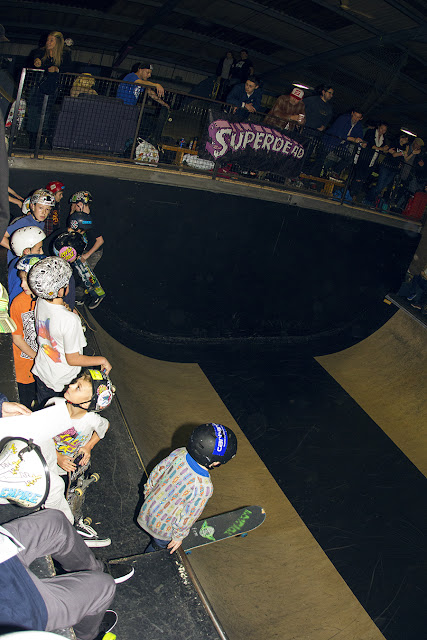 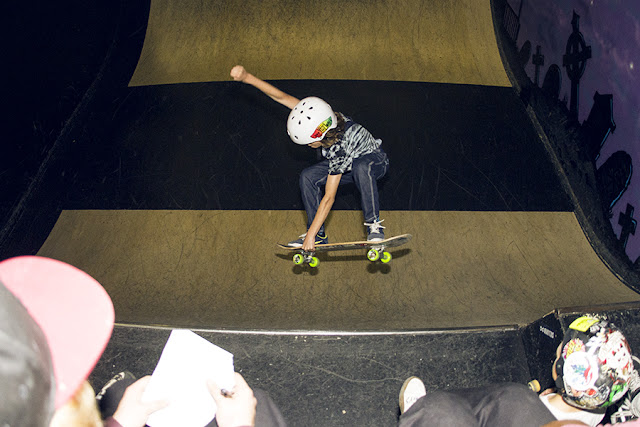 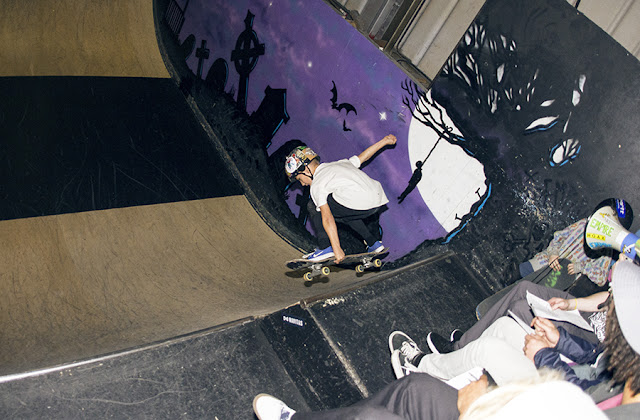 Harry announced that the over sixteen category was "...a free for all. No limit to the number of skaters in the ramp, just get it done!”
And it went off.
We were treated to many collisions and near misses along with an onslaught of lazy cool from local Jordan Thackeray’s satchel of stoke and some balls out skating from the relentless Taylor Jones, and at any time that Taylor wasn’t skating he spent shouting abuse at the top of his voice at anyone skating the mini.
Cries of "Danny Way!", "Smile!" and "Saaaafend! Saaaafend!" were heard by the large crowd gathered on the platform & gallery and were also treated to a colourful range of insults and encouragements that clearly did the job.
Jed Jolly, Justin Baker and Max Melwani pulled some radness out too.
After about an hour, the comp was drawn to a close on the mini. The crowd of spectators soon went home and the 3 sided bar was fitted over the grass gap.
Harry came back with the Navitas box and what hadn’t been given away on the mini was duly gifted to the gifted that stuck around and put the hours in.
The beer flowed freely, Taylor's encouragement grew stronger and the session got loose with revellers gathering on the hubba to watch Harley Miller and Mark Radden make some gnar stuff stick and Toby Gozzett came away with a whole bunch of NBDs over the bar.
Harley & I left for home at around eleven. The party was in full swing and was soon to relocate to a bar in town with the lucky task of entertaining this now quite rowdy gang.

The evening's event had a good turn out and was a welcome change from the banging Halloween fancy dress parties that have become an Empire tradition in recent years. I hope we haven't seen the last of the Halloween events, they really are so much fun. But the odd mini ramp session and in the future, night's held in the DIY bowl complex slowly coming together in the back yard can't hurt the health and growth of an already tight local scene.

Empire Skatepark was the venue once again for the Lords Of The Swords 2015 awards night . The votes had been counted and independently verified and Saturday nights celebrations saw the welcome return of an old favourite, The Shutter Gap!

Work had gone in to this the night before with the construction and decoration of the landing ramp and an extension to give ample speed to clear the barrier out, into the car park.
As usual, rain threatened all afternoon and the clouds gathered as I set up a test shot, but with the luck of the swords, it stayed dry!
Jordan and Mikey began to play and a couple of good pictures were in the bag before the evening got underway!
I left in the early hours of Sunday morning. By this time the skating had given way to partying and as the entire Lords Of The Swords 2015 event had done, the party was going off.