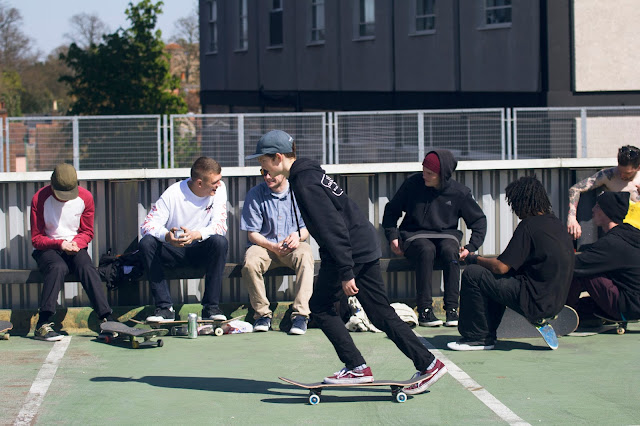 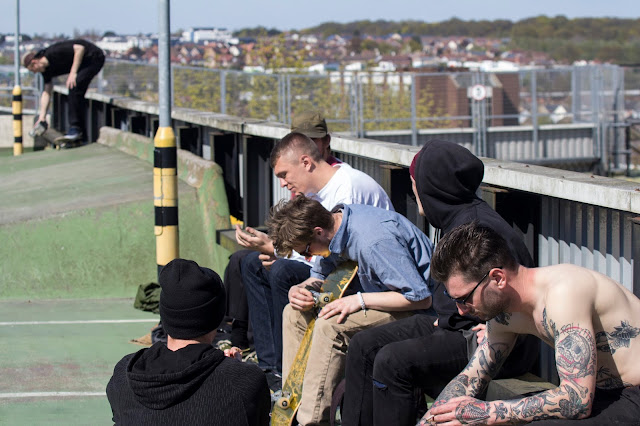 This weekend saw a welcome return of the sun to East Anglia. If only for a day or so.
Knowing Harley was going to Colchester with Charlie to see the Empire/Triple Sword boys on Saturday, I packed the car and headed out to Essex once I'd had a couple of hours at my local on Sunday morning.
I got to the Mulberry Centre to find a group of eight or nine rolling around the arts centre courtyard or sitting on low walls that I knew, quite a number of other skaters were also hanging around in their little groups. A british MACBA in the making!
It turned out that even though I'd arrived at around half past two, this was the first spot. They'd ended up having an hours session there when they met up. This did make finding them a great deal easier. Preferable to driving round a town I don't know that well on a bank holiday. 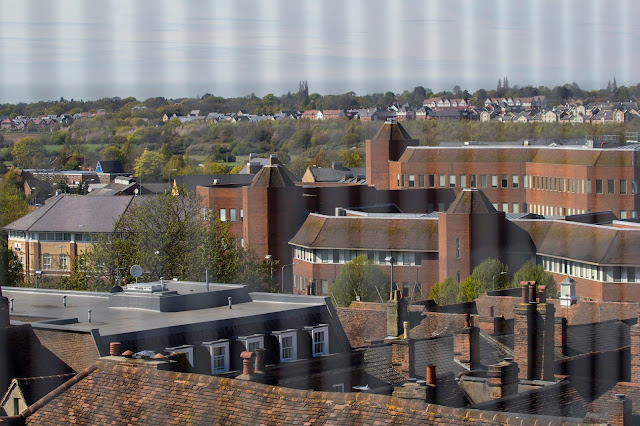 We soon left for a spot located on the top floor of an NCP car park.
We climbed the stairs to the tenth floor to find an almost empty parking level drenched in the late spring afternoon sun.
Some sat as others skated the rise in the floor produced by the raised ceiling over the entry ramp two levels down.
Lots of wallie/mani combos were attempted and a few made, but the focus soon switched to a bar at the far end of the bank. 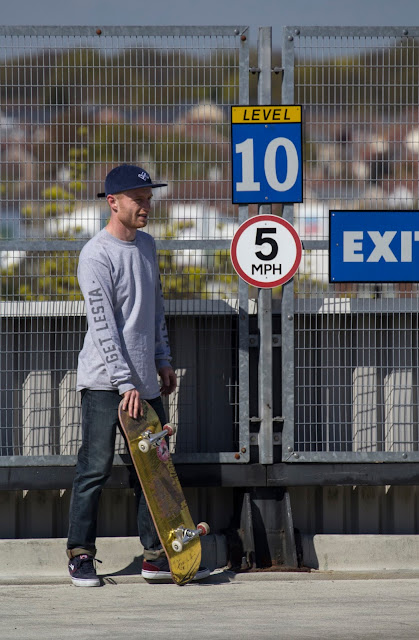 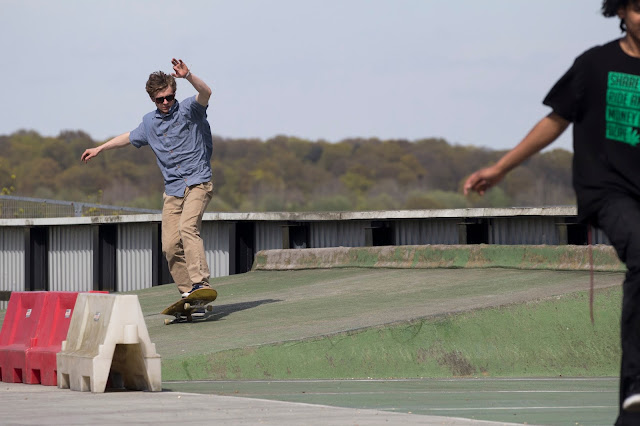 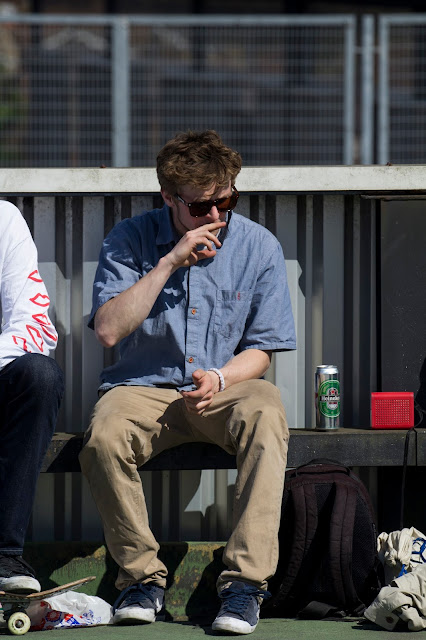 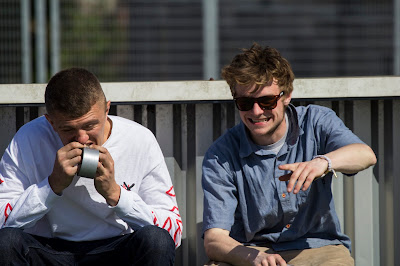 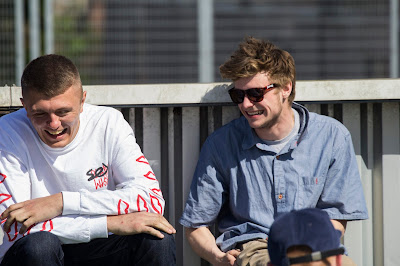 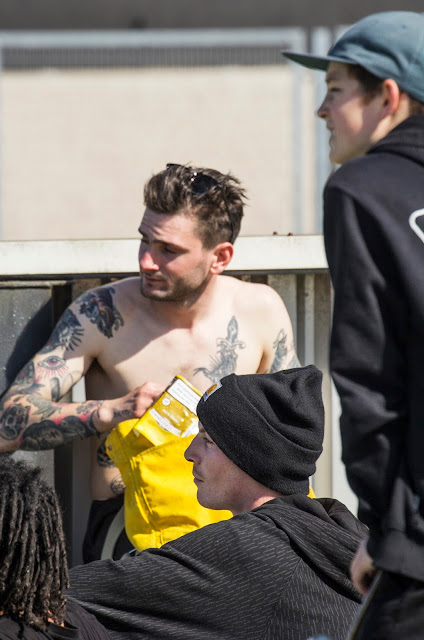 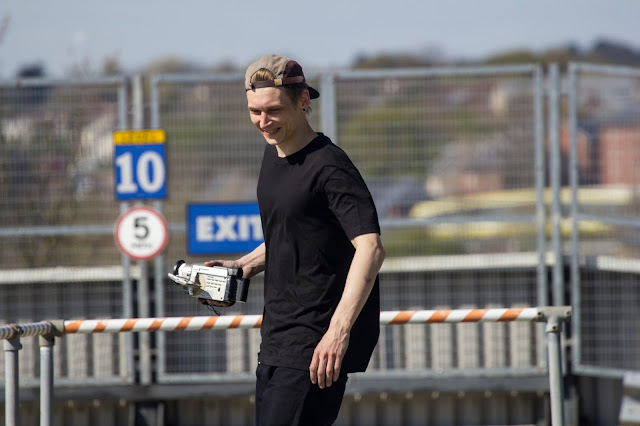 We'd been skating for about an hour before the inevitable NCP patrol van rumbled up the ramp, pulled up next to us and wound his window down.
"Make sure you clear up before you leave lads", and with a smile wound his window up and drove back down the exit ramp. Not what I was expecting at all.
We didn't see them again for about two hours, by which time we'd moved along to one end of the roof, behind the pay station. There we found a set of narrow steps against a wall flanked by a kinked rail. With the added hazards of the opening at the top of the steps being only three feet wide and a gutter in the paving at the top of the steps.
Jordan and Toby went at it and both came away with a couple of tricks over the rail and Thax filmed a line with Radman with a boneless over the rail at the end. This took him the best part of an hour as he couldn't land the 360 flip before the steps.
With a number of slams onto anti-slip paint (that sandy stuff that grips clothes and rips skin) and one to the back down the steps taken, he rolled away clean.

It was easy to imagine on my drive home through the sunny Essex & Suffolk countryside that summer isn't far off, but with the forecast of rain for most of next week potentially forcing us back inside, I found myself wondering if I would be satisfied with the frames I'd gathered on a roof somewhere above Colchester.
And it is May. That means summer really isn't that far off. 4 weeks? And however unpredictable the British summer weather may be, it seems the enthusiasm of some and the completion of a couple of new concrete parks in the area will no doubt make it another to remember. 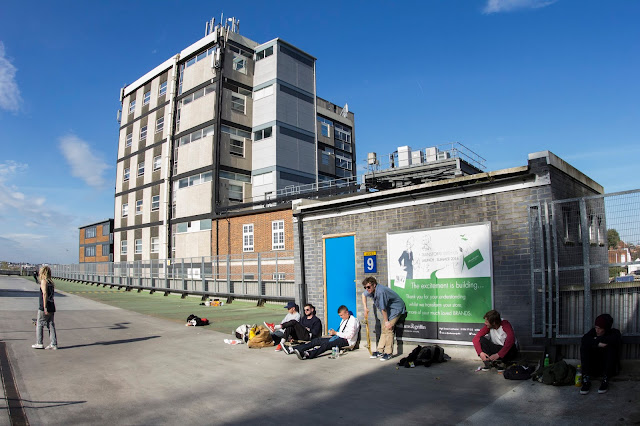