Another dry Sunday and a trip to Basildon, Essex with pretty much the whole Milk Skateboards crew.
After a stop at Empire Skatepark to pick up Jordan and Harry, we arrived on the outskirts of this concrete graveyard via a familiar road from my birthplace of Chelmsford.
We met the Cambridgeshire boys at the first spot, they had already placed some ply up the curb and were finding the best lines in.
I shot this first one (and others that will be posted at a later date) with just a top mounted flash, I don't do this much but the result was quite pleasing!


Just round the corner there were some brick banks with a hip Sam & Harry had been to previously so while most of the crew tried to negotiate the brick hip running out into a busy multi-storey car park exit road, I shot this with Jasper round the corner.

With Harry's good guidance we arrived at the next spot quickly and just as fast Charlie & Justin started attacking the same line: down a set of 5, round a tight right turn and down an 8 set. Jasper and Jordan got their carve on and rode the wall beside the 5. 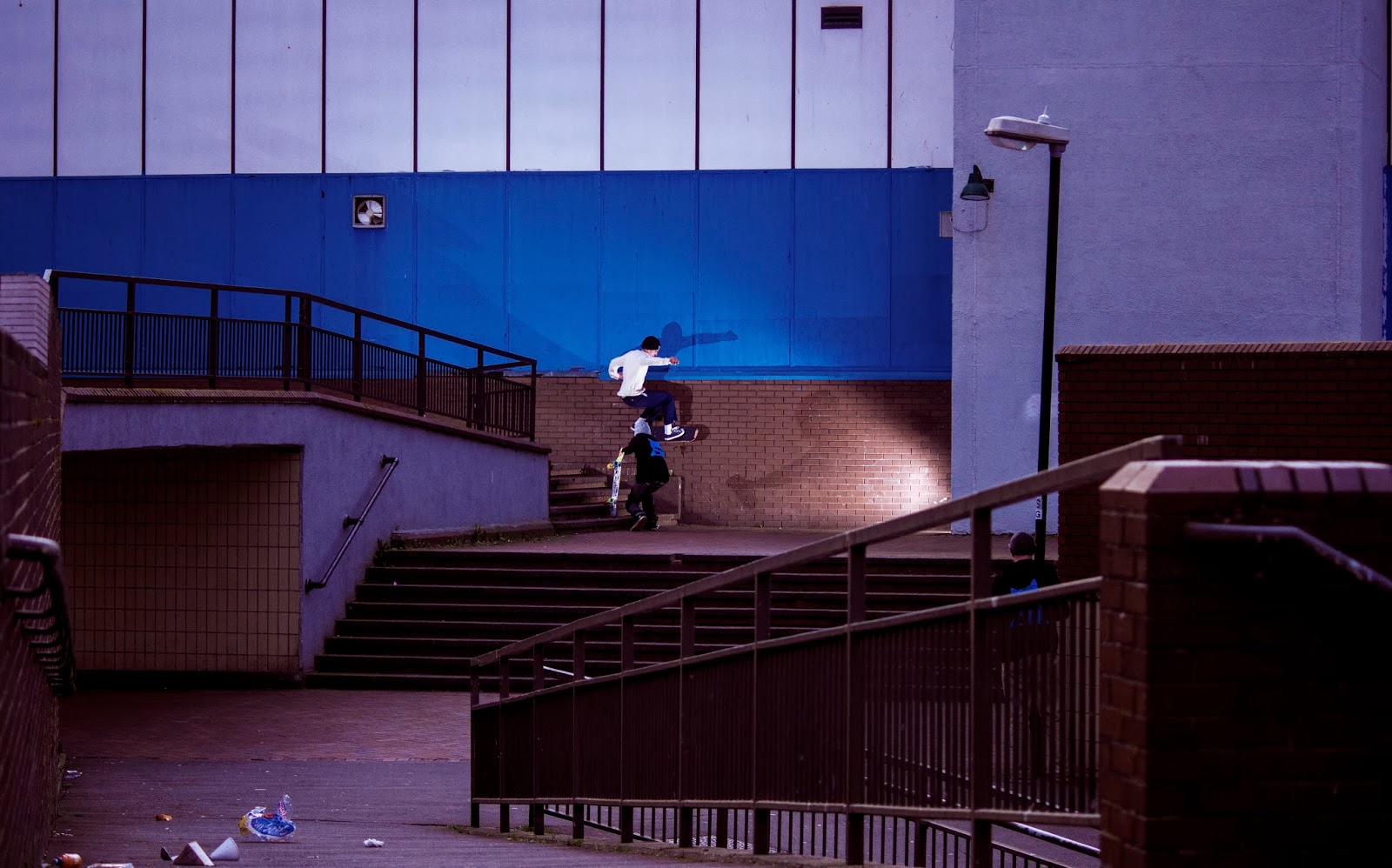 As I mentioned, there are other photos that I haven't included here. They will be posted at a later date.

After a snapped board for Justin, we headed back to the car using a different route which took us past a giant set of 15 with a more modest yet long set of 10 with a fat wooden handrail. Stopping to scope it out we moved on quickly for food & unbroken boards.
A small group returned to said spot and as darkness fell, Nathen lined up for the handrail.
After only a couple of warm-ups and a masterful piece of board control to miss one of my light stands he got what is below on tape.


I heard talk of return for both more on this, and the set behind.
Breath held...

Some reasons why you should be there, if you need them...

To my surprise on Friday, I noticed the weatherperson on the goggle box was forecasting a bright and settled Sunday. An outdoor skate, in February? Not something to be turned down lightly and after the attempted skate on Friday turning into an abomination with awful traffic due to a bit more water falling on us...
Starting with the usual breakfast appointment at Krazy Horse Customs, Harley & I met the rest of the crew at a service station on the A14, collected Charles and got on the way to Leyton.
Harley & Sam had skated a spot outside the tube station and found a load of spots around what is now called the East Village area surrounding the London 2012 Olympic village last week (Stratford, basically). So this week, we visited on mass.
Getting to the spot was easy for some and a little more challenging for others. Parking was easy for all. And after greeting Dan's car full we headed out into the streets of North London.
Skating the streets between spots was something I used to enjoy nearly as much as skating the spots themselves, but with a camera bag each, Dan & I both find it a challenge and have both taken heavy slams when carrying cameras recently. But it is still fun to weave and carve the pavements and streets with a large group. I suppose it must be a little intimidating as a pedestrian to be faced with eight or nine adult skaters hacking confidently towards you, popping up & down curbs and shouting between themselves over the noise of 30 odd urethane cylinders rolling on paving slabs with seemingly no intention of avoiding other road users.
We took a look at the station spot, which was very busy with shoppers and decided to move on and return with warmer legs.
Moving down towards East Village we stopped at a new play area under construction to skate the repetitive concrete waves at one end. It was covered in broken glass and we were busted in 10 minutes. Onward.
The Wallie Spot was next. Jasper put down a banging line on tape before being given the usual excuses by two security guards. At this point, Sam, Radman and Leo Sharp joined us. We headed back to the tube station to skate the rail/bank in the last of the natural light. While Leo shot Radman, I took the opportunity to get a pic of Sam further down the spot, well out of shot and Harley got a gnarly trick on tape. I helped Radman climb on top of a covered bike rack to get the second angle.


We left Leo and skated back down to the wallie spot so I could get a shot of Fuller.


From the moment we arrived we were hassled by the same two security elfs constantly, so as I got my photo and Dan filmed Harley, the others distracted them with the usual time-old arguments and talk of moving on.
As we did so, Fuller & I discussed the inevitability of being hassled by guards at every turn on this site and indeed, the remaining time at other spots on the olympic site we were accompanied by the same two fellas in hi-vis, threatening that police had been called.
We continued to film for the next hour with no sign of the FEDs and with the tricks in the bank Radman showed us a pavement to road gap back towards Leyton. At last our shadows were gone, replaced by a periodically very busy junction on a pretty blind bend.
With Harley spotting, standing in the middle of the road signalling a good gap in traffic a number of people shouted encouragement from their car windows as they passed and twice, slams resulted in boards shooting under moving cars.
Lighting this spot for photos was not easy and I eventually gave up trying to avoid flashes in frames.
I got some nice long and close shots of Sam before we headed back to the cars. 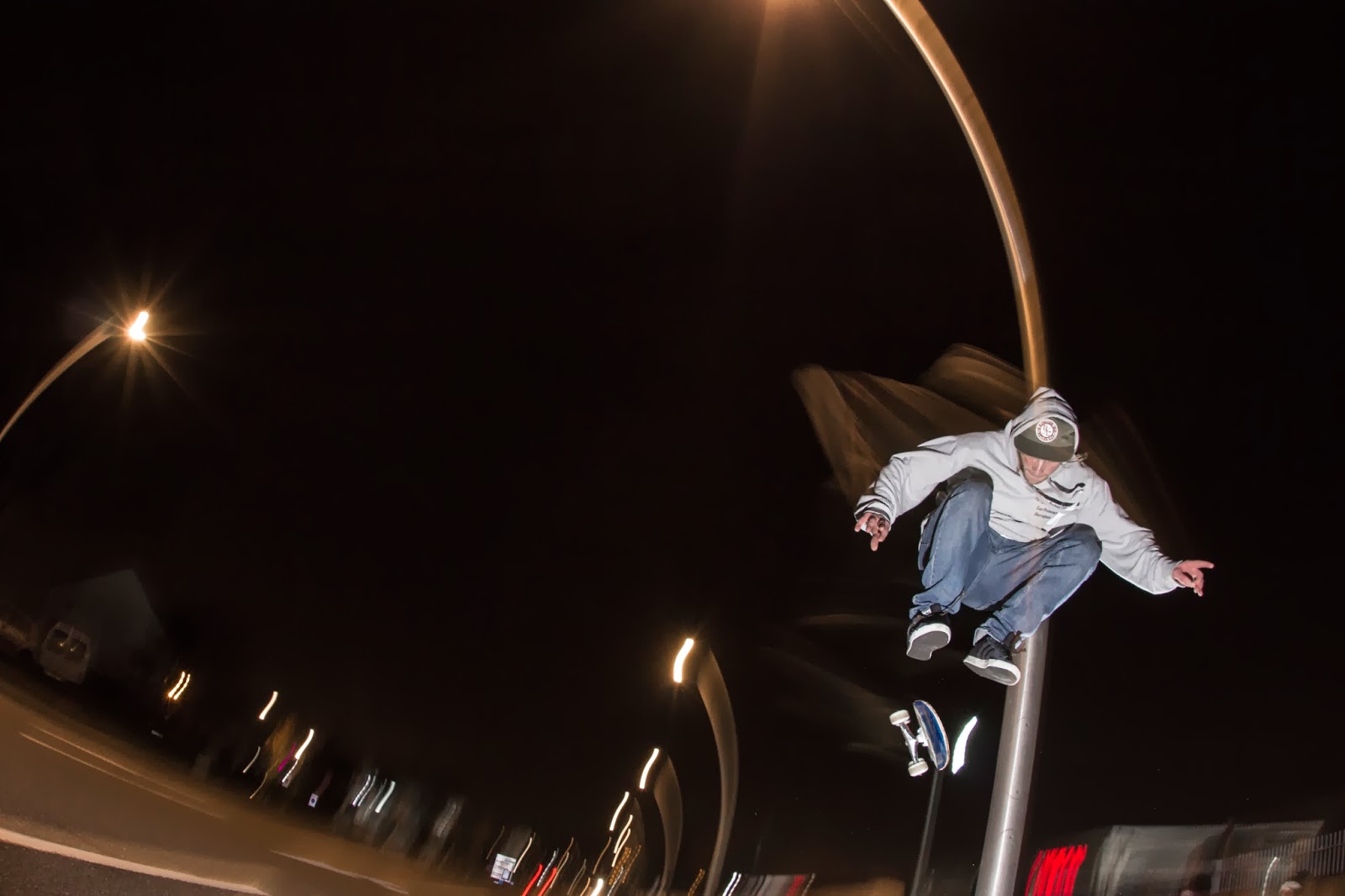 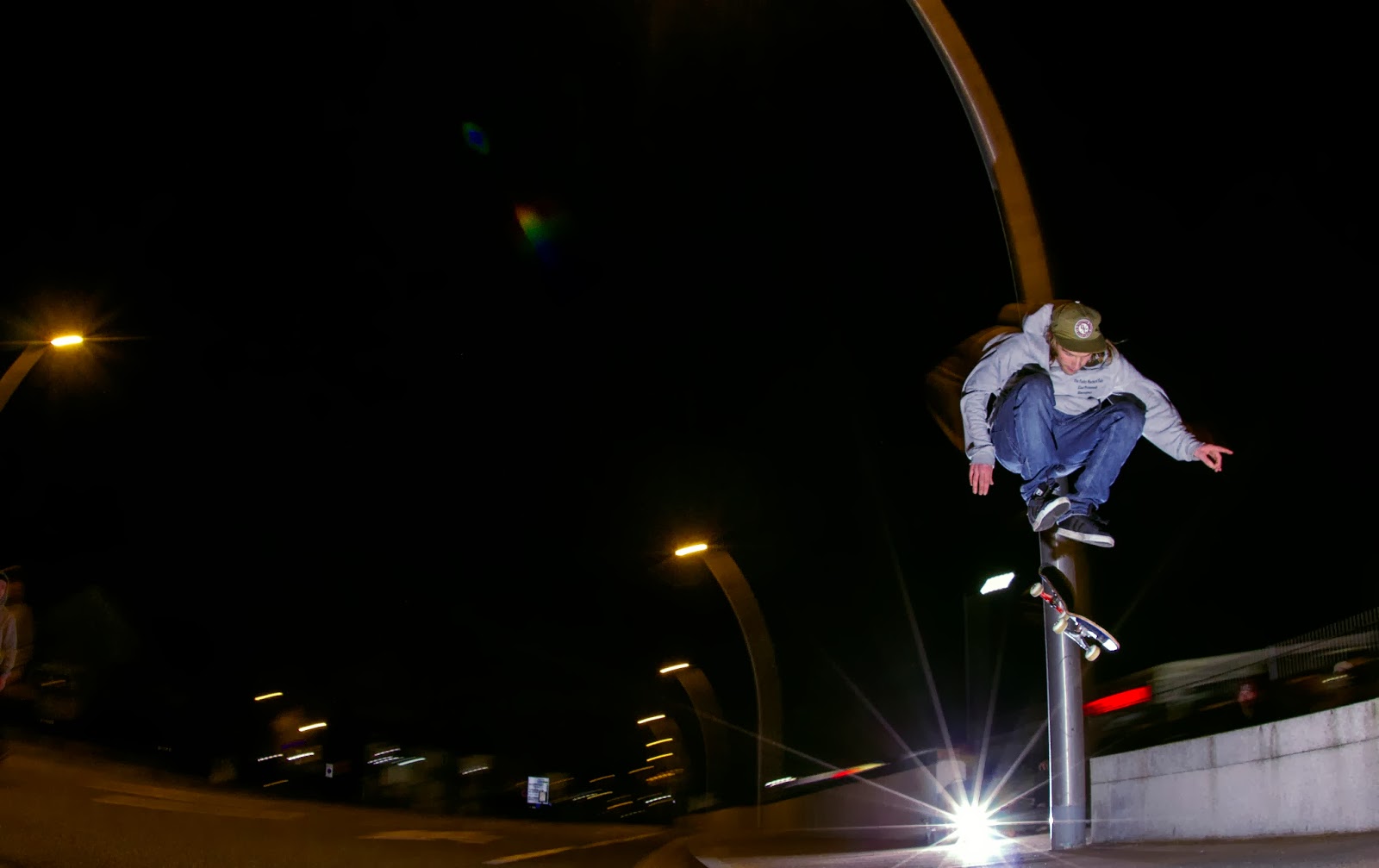