This week saw the release of Empire Skatepark's 2015 edit on to the interweb.

Filmed & edited by Warren Munson comprising of footage taken during events at the park throughout 2015 such as Lords Of The Swords awards night in the summer and the Mini Ramp Jam in November.
Featuring locals including Toby Gozzett, Jordan Thackeray, Mikey Joyce, Mark Radden and Elliot Simmons with a spattering of visitors.
Although I spent a fair amount of last year abroad, I did manage to get to a number of events and have some stills of bits from the edit. Most of these have already been blogged, but I thought I'd ride Warren's wave and push them out again in another guise. Cynical huh.

[Lords Of The Swords Awards Night] 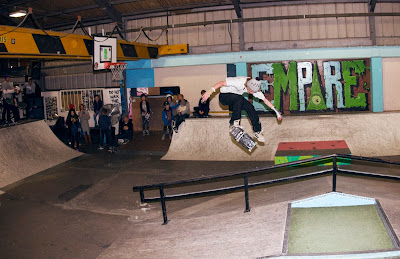 It's an easy concept to grasp. Tricks on any part of the driveway obstacle in the centre of the park get you prizes generously supplied by Triple Sword, Hardcore Hobbies, Stay Hard Dist, Lovenskate, Milk, Moonshine, Hoax and Navitas Outdoors.
Be the best and gain ownership of some scratched up old nineties tech, plus games cartridges and two, yes TWO controllers.
Just being gnarly got you some free clothes & accessories and chocolate eggs so when the comp was started by the usual loudhailer siren the tricks came thick and fast. And with the addition of sugary confectioneries soon became an onslaught difficult to predict with James Grindley, Joe Hinson, John Howlett, Lewis Fitzpatrick, Max Mewani and more going in hard from the off.
I had a number of near misses with Lew as he randomly shot out of the mini, down the big roll in and out of the jump box, over the hubba and landing on the far bank of the driveway. Without my wits my evasive manoeuvres could have put me directly in the path of other skaters on many more occasions than actually came to pass. This said, I did feel at risk of physical interference in more than one instance! 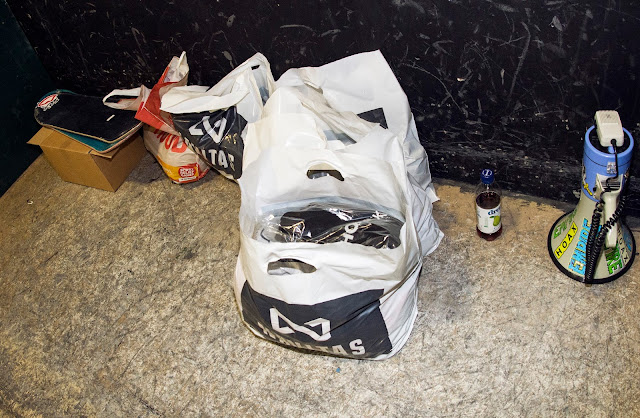 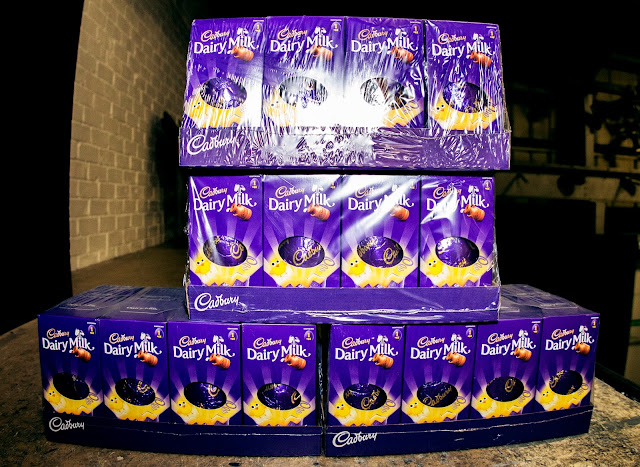 After a long two hours of running about trying to predict everyones movements, the siren sounded once again and the winner was announced.
A beaten up and bandaged Grindley took first, with Joe taking second place.

Not long after this, I began to session the mini. With 10pm cold feet I cautiously warmed up while reminding myself that tentative skating gets you hurt.
Lewis joined me and by the time I realised I was warm, a King of Concrete run came from nowhere and I basked in my own glory on the platform for a sec.
Lewis then hurt himself pretty badly. Handplant on the extension, re-entred and by the time he came to a stop on his back on the flat his foot was pointing in a nauseating and undeniable unnatural direction.
I bolted for my phone and looked up at John on the mezzanine, who was already making his way to the casualty. I hadn't seen him shout instructions to Jack, so I took the stairs down to my bag for my phone. Completely unnecessarily. And by the time I realised, the Empire staff had the situation in hand.
Lewis exited attached to a back board two hours later. The board being more of an aid to getting poor Lew up onto the platform of the mini before passing him down the 5 foot quarter to an area with an easy route to the exit rather than a sign of back injury.
The timing and location of the incident - late Saturday night in Essex made Lew a low priority which frustrated many at the park as they could see he was in great pain and needed help. I think everyone understood the situation all the same and relief was not only felt by Lewis when the first Paramedic arrived with the gas and air! We learned through the usual channels the next morning of a dislocated ankle and fracture requiring screws and plates. Nothing wrong with a few scars.
I hope Lewis makes as fast and full recovery as he is expected to and is back on the four wheeled danger plank very soon.