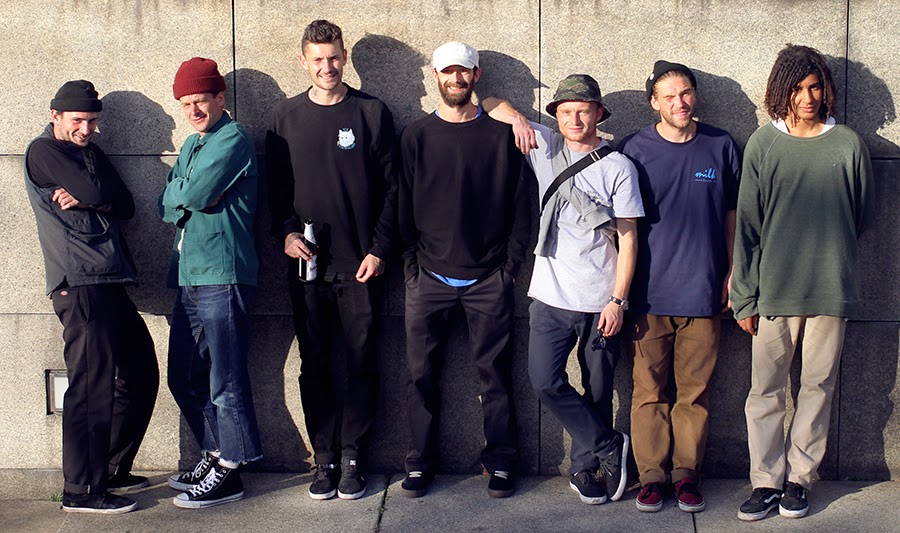 The first words spoken to us on our arrival were from an S-Bahn ticket inspector, two stops out of Berlin Schönefeld airport.


“Ticket?”  [Slight pause as a ticket is handed over]

“I.D.”... “Your ticket hass not been validated ... Passport? … Get off zu train”
Fortunately not all of us surrendered our tickets and passports and as Charlie argued with the inspectors and that goot luck scene from The Great Escape echoing in my mind, the rest of the group ran from the carriage to the nearest machine and quickly punched their tickets. Returning to the platform, the inspectors could do nothing further. One on the spot fine later and with prides dented we were back on our way to our lodgings. The soundtrack to the remaining metro journey spattered with the inevitable SS guard likenesses, bad German accents comments ridiculing the system although, in all fairness we all knew it was our ignorance that cost us €80 within an hour of landing in Germany, even if the cunning inspectors were obviously lying in wait of unsuspecting tourists straight off the plane for an easy number.

Walking the final blocks to our apartment, it became very clear that although well placed for a great number off spots it was not located in the classy end of Berlin. There were frequent large groups of men congregated outside many of the grocery shops staring at passersby menacingly, which made my walk a little uncomfortable. Especially when it dawned on me that the hyped, mainly young crew bowling down the road in high spirits, appeared to be antagonizing them. I may have been completely wrong about the whole thing, but walking around the area at night wasn’t a particularly pleasant experience either. Maybe I’ve been living in the countryside too long.

Passed the 3 floor, 24 hour sex shop and left at the small gathering of hookers we found our fourth floor accommodation; a large four bedroom loft apartment.

Milk Skateboards, a young company from the UK, have been in existence for 3 years now. This seven strong crew; Jordan Thackeray, Charlie Munro, Sam Hayter, Jasper Pegg, Harley Miller, Nicky Howells and Fuller was flanked by two filmers - Luke Petty and Danny Jackson, Swampy and I with stills cameras, company owner Dan Shervington and Paul Storey joined us a couple of days in. By the time beds had been reserved and boards assembled we were all itching to get out and shred Berlin.


The first spot we hit was a fountain outside an aquarium on Budapester Straße. 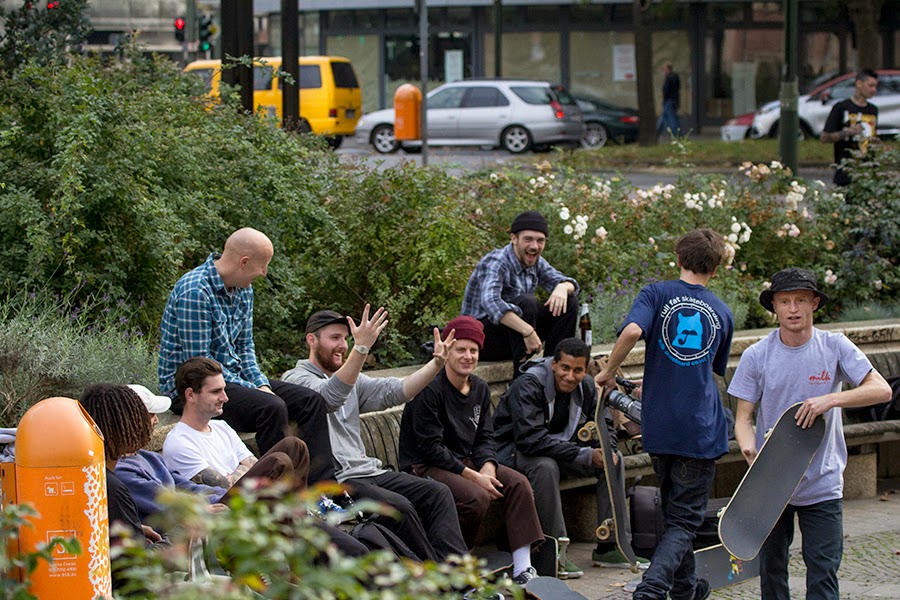 This was the first opportunity for some of us to witness the talents of the newest member of the crew, Nicky. I stood back and shot from a distance taking in the session coming together with Sam, Nicky & Charlie. The weather was good and the beer flowed freely as the lines came together in this busy little square and I was pleased to see passersby pausing to watch. This early experience did not set the precedent for the entire trip but generally the reception from Berliners was good.


We just seemed to bump into some guy at the right time and deals were done. 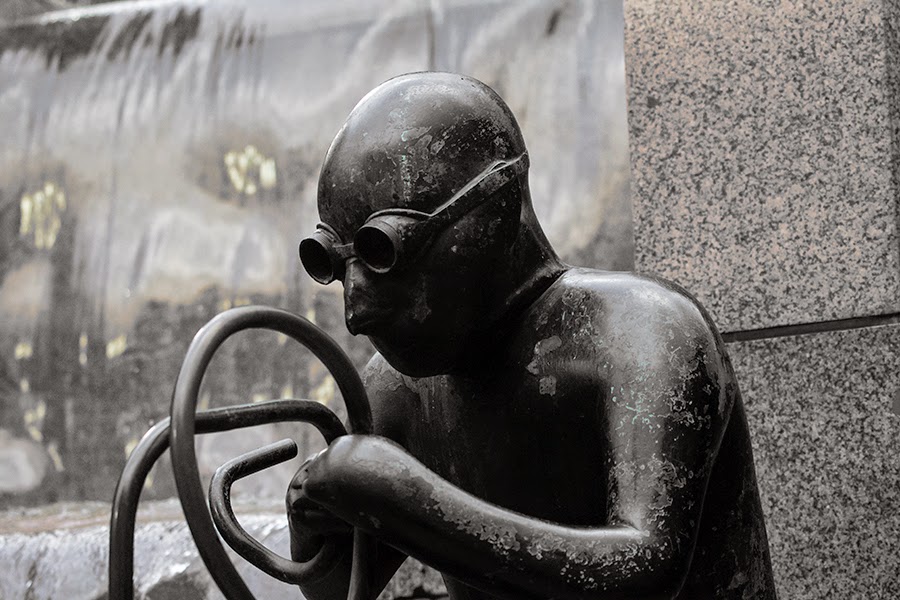 It was at this point that the first acquisition of supplies that cannot cross borders was received. It turns out that anything is available in Berlin. You just have to stumble into the right person. Literally. This is how things turned out all week. We just seemed to bump into some guy at the right time and deals were done. Admittedly, we were staying in what turned out to be the do anything area of the city and supposedly anything was available, at a price. So I shouldn’t really have been surprised. 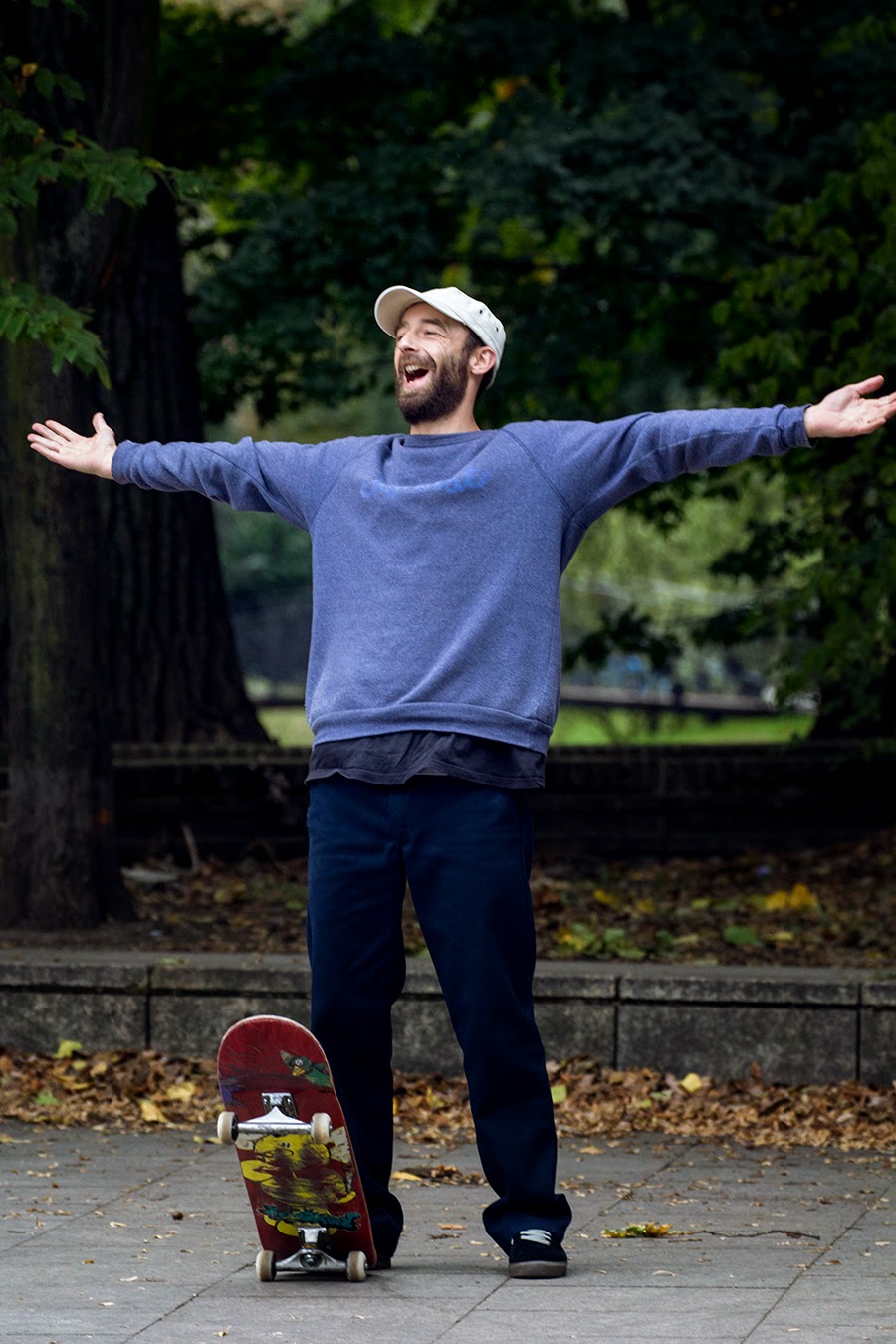 As we skated through the streets we found a big double set curving anticlockwise down and around a fountain with a big kinked hubba dissecting the steps which lead into a largely empty restaurant filled with tables covered in pressed white linen cloths, laid with shiny wine glasses and polished silver cutlery. Flanked by a small absence of smart waiters. Charlie and Harley took the hubba to task and I snuck into the restaurant, placed myself at a table and ordered a drink. I sat and shot from that position as a crowd gathered at the top of the steps, both skaters rolled away from long grinds. I finished my drink, paid and left.

On our first return journey to our apartment the neon lights led us home from the metro stop. Rolling down smoothly paved streets lined with strip clubs and sex shops, avoiding the littering of harlots. The shear number and blatancy of the girls took me aback. I’ve not seen so much sex on sale outside of Amsterdam’s De Wallen.

We ate fast food, drank Berliner Kindl and got mellow back at the digs as the crew made plans for the next day.

The hardier guys then went out to find nighttime entertainment with Swampy at the helm. These night adventures became the norm and it became apparent to me pretty quick that Nicky should always be left to check joints out when in new places. He’s the King of Good Nights Out and doing so leads to fetish bars, gay bars and strip clubs aplenty and hung over recounts of many stories the following day and although most protested the next morning about his choice of bars, we all seemed to have had great nights. May Nicky’s reign be long and prosperous! 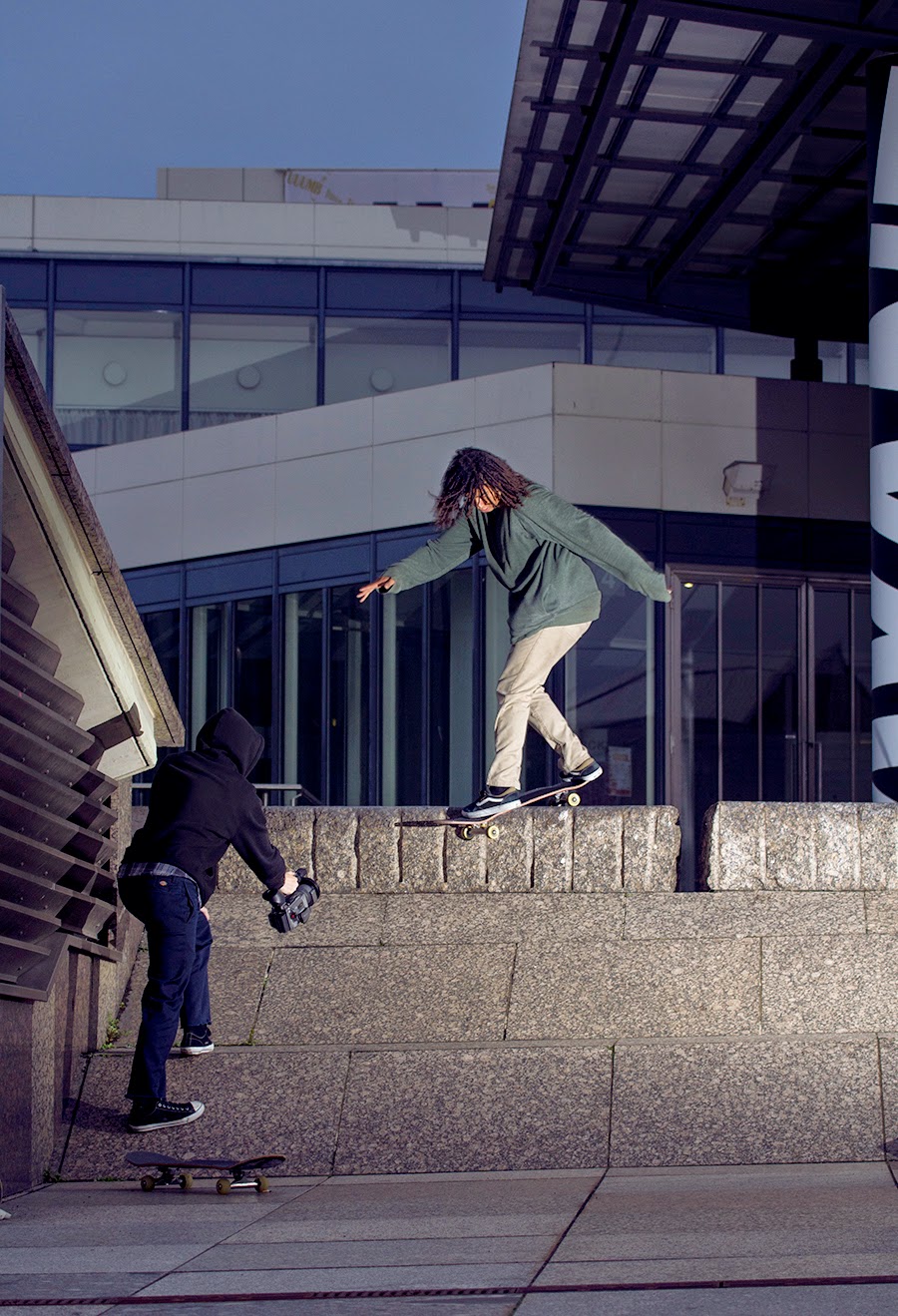 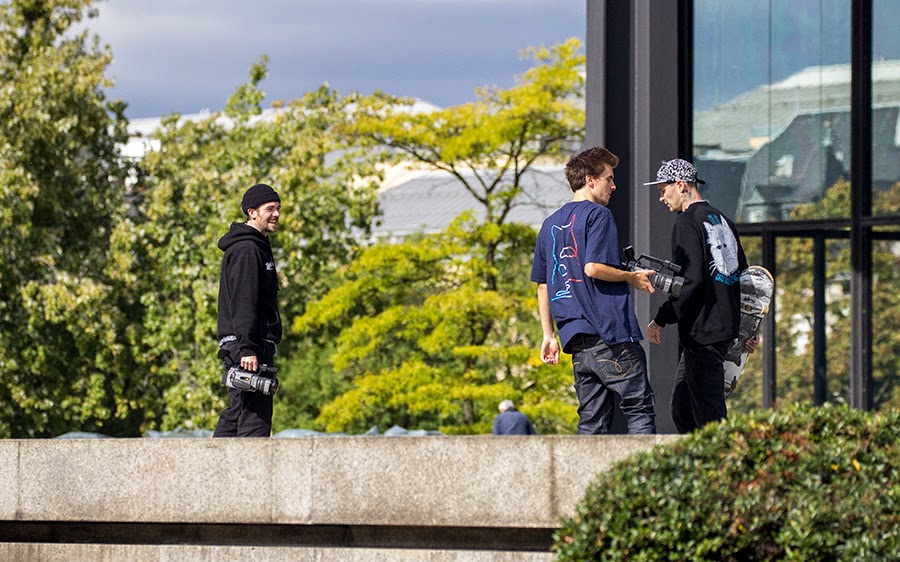 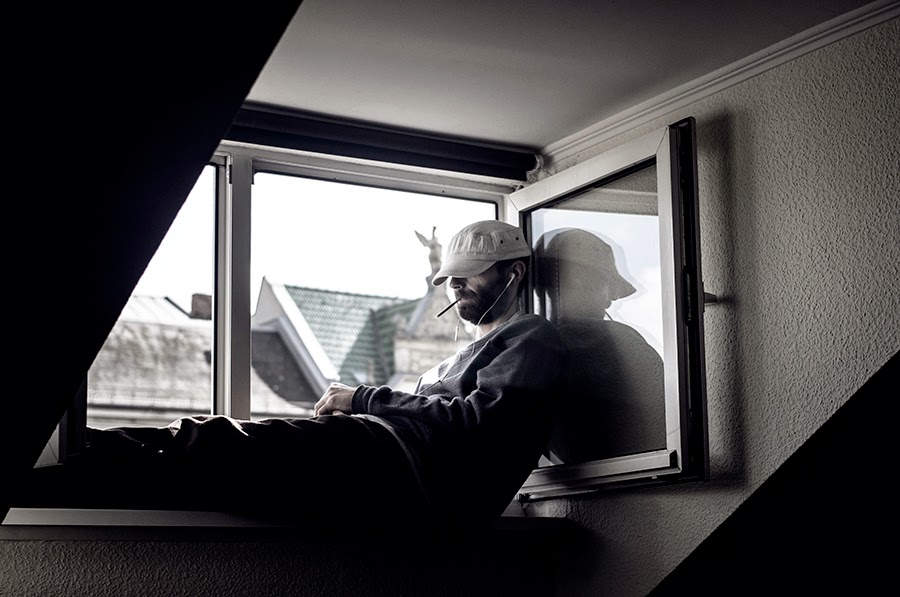 Morning rituals are revealed very quickly when you occupy an apartment twelve deep. Wake up times, bathroom habits, drink & breakfast choices, levels of activity before noon, all individual. And the balancing of this complex equilibrium can be the making or breaking of a day. From day one, Milk trip mornings have never been early affairs and the first spot of the day is often not hit until 11am. 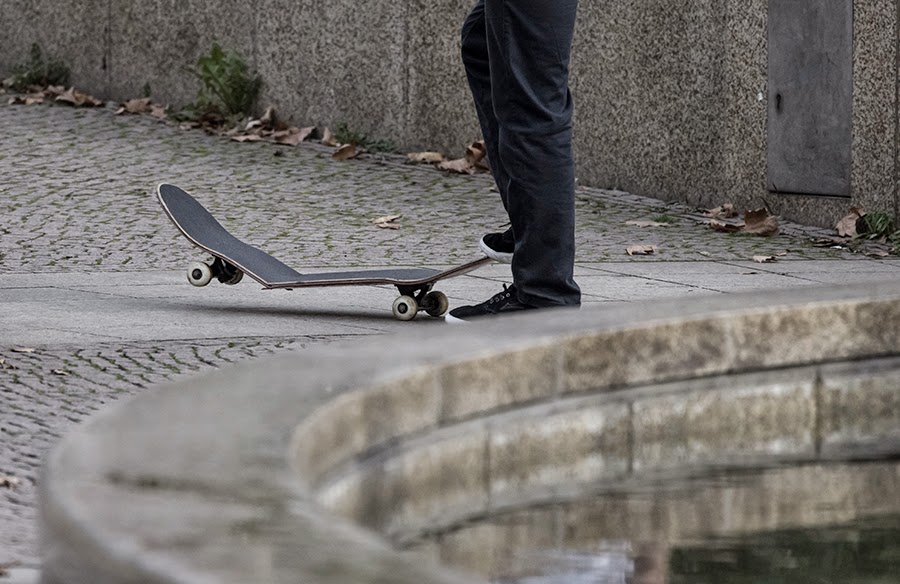 This does however enable the wise early riser to not only shower in peace but dig out the best bits of the locale and find good food and drink with which to start the day, leaving the horizontal to their slumber. Jasper & I seem to have a nose for good coffee and on both this and the Paris trip last year we’ve landed a real good cup of the morning fuel every day. These early excursions also resulted in some great lunch choices too. So much easier than trying to find food near spots when you find yourself hungry. Beer on the other hand was  close to hand anywhere in the city.
If you weren’t near a shop, you were near one of the multitude of mobile liquor stores hugging the pavements by park gates, traffic lights and most metro stations. 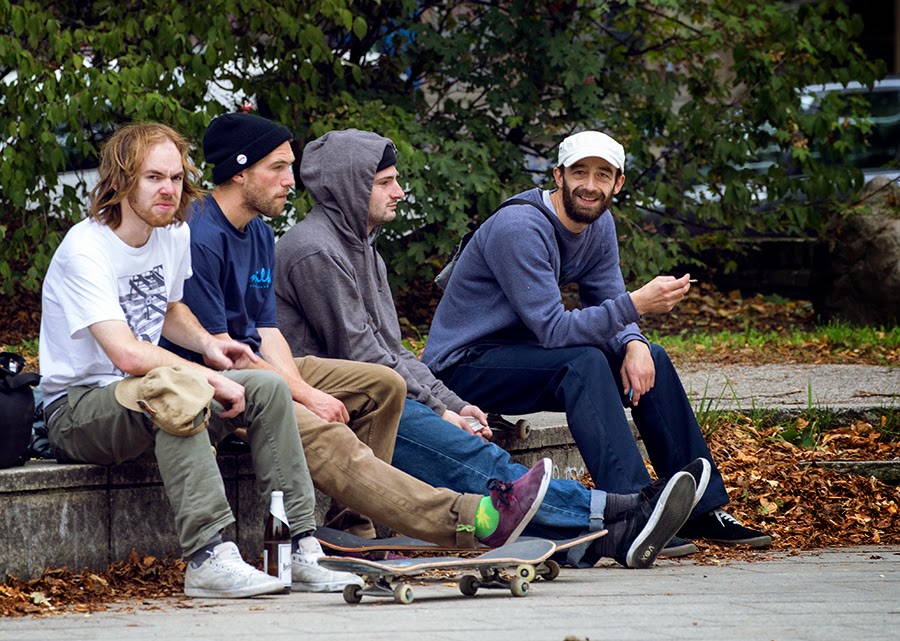 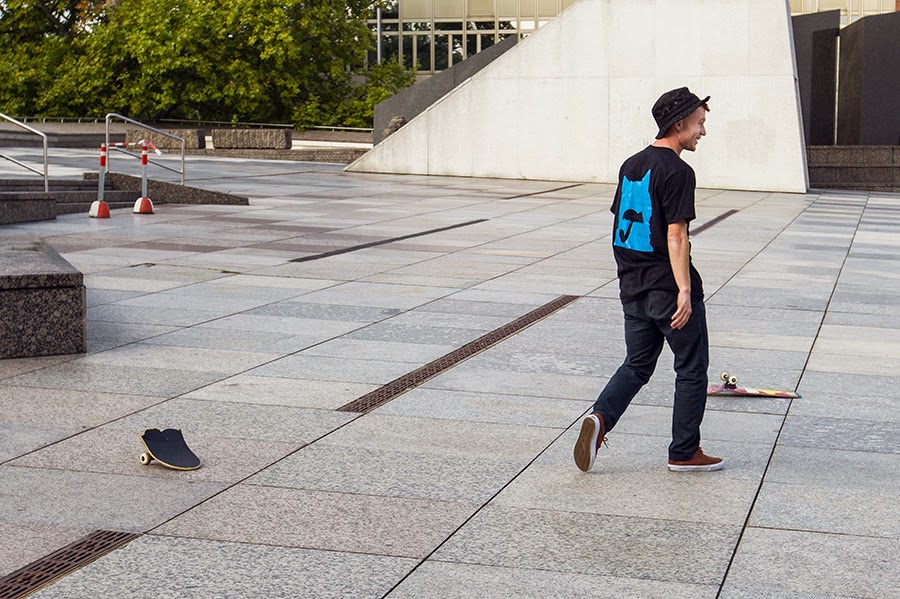 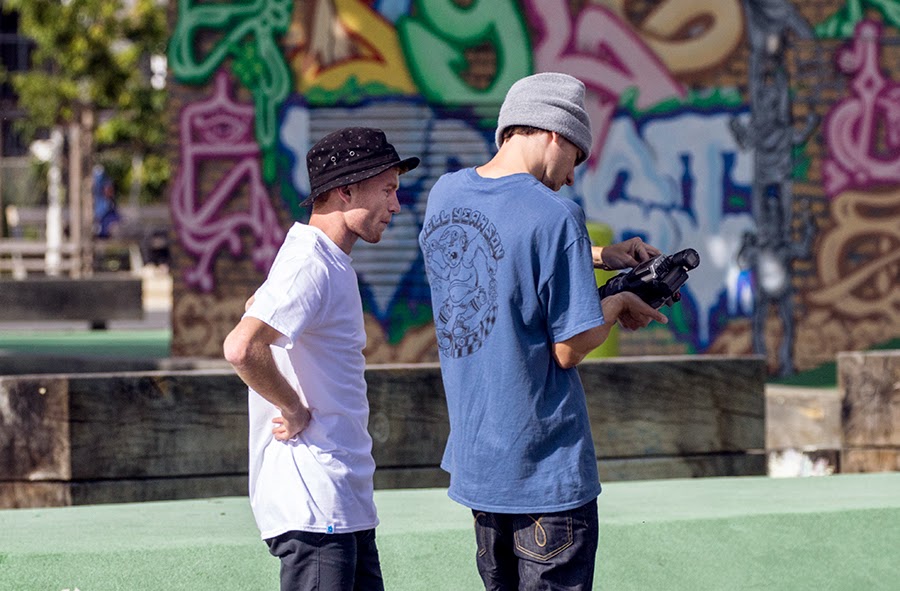 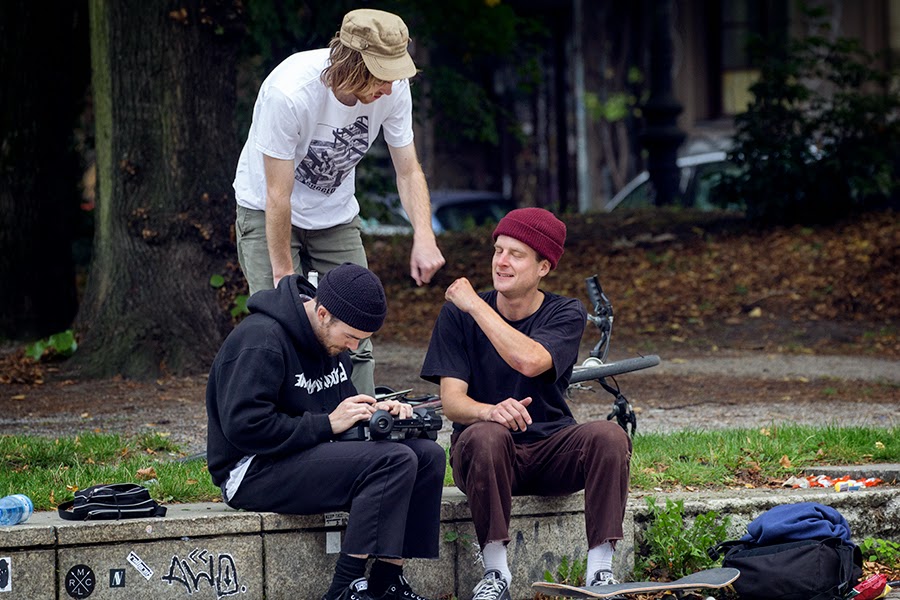 finding that elusive dry spot that we all imagine optimistically must be just round the corner. 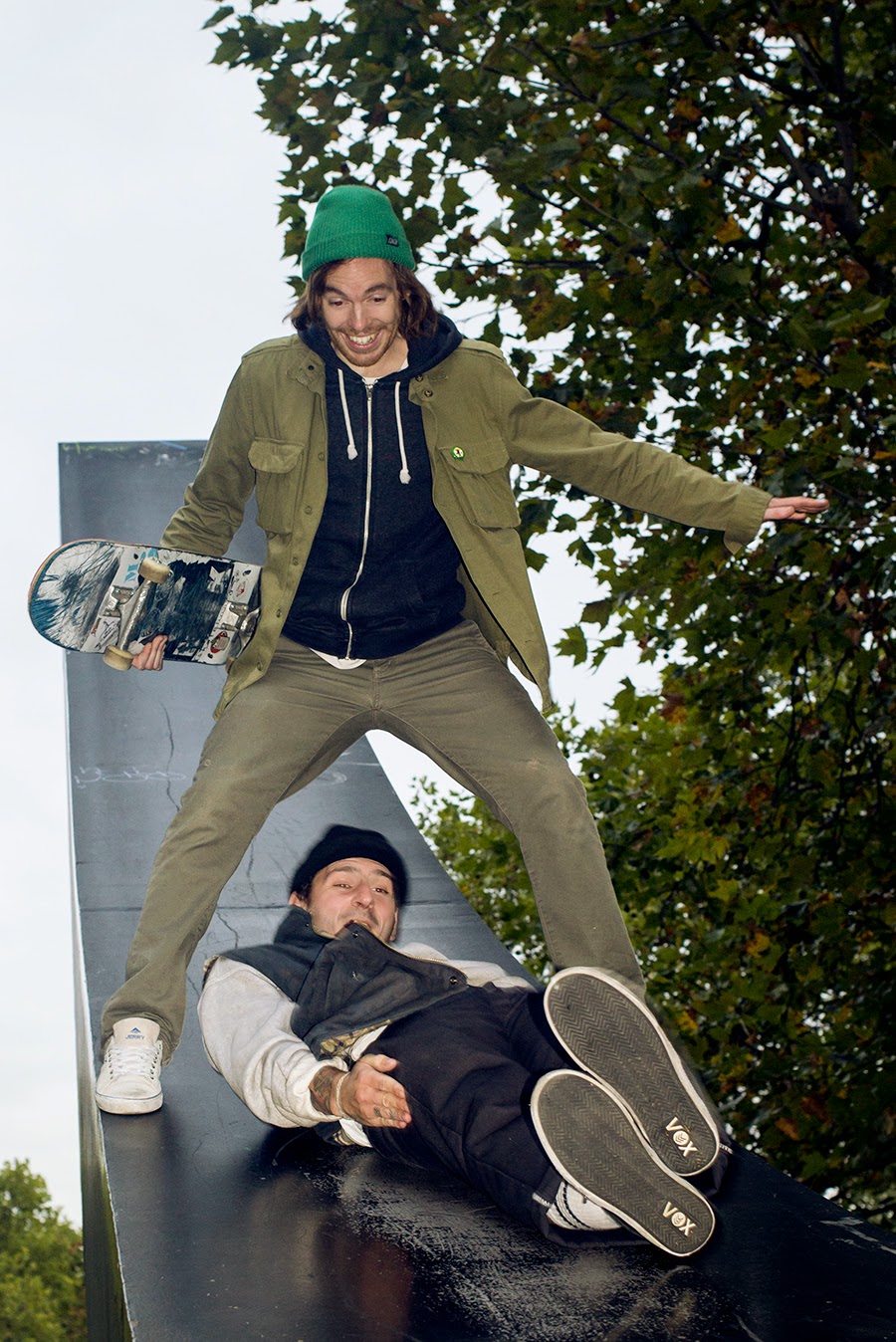 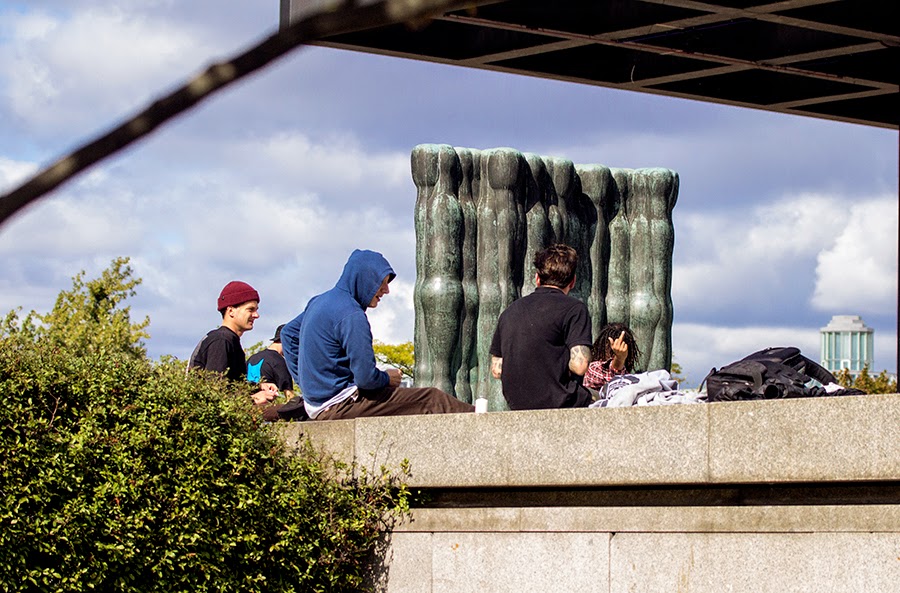 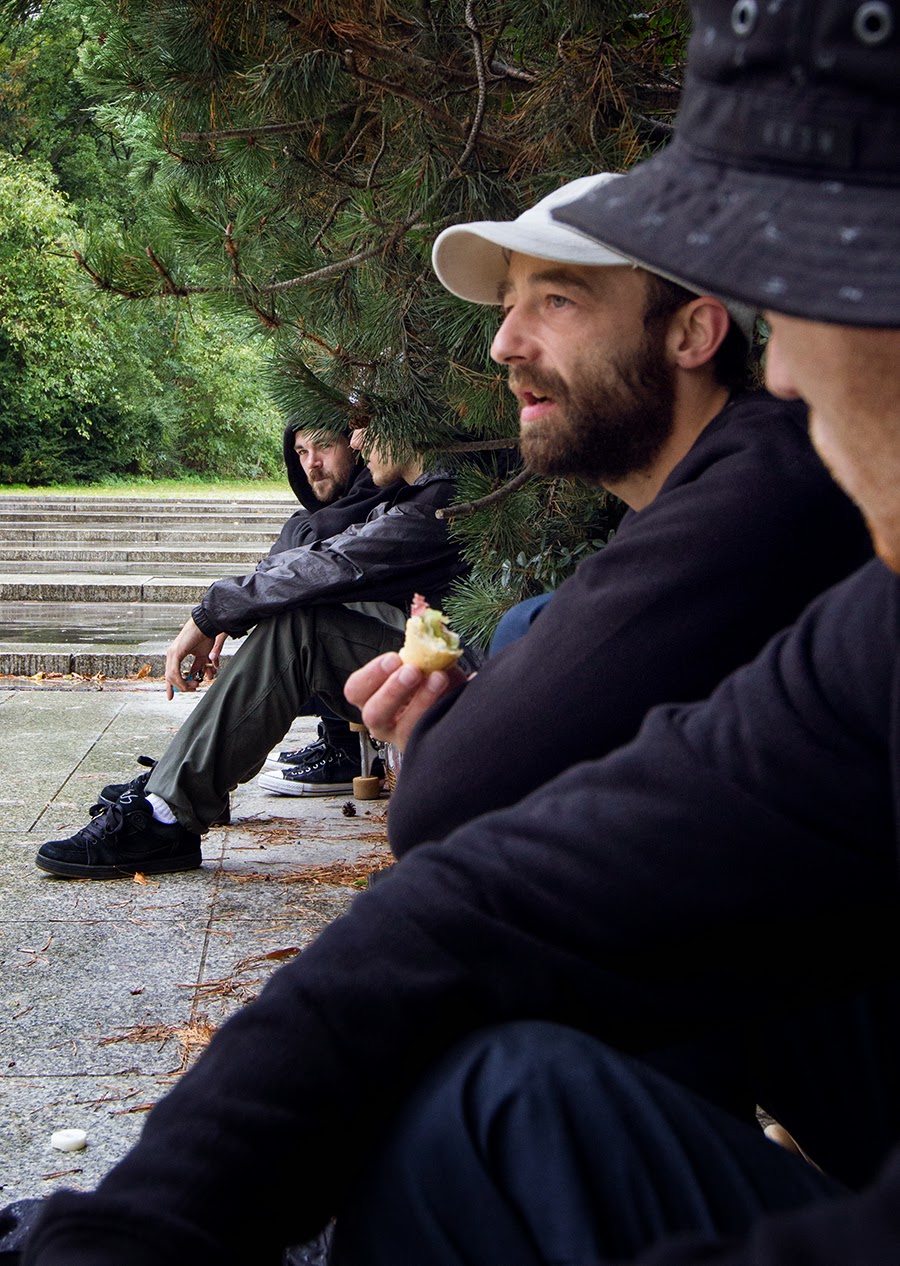 One of the issues you do face when skateboarding in Western Europe during autumn is that generally, the dry days are outnumbered heavily by wet days. This can result in either a lengthy trail through unknown streets in the vain hope of finding that elusive dry spot that we all imagine optimistically must be just round the corner. Or, you find an indoor skate park or car park. We, on the first wet day of the trip did a bit of it all. Travelling across town to the Mitte district we found a spot that Jasper wanted to hit, under a bridge “possibly dry?” We thought. We arrived to find it very wet and being rained on. Jasper, to my amazement hit it anyway coming away with a good bit of film and a couple of stills. We quickly moved on and hid from the incessant rain in Titus Skate Shop, which has a small concrete bowl in it. Jordan’s wayward board nearly destroyed the shoe display, but when he stopped and apologized the owner told him not to be stupid and to get the trick. Jordan obliged.

The crew decided after a while to find a bar and blow skating off for the day. Nobody seemed
interested in visiting an indoor park. On the way home a couple of guys rode into a multi story car park behind a hotel which resulted in everyone taking the lift to the top level and racing down the spiralling ramps to the exit over and over for an hour and a curb and manny pad session late into the night.
The clouds broke on occasion over the next couple of days so missions continued regardless of the frequent heavy showers and thick, wet mist. A few good spots were skated but way too much time was spent hiding under trees or waiting in cafes to make it a busy couple of days! But once the clouds cleared we were able to get on it once more for the last full day. 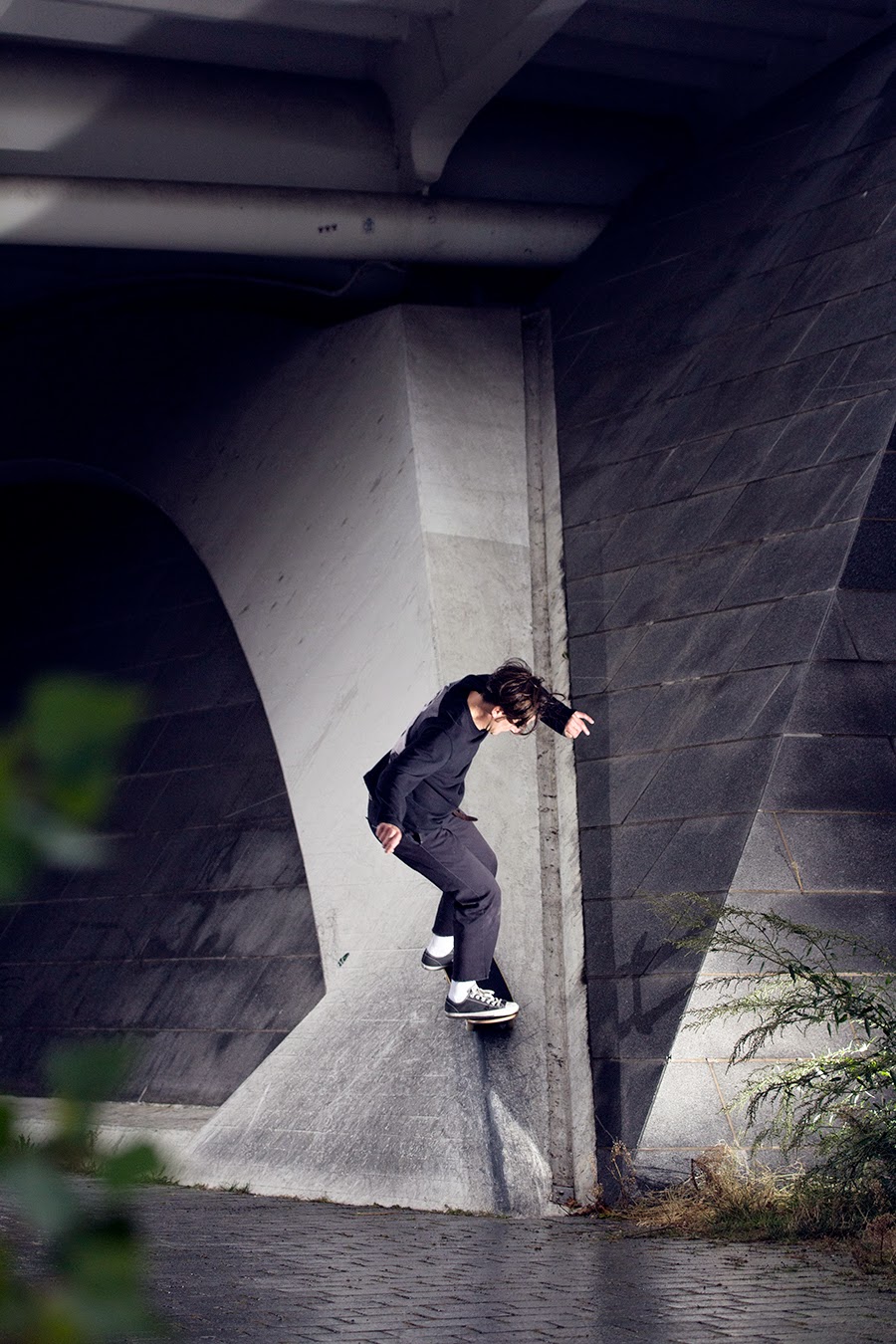 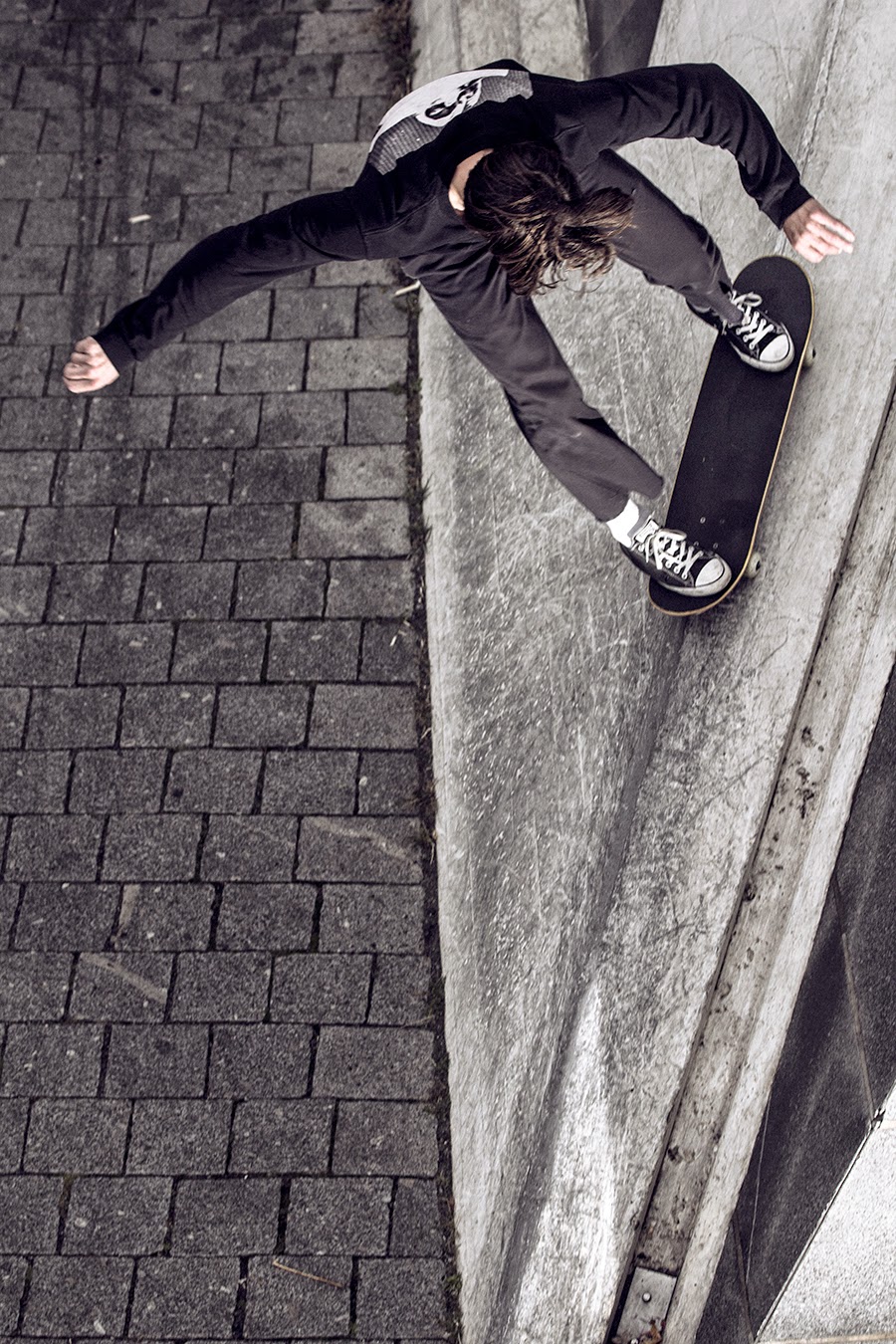 
One of our destinations for the day was a small DIY spot near Warschauer Bridge. Arriving at the closest metro stop, we paused for supplies at a kiosk surrounded by beggers and drunks. From a distance I suddenly heard Charlie start shouting. 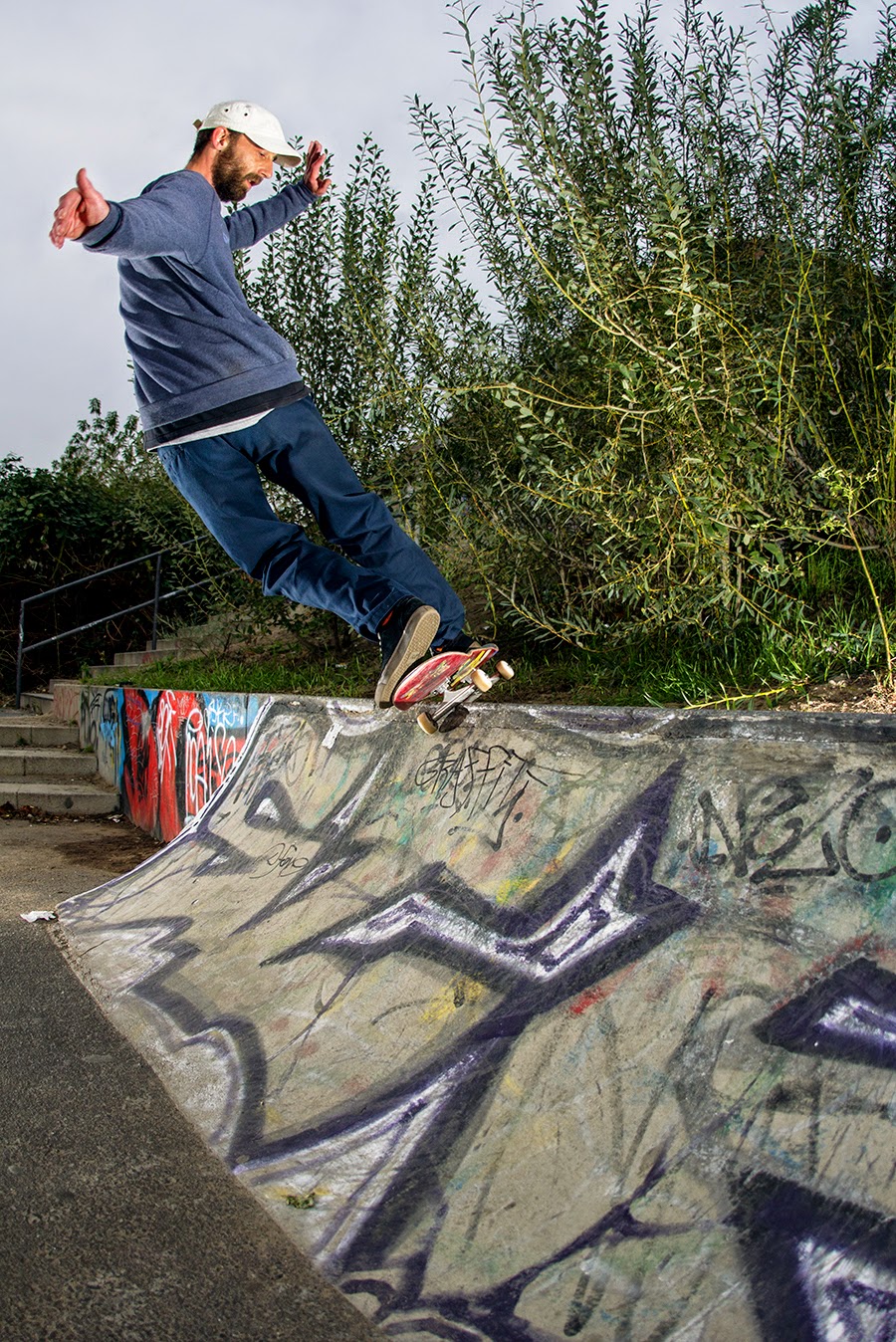 I turned to see a short man in a dark coat and hat stumble, waving the sharp end of a Stanley knife at Charlie’s stomach. As Charlie, in one motion stepped back snapping his board into his hand and coiling it over his shoulder preparing to unwind at the man, two fellas from the kiosk grabbed the short pointy fella and pulled him away. We took our chance and grabbed Charlie swiftly skating off up
the street towards the spot. 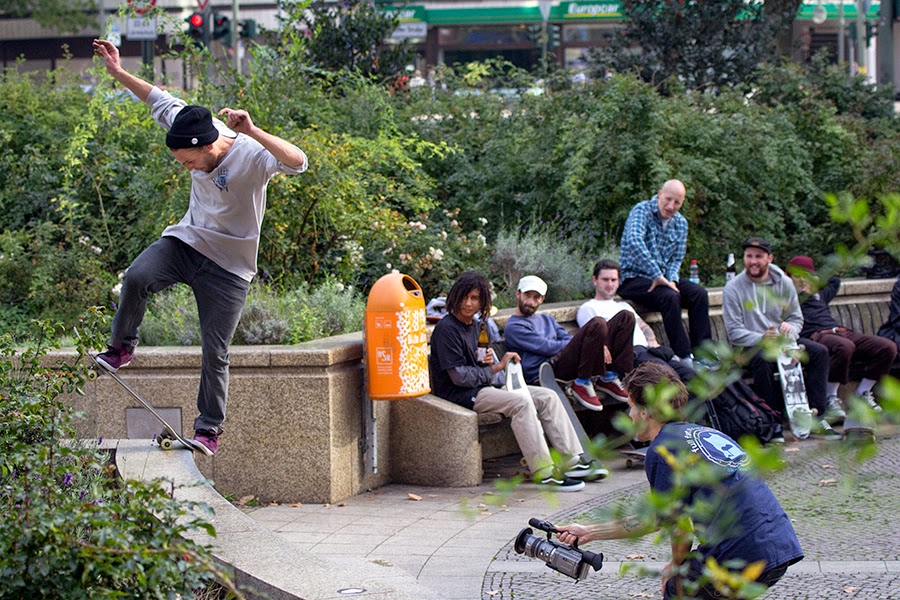 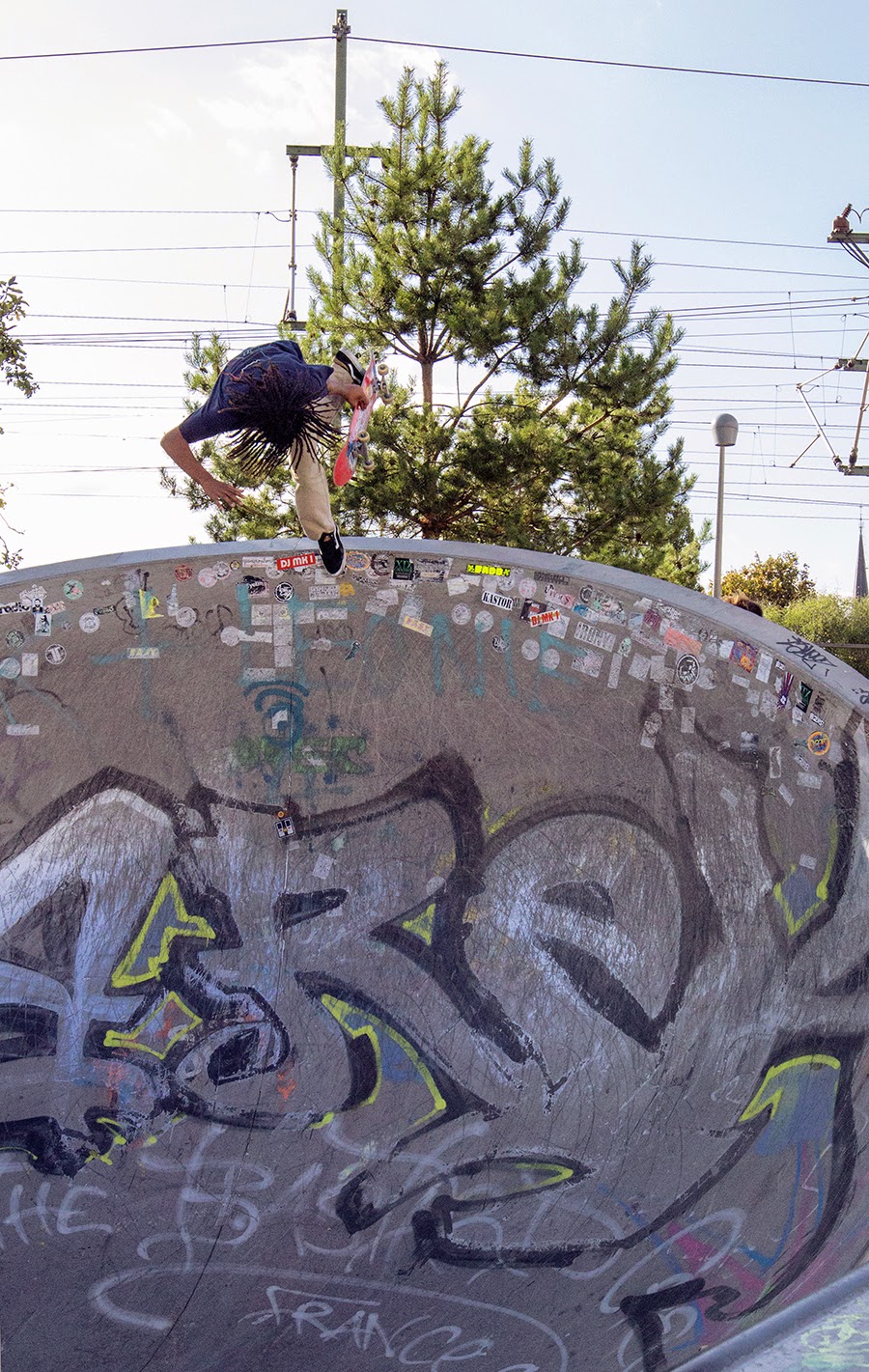 Fuller and I
sat back, enjoyed a
few beers
and watched
the mayhem
unfold 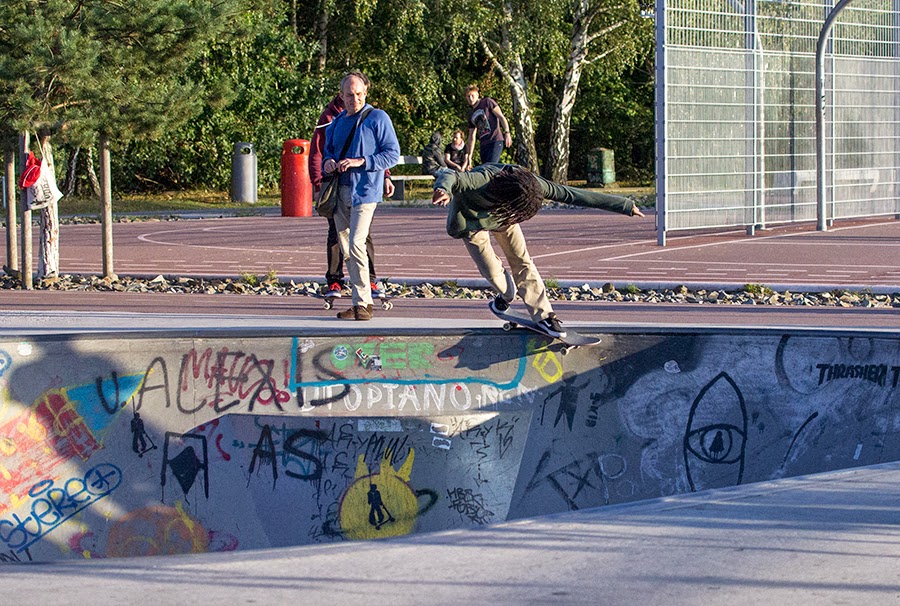 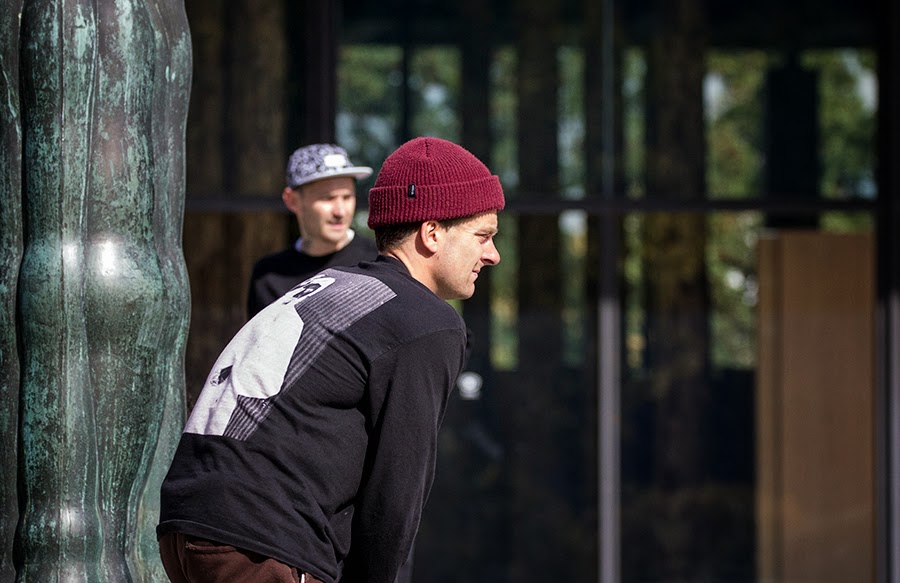 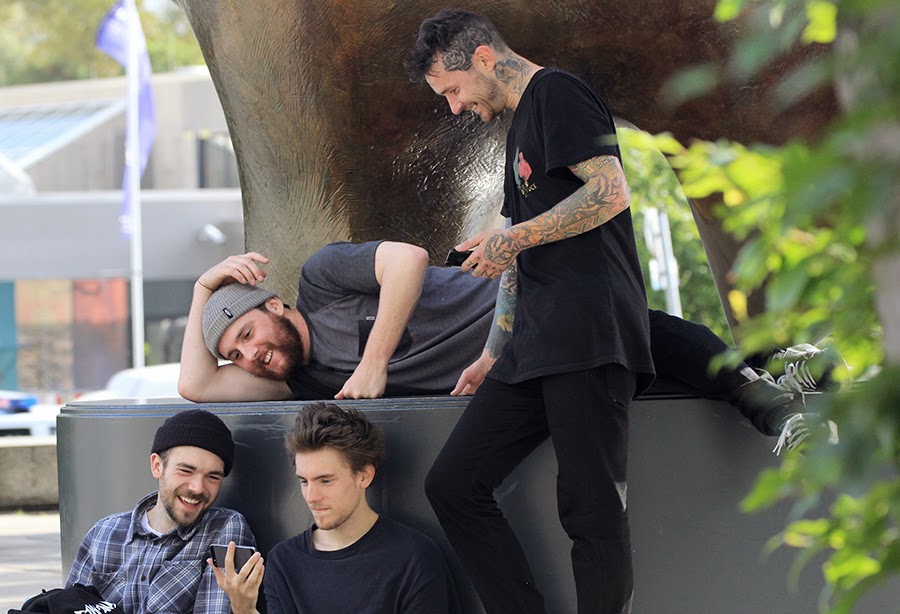 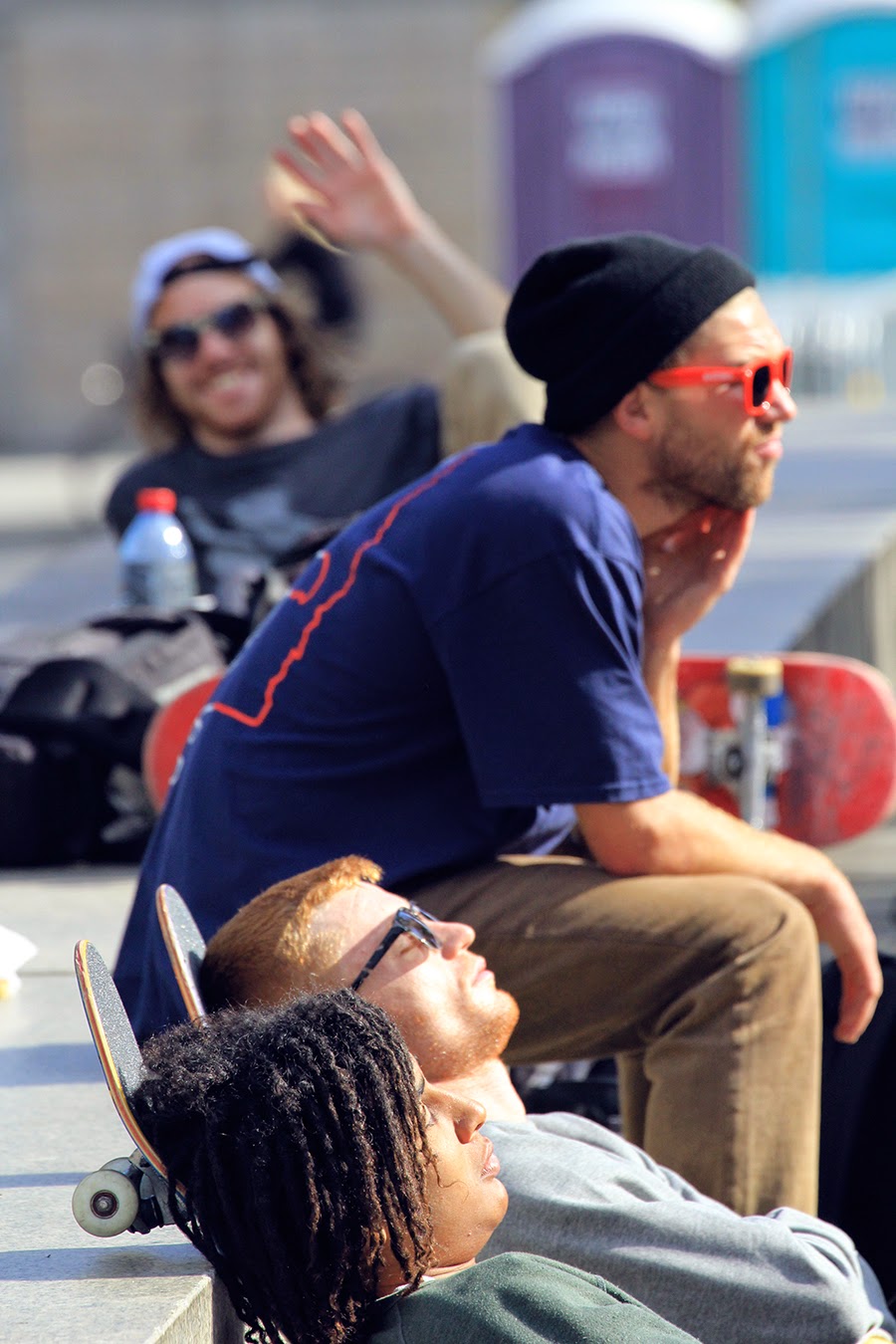 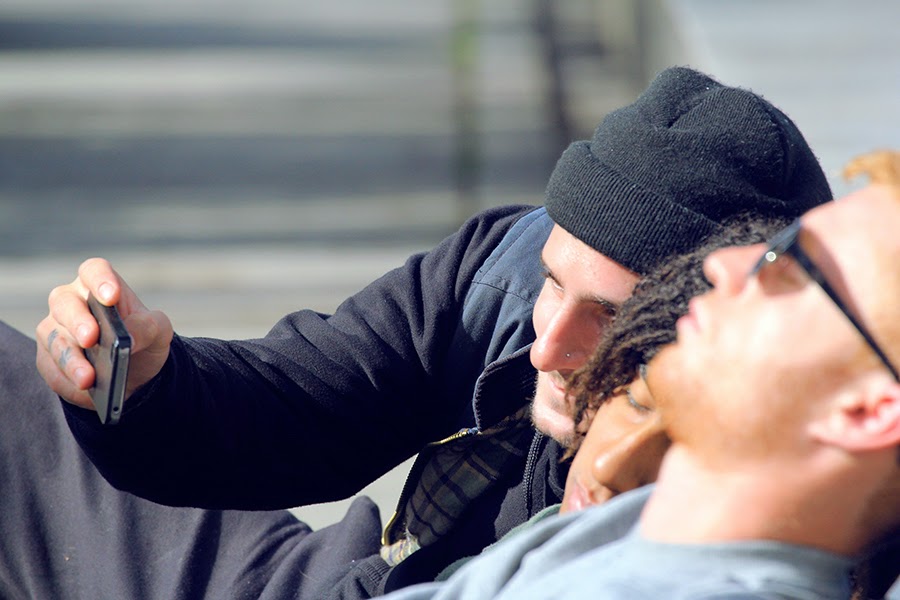 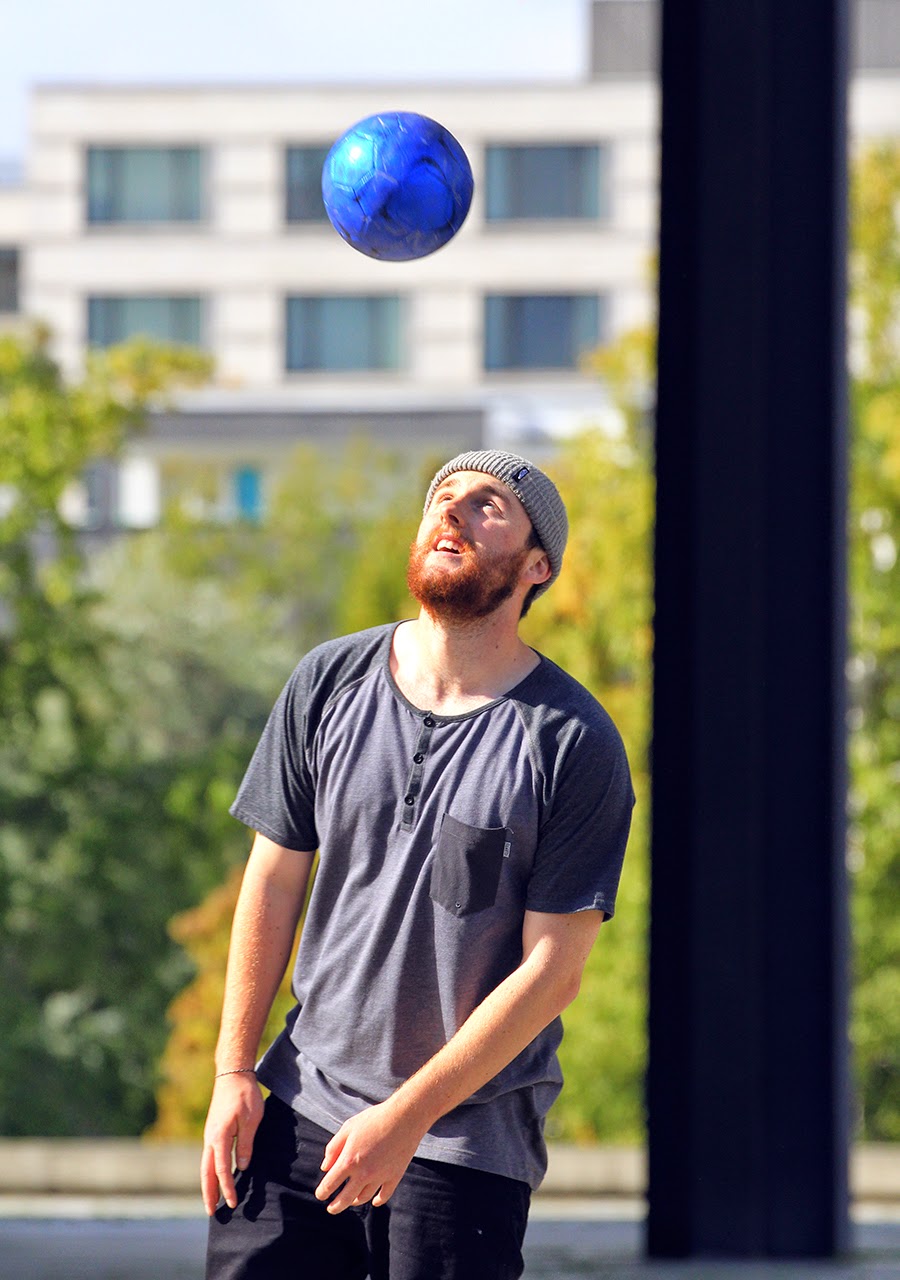 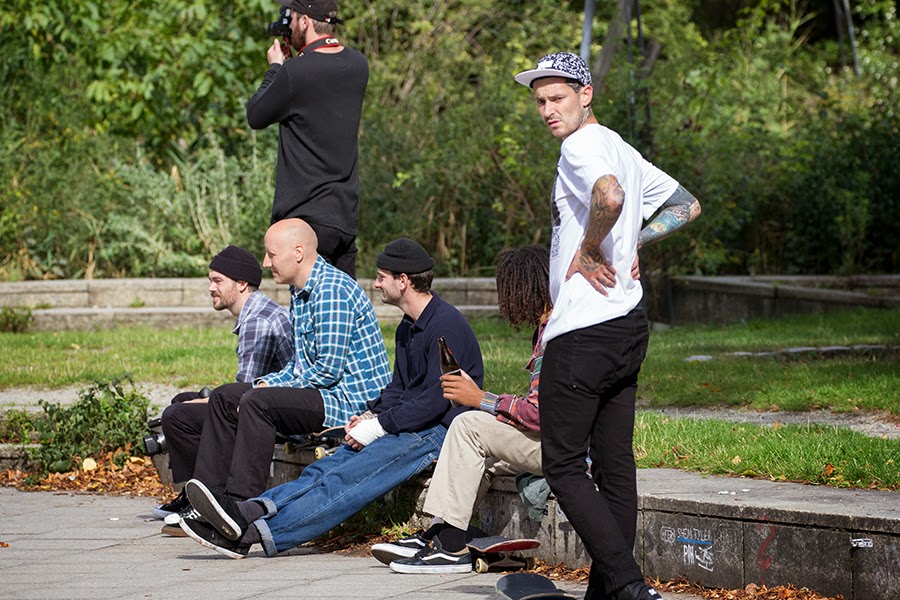 Once skating and a friendly kick-about with the Warschauuer locals were done a communal meal was devoured and many beers were sunk before the entire apartment stepped out for a final nighttime adventure. Fuller and I sat back, enjoyed a few beers and watched the mayhem unfold in, and outside a couple of bars before leaving most of them at the doors of a dodgy techno club with proper moody-looking bouncers. 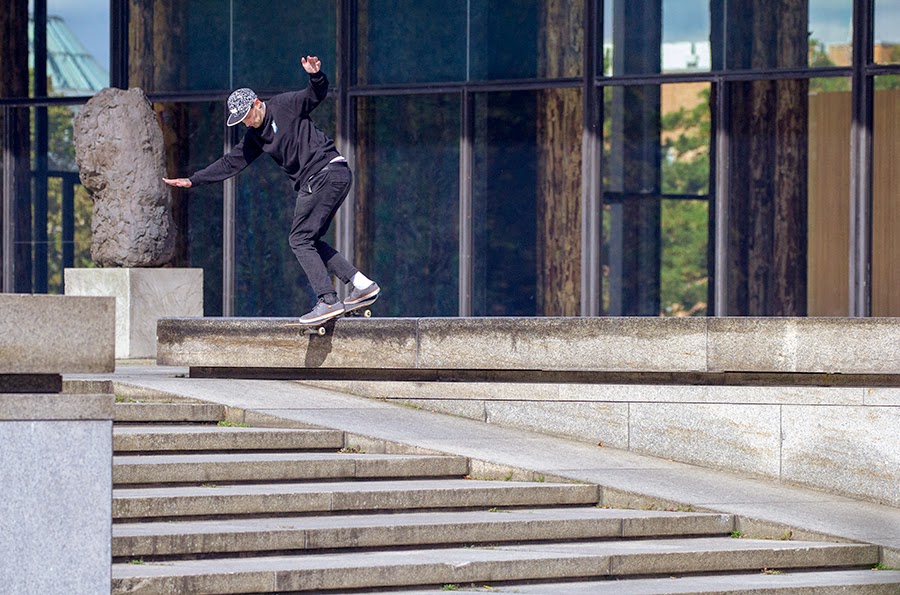 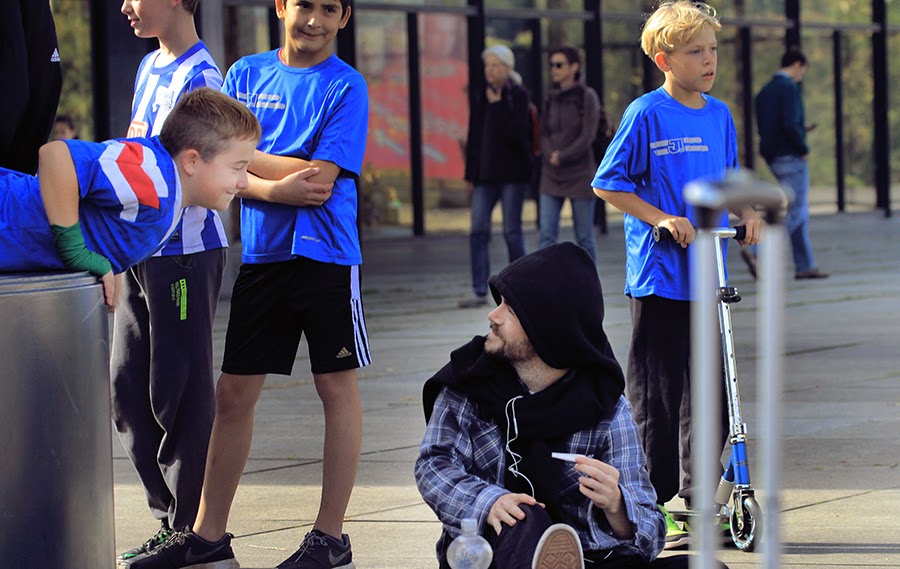 The owner of the apartment had told us to be out by 10am
on the last day so out we went, on the dot.
Some dragged out
by others, but out all the
same, leaving a distinctive
smell and the kitchen floor completely covered in empty beer bottles collected throughout the last week. Not wanting to hang around to witness the anger of the landlord we fled the scene to a paved space outside the
Neue Nationalgalerie where we spent a couple of hours filming some final lines and many of the crew slept off the previous night before the short flight home. 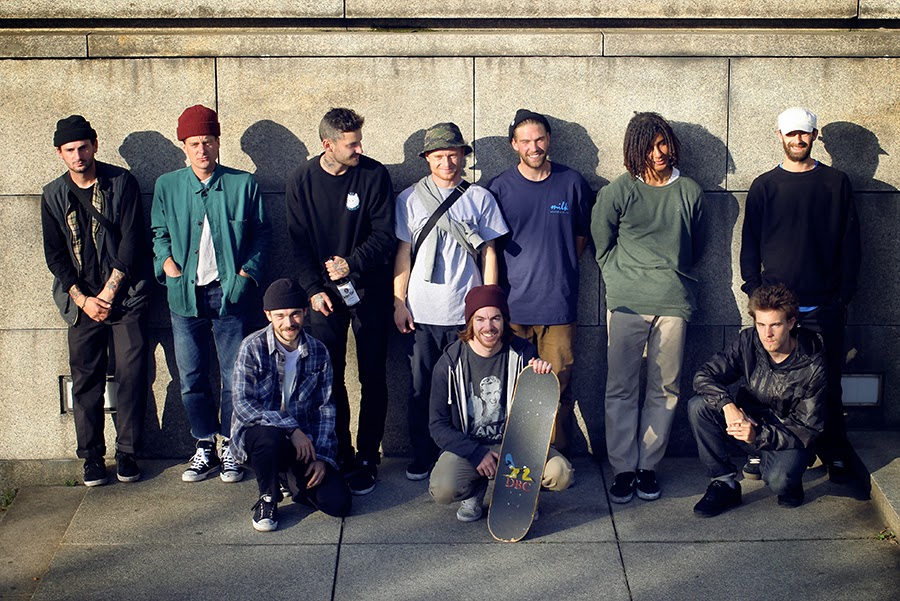 You can see footage from this trip in a number of Fresh Milk edits available at www.milkskateboards.com.